Anachronisms and Time Travel Content from the guide to life, the universe and everything 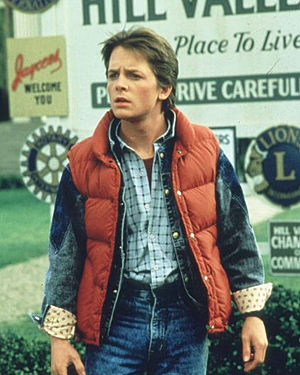 Anachronism literally means 'out of time'. It can be any object or event that appears out of place because it isn't appropriate for the time. If you see an Eminem poster in a film about wartime France, then you're experiencing an anachronism. The Eminem poster is an object from the future, compared to the setting of wartime France. It might be described as a regressive anachronism.

Similarly, if you wandered into Marks and Spencer and saw their Autumn Range consisted of saber-toothed tiger-skin loincloths, they would also be anachronisms, as well as incurring the wrath of the anti-fur lobby. The tiger skins are objects from the past, compared to the setting of present day M&S. They might be described as progressive anachronisms.

Many people have toyed with the concept of time travel and the paradoxes it presents. Time travel throws up many difficult questions: What would happen if you went back in time and killed your grandfather as a child? Where does fate fit into all this? What does it mean to have an effect without a cause? Some of these concerns can be resolved by looking to parallel universe theories or other bold new perceptions of reality, but these, in turn, spawn questions of their own. People like to play with the big picture.

Physicists tell us that while it may be possible to move forward through wrinkles in time, it may not be possible to move back. This is arguably the same thing as saying that they just don't know. Despite the dubious science, and despite (or possibly because of) the questions above, there are books, films and TV programmes galore which play with the spirals, circles and paradoxes of subverting causality by going into the past or future. These stories often include anachronisms, and the chance for actors to dress up in amusing period costume.

This Entry deals with just one of the questions of time travel: If it is possible to travel in time, why isn't there any historical evidence? This is a good question. What time traveller could resist the temptation to walk the streets of ancient Athens? What future historian would pass up the opportunity of a field trip to the Renaissance? The basis of this argument is that 'there are no anachronisms, so there never will be any travellers with time machines'.

This is an argument which cuts both ways: other people take a look at history and cause and effect, and find things which appear not to have happened in a sensible chronological order. Could these anachronisms be proof that time travellers from the future have already affected our history? Some subscribers, particularly science-fiction and fantasy writers, take this further. They suggest that time travel is possible, but since there are so few anachronisms they postulate a 'Time Police'. This band of people are supposedly dedicated to correcting errors and eddies in the space time continuum, returning history to its 'pure' path as if it had not been tampered with.

So, there might be a scarcity of anachronisms either because of Time Police, or because time travel is impossible. However, there are other (less dramatic) explanations:

Some people argue that these examples and others show that there have been careless time travellers and show that Temporal Secret Agents have been here on containment and damage limitation missions. These are said to be the smoking guns of the ultimate conspiracy theory.

1It is appreciated that the invention of time travel may expand available time; however, the argument is still valid.