The London Beer Flood of 1814 Content from the guide to life, the universe and everything 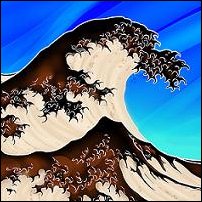 FREE BEER!
Now that we have your attention...

The shout, or placard, of 'Free Beer' is often a hook to get people interested in something, but never did the two-word expression have more of a ring of truth to it than on Monday 17 October, 1814 - the day of the London Beer Flood.

Meux's Brewery Co Ltd, established in 1764, was a London brewery owned by Sir Henry Meux1. Meux, like many modern brewers, bought out smaller breweries - one such being the Horse Shoe Brewery2 (founded by a Mr Blackburn, and famous for its 'black beer'), located on the junction of Tottenham Court Road and Oxford Street, London. Atop the Horse Shoe stood several large vats of beer. The largest was the porter vat - a 22-foot-high monstrosity that held 511,920 litres of beer, in turn held together by a total of 29 large iron hoops. For some idea of its vastness, The Times report of 1 April, 1785 read:

There is a cask now building at Messrs. Meux & Co.'s brewery...the size of which exceeds all credibility, being designed to hold 20,000 barrels of porter; the whole expense attending the same will be upwards of £10,000.

Come October of 1814, the beer had been fermenting atop the brewery for months (as was the need with porter), and the metal and wood of this huge vat was, unbeknownst to the majority of the brewery workers3, beginning to show the strain of holding back the thousands of litres. Suddenly, at about 6.00pm, one of the heavy metal hoops snapped and the contents of the porter vat exploded out - quite literally - causing a chain reaction with the surrounding vats. The resulting noise was apparently heard as far away as five miles!

A total of 1,224,000 litres of beer under pressure smashed through the twenty-five foot high brick wall of the building, and gushed out into the surrounding area - the slum of St Giles. Many people lived in crowded conditions here, and some were caught by the waves of beer completely unaware. The torrent flooded through houses, demolishing two in its wake, and the nearby Tavistock Arms pub in Great Russell Street suffered too, its 14-year-old barmaid Eleanor Cooper buried under the rubble. The Times reported on 19 October of the flood:

The bursting of the brew-house walls, and the fall of heavy timber, materially contributed to aggravate the mischief, by forcing the roofs and walls of the adjoining houses.

Fearful that all the beer should go to waste, though, hundreds of people ran outside carrying pots, pans, and kettles to scoop it up - while some simply stooped low and lapped at the liquid washing through the streets. However, the tide was too strong for many, and as injured people began arriving at the nearby Middlesex Hospital there was almost a riot as other patients demanded to know why they weren't being supplied with beer too - they could smell it on the flood survivors, and were insistent that they were missing out on a party! Calm was quickly restored at the hospital, but out in the streets was a different matter.

Back at the brewery, one man managed to save his brother from going under the vast wave, but as the tide receded the true damage could be discovered. The beer tsunami left nine people dead4; many had drowned (like Mary Mulvey and her 3-year-old son Thomas), others were swept away in the flood and died of the injuries they sustained (two young children: Hannah Banfield, 4, and Sarah Bates, 3), and the final victim actually succumbed some days later of alcohol poisoning - such was his heroic attempt to stem the tide by drinking as much beer as he humanly could.5

Because of the poverty of the area, relatives of the drowned took to exhibiting their families' corpses in their homes and charging a fee for viewing. In one house, though, too many people crowded in and the floor gave out, plunging them all into a cellar half full of beer. This morbid exhibition moved locations, attracting more custom - and eventually the police, who closed the doors on the horrible circus. Later, the funerals of the dead were paid for by the St Giles population, coins left on their coffins. The stench of the beer apparently lasted for months, and after the initial excitement, many found both their homes and livelihoods swept away with the flood. In amongst the misery of clearing away the dead and cleaning up the streets, though, there was compassion. The Times concluded:

The emotion and humanity with which the labourers proceeded in their distressing task excited a strong interest, and deserves warm approbation.

The Meux Brewery Company was taken to court over the accident, but the judge ruled that although devastating, the flood was an 'Act of God' and the deaths6 were simply by 'casualty'. In other words, no party was to blame, and the company continued working despite the incident. Up until 1961 that is, when it was sold to Friary, Holroyd and Healy's Brewery Ltd of Guildford. The firm became Friary Meux Ltd for only three years, before being bought outright by Ind Coope (& Allsop) of Burton-on-Trent.

The London Beer Flood isn't the only strange flood to occur, mind you (apart from the biblical kinds). On 15 January, 1919, a huge tank of molasses collapsed in Boston, Massachusetts, causing a gigantic wave of the black, sticky liquid to rush through the city - leaving trains and houses in its wake. 21 people died in the disaster, and it took months to clean up the mess.

So, be careful when you dream of free beer (or molasses), you never know in what form it might appear!

1Conservative MP for Hertfordshire in the years 1847 - 1859.2The horseshoe eventually became part of the Meux Brewery logo.3Storehouse clerk George Crick had noticed a small crack in one of the hoops and let the vat builder Mr Young know, but he felt that since it weighed 500lbs, and was a companion to 28 others, it would be fine.4Including Eleanor Cooper who had suffocated under the rubble of the Tavistock Arms.5This, however, may be an urban myth perpetuated by the penny dreadfuls of the time.6Those already mentioned, but also Ann Saville, 60, Elizabeth Smith, 27 and Catherine Butler, 63.