Joanna Lumley OBE: Actress and Activist Content from the guide to life, the universe and everything 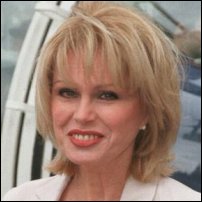 We are all dispensable, but the planet and the environment are not. Somebody has to go and hammer on the door of the big boys, because they're not listening.
– Joanna Lumley

The soft, plummy tones are unmistakable, the expression sincere, and the steely determination in her eyes is a sharp contrast to her stunning beauty. Joanna Lumley's presence guarantees the attendance of reporters and a TV crew, all eager for quotes for their newspaper or TV station, and her latest cause makes the evening news headlines and the next day's front page. Because she is so eloquent in her protests, people take notice. It helps that she is highly photogenic, but her most striking feature is her caring personality which shines through. This is a woman you want batting for your team.

Already, Joanna has campaigned for the Born Free Foundation to save endangered orangutans, and she was instrumental in getting a law passed to prevent duck farm workers cutting the beaks off live drakes. During the 2001 foot-and-mouth outbreak she protested at Downing Street (the residence of the British Prime Minister) about the culling of healthy animals. When she's not protesting, Joanna promotes education, in particular environmental matters; she is responsible for the Joanna Lumley Fellowship in Environmental Science at the University of Oxford.

Joanna made her world debut on 1 May, 1946, in Kashmir, India, and began her education in Hong Kong. Her family moved back to England and set up home in Kent, where the young Joanna attended a convent school. After attaining one A-level, she began modelling, attending screen tests for bit-parts to earn extra cash. Becoming a TV or film star wasn't Joanna's intended career; she wanted to perform on stage. One part she landed was playing a character in On Her Majesty's Secret Service – although this was a Bond movie, she wasn't what is now coined a 'Bond Girl'. Aficionados will recall this is the film in which George Lazenby's Bond gets married (to the character played by Diana Rigg).

Trivia buffs love to recite the fact that Joanna played 'Elaine Perkins', the girlfriend of 'Ken Barlow' in Coronation Street for a time, before turning down his proposal of marriage. Other roles Joanna has portrayed include a female incarnation of Doctor Who  (for Comic Relief), two different characters in the Peter Sellers classic 'Pink Panther' series, and a hitchhiker in the TV film The Plank.

The Great British public fell in love with this actress when she starred as 'Purdey' in The New Avengers. She was following in the wake of an icon, the leather-clad 'Emma Peel', unforgettably played by Diana Rigg. Joanna did her own thing, rather than try to replace the irreplaceable Mrs Peel, she made herself memorable. Wearing a long white dress, Steed's bowler hat and clutching a brolly, Joanna posed provocatively in front of a Rolls-Royce, flashing a small handgun tucked into the top of her stocking. That's what most men remember from the show's launch, anyway. Women recall the blonde 'Purdey bob' which, looking back, was more helmet than hairstyle, yet it was popular decades before the 'Rachel' (Jennifer Aniston's character in Friends) took over the world's number one most-requested haircut.

After she left The New Avengers, Joanna took on the role of the mysterious alien Sapphire in Sapphire and Steel, which ran from 1979 to 1982. Her co-star was The Man From U.N.C.L.E heart-throb David McCallum. Although not a huge success at the time, the show has achieved cult status among fans who demanded and got a DVD box set release promoted as the spiritual precursor to The X-Files.

Joanna's first love is the theatre, and she prefers performing live before a 'real' audience rather than for millions of 'invisible' viewers via television. Roles she has portrayed include: Desdemona in Shakespeare's Othello (1975), Georgia in Private Lives (1982), Hedda in Hedda Gabler (1984), Elvira in Blithe Spirit (1986), Ranevskya in The Cherry Orchard (1989), Miranda in Vanilla (1990), Imogen in The Revenger's Comedies (1991) and Lesley in The Letter (1995).

Joanna has one son, James, who was born out of wedlock in 1967. Hardly anyone bats an eyelid over a single mum nowadays, but in those days an unmarried mother might as well have walked through the streets ringing the 'unclean' bell. Her success as an model and actress adequately displays her toughness in the face of prejudice. For many years, Joanna steadfastly refused to publicly name her son's father, but eventually he was revealed as photographer Michael Claydon.

Joanna has been married to conductor and operatic composer Stephen Barlow since 1986. A joint collaboration between the couple is the children's story Rainbow Bear, for which Joanna narrated the audiobook.

Joanna would be a perfect wife, because she'd 'make do and mend' during a crisis but also 'scrub up nicely' when needed, know how to cook a meal from leftovers and is probably downright naughty in the bedroom!
– An h2g2 Researcher

In 1994 the BBC rather cruelly marooned Joanna on a desert island for ten days and she had to fend for herself, surviving on her wits and ingenuity. It never bothered her being filmed sans make-up, wearing hardly any attire and smiling through adversity while sporting a sunburned nose. What came across was this woman's total lack of pretentiousness, and how adaptable she was: what she did with her bra is etched on the memory of every viewer1. Joanna wrote a bestselling-book about her experiences during the making of the programme. The Girl Friday show was a ratings success and it is hailed as the forerunner to the reality-TV series which are so popular today.

Eurydice Colette Clytemnestra Dido Bathsheba Rabelais Patricia Cocteau Stone – we'll just call her 'Patsy' from Absolutely Fabulous – became a BAFTA award-winning comedic legend. The fictional champagne-guzzling, cocaine-sniffing, chain-smoking, party-loving, beehive-hairstyled, overly-made-up, snarling, media-hungry monster Patsy was played to perfection by Joanna for well over a decade before Amy Winehouse made it her lifestyle. Up until taking this role of Patsy, Joanna had been the perfect choice to play 'posh totty', someone you'd want to impress with the best Sunday china if she dropped by for a coffee any day of the week. Patsy was so far removed from this image that the effect was hilarious; the divine Ms Lumley endeared herself to the nation playing a 'permanent 39-year-old' disgusting lush. 'Patsy Stone' was listed in the 'Top 100' TV characters of all time, voted for by viewers. Ab Fab was broadcast on the BBC from 1992 to 1996 and revived in 2001, running until 2005.

In 1994 Joanna was awarded an Honorary Doctorate of Letters from Kent University 'for her contribution to the entertainment industry and her active charitable work', and she was honoured with an OBE in 1995. Her acting work has gained much recognition in the form of BAFTAs for Absolutely Fabulous as well as a nomination for A Rather English Marriage.

Joanna has one of the most instantly-recognisable voices in showbusiness; one of her many talents is being able to mimic just about any foreign accent. In the radio broadcast of The Hitchhiker's Guide to the Galaxy she voiced the 'Woman with the Sydney Opera House Head'. Her melodic tones welcome people logging into AOL. The audiobook The Hundred and One Dalmatians was narrated by Joanna, and who could possibly forget the seductive and sultry sound of Zaza the cat in Hector's House?

Joanna is a trusted friend of the British Royal Family, and an ambassador for Prince Charles' charity the Prince's Trust. When Joanna recorded the children's countryside stories audiobook Muck and Magic for charity, the foreword was recited by HRH Princess Anne. Joanna was one of the few thespians invited to the wedding of Charles and Camilla in 2005. More recently, she was spotted by a news crew outside the hospital where Prince Philip had been admitted, about to drop off a small bouquet. Eloquent and discreet as always, when asked whom she was visiting, she smiled and replied: 'My Auntie'.

After Joanna mentioned on Desert Island Discs that one of her ambitions was to see an aurora, she was approached by the BBC to make an odyssey to attempt to view the astral phenomenon. The long, slow journey by train, light aircraft, ferry, dog sled and snowmobile, always heading north, was filmed for the documentary Joanna Lumley In The Land Of The Northern Lights.

Along the way, they stayed in an ice hotel, with Joanna being given a 'night-cam' to record her thoughts. Having to prepare herself for bed she commented: 'imagine having a honeymoon here', because she had put on several layers of clothing, two pairs of socks, gloves, and a hat, and was exhaling 'hot breath' to prove to the camera just how cold it was.

One rather charming fellow she met was the mayor of a small town, who turned out in his full regalia to greet her. He explained that he was single and stood there, looking hopeful. Joanna hugged him, patted his ample chest and laughingly squealed at the camera: 'So I'm in with a chance, then?' causing the film crew to fall about laughing. Finally, the footage of Joanna silhouetted against the multicoloured, shimmering aurora was awesome, but the most moving part was when the cameraman caught Joanna in an unguarded moment, her face bathed in the reflected light, gazing in wonder and weeping with joy. The spectacular result was broadcast in September, 2008.

It was beyond any dream you could have. This particular showing was so spectacular that it was reported on Danish television news. It has all come from the Sun and our little tiny planet that we're trying to save... you see how majestic it is, and that it's part of the massive Universe, you begin to feel very humble. To be soppy about it, we had stars in our eyes. I'd been waiting all my life to see the Northern Lights and then I saw them on a scale beyond description.

Fighting for the Gurkhas

Joanna's father, Major James Rutherford Lumley served with the Gurkhas for 30 years. On 16 September, 2008, Joanna joined a group of protesters outside the High Court where a test case was being heard to allow five elderly Gurkha soldiers to remain in the UK. True to form, there were journalists and a TV crew to record Joanna's impassioned speech, as she posed with and saluted frail, wheelchair-bound, 91-year-old Lachhiman Gurung.

As she hugged 86-year-old Tul Bahadur Pun, who was instrumental in saving her father's life, Joanna was unable to stem the tears as she thanked him for his loyalty and bravery. From the High Court she headed for the BBC Breakfast studio and told the nation why the campaign to allow all Gurkhas to stay in the country they fought for means so much to her. She was intent on seeing justice done, and even threatened to renounce her own British citizenship and leave the country if the Gurkhas were made to do so. On Tuesday, 30 September, 2008, the test case was won and Joanna celebrated outside court with the old soldiers, their lawyer, and the Gurkhas' families and friends.

If there is a cause that asks for your voice and you believe in it, I think you should do it.

1For those unfortunate not to see Girl Friday, Joanna ingeniously utilised her lingerie to protect her toes from the unremitting pain of constant contact with sand.