Eating Out in Greece Content from the guide to life, the universe and everything 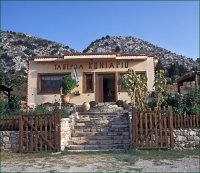 Eating out is a great way to spend an afternoon or evening in Greece. The Greeks enjoy eating out and it is a real family occasion; you will see large families including grandparents and small children all out for a meal together. Restaurants are informal - it doesn't matter what you're wearing. Feel free to make jokes with the waiter and he will undoubtedly try and crack a few himself (particularly if he knows you are Irish).

Greeks themselves eat late - they tend to have lunch at about 2pm and dinner very late at night - in Athens it can be difficult to find a restaurant serving before 9.30pm. In more touristy places, restaurants will open earlier; in resorts which cater for German tourists, the restaurants will tend to start serving at about 6.30pm. Whatever time you start eating, when you get a table in a Greek restaurant, you have the table for the night. You will not be put under any pressure to leave to make space for others.

Greek menus are always laid out in both Greek and English, so you shouldn't have too many problems reading the menu, but you won't always recognise the food, so that's where this Entry will come in handy.

If in doubt, you can always ask to see the kitchens and be shown the food, but this practice is now fairly rare. Back in the 1970s it was normal for all tourists to troop into the kitchen and point to what they wanted.

You will always be brought a basket of bread with your meal. You'll have to pay for this.

Greek waiters are so determined not to put you under any pressure to leave when you've finished that they will never be around when you want to ask for the bill. You may have to wait ten minutes just to catch the waiter's eye.

You'll usually be charged a small cover charge, which covers the privilege of sitting down at the table, but also includes the bread.

Prices do not normally include a service charge, so if you are happy with the service you received, be sure to include a tip. About 10% of the total bill will be perfectly acceptable.

Most restaurants offer the 'international cuisine' favourites of steak, spaghetti bolognese and pizza. You should, however, try some of the local Greek dishes. Meat dishes tend to be well-done so that the meat is falling apart. All Greek food is served warm rather than hot.

Since you're never far from the sea in Greece, all restaurants will serve a selection of fish and seafood. But not all of this is fresh from the sea. Much of it will be frozen. If you want freshly-caught fish, make sure to ask for it. Fish is usually priced by weight, so the waiter will weigh the fish for you and tell you how much the meal will cost. It tends to be more expensive than most of the other dishes on the menu, but well worth it.

Octopus and squid are both very popular in Greek restaurants.

Most Greek deserts are based on honey. Greek honey is delicious.

Most sweets are heavily laced with honey or golden syrup:

Greeks drink while they are eating. They don't tend to sit around all night drinking alcohol, except for perhaps the odd glass of ouzo.

Greek wine is mediocre in quality but adequate. What it lacks in taste, it makes up for in value - a jug of local wine will set you back about €2. For better-quality wine, try reds from Crete or whites from Santorini. Mavrodafni is a strong, sweet red wine which can have an alcohol content as high as 15%. It should be drunk carefully. Retsina is white wine to which pine resin has been added, giving it a taste like high-quality turpentine. It's not as popular as it used to be - the restaurants where you can buy a jug of retsina are getting rarer, but the bottled variety is of a better quality.

Greek beer is rare - there is only one generally available Greek-made beer, the pleasant-tasting Mythos. The Athens-based Alfa beer is poor in quality and hard to find. You will however find plenty of beer from Germany, the Netherlands, and so on.

It is a fairly common practice to present you each with a little glass of spirits with your bill. Sometimes even the children will be offered a shot of brandy! And occasionally the waiter will join you with a glass for himself.

Greek coffee is like Arabic coffee/Turkish coffee. The coffee is ground to dust and boiled up in a little copper pot. It is normally sweetened - you'll get funny looks from the waiter if you ask for unsweetened coffee. The coffee is served black in tiny cups, with a large amount of brown sludge at the bottom of the cup. You have to learn to stop drinking before you reach the sludge.

Espresso is available in most places, and is a good way of surviving if you are addicted to caffeine.

It is also possible to get Cafe Nes, which is any sort of instant coffee. Most restaurants don't know about what westerners call 'real coffee.' Look behind the bar for an espresso-making machine before ordering a cappuccino - many places will give you an instant coffee with spray-on cream on top.