Santorini - a Tourist Guide Content from the guide to life, the universe and everything 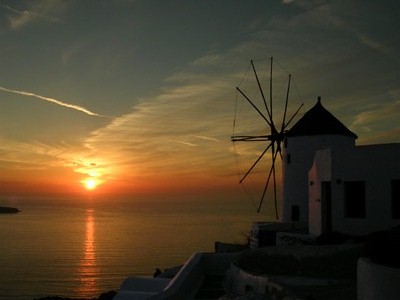 Santorini, also known as Thera, is the southernmost of the Kyklades islands in Greece. The entire island is dominated by the massive flooded caldera, or volcanic crater, left over from the eruption of 1645 BC. This was one of the most dramatic volcanic eruptions since civilisation began. You can read about it in the entry Santorini - Remains of a Volcanic Cataclysm. The entire island is a ring of rock around the central lagoon, with thousand-foot-high cliffs looking down on the lagoon. Santorini is well worth the visit and this entry outlines many of the sights for the tourist.

The tourist season in Greece is from May to October, with the most popular months being July and August. Santorini is inundated with tourists in the middle of summer, so expect delays, crowds and all the other stuff you get in any tourist place. But if you decide to go in the winter, be warned that half the population of Santorini only lives there during the summer months. These people who run the tourism industry all go home to other islands, so you will find many hotels and restaurants are closed.

There are two ways to get to Santorini. You can fly into the small airport at Monolithos. If you do this, try to get a window seat, because the views over the caldera are spectacular. The best way, however, is to arrive by ship. The ship sails into the lagoon and moors at one of the two ports at the base of the cliff.

Most goods and passenger ships come to the 'new port' of Athinios. This was built after the earthquake of 1956. A winding road brings you up the cliff in a series of hairpin bends. It is best for tourists to put their trust in the taxi driver or bus driver here, because they take this road at terrifying speeds. Don't close your eyes, though, or you will miss one of the most spectacular journeys of your life!

Cruise ships which are not unloading large amounts of goods tend to go to the old port directly below the main town, Fira, which is perched at the top of the cliff. Here the water is so deep that ships can't anchor: they are not fitted with anchor chains that long. The port authority has provided giant floating buoys which are anchored to the bottom. The ship can moor to one of these.

There are two ways up the cliff from the old port. There is a cable car, or you can ride on the back of a mule. Either way is interesting. Don't under any circumstances try to walk up the mule path. It is a 250m climb (820 feet), so you will be exhausted. In addition during the tourist season, there is the obvious hazard to your shoes from mule-droppings, and you are in danger of being pushed over the side by the mules, who appear to resent walkers. If you do decide to ride on the mules, watch out for your legs, as the mules like to cut corners and will scrape you off the wall if necessary. Going down on mule-back is even more exciting (read, terrifying) because the mules can run quite fast. Walking down the steps is not so bad, but you should allow at least 20 minutes for the trip, and you will feel it in your calves the next day.

The cable car, by comparison, is mundane and safe.

The main town and kitsch capital is Fira, although it is often called Thera after the old name for the island. It lives on its reputation for being the most picturesque town in the world. Whitewashed houses and churches perch on top of the cliff with the deep blue caldera beside them. Of course, every shop sells souvenirs: polished pieces of lava are very popular, as are pieces of pumice. Restaurants with a view of the caldera ask top prices.

Nevertheless, Fira is a good place to stay, because it really is spectacular, and has a good selection of hotels and restaurants.

This small museum is situated very close to the Cable Car Station. The entrance ticket gives access to both this museum and to the Museum of Prehistoric Thera. Entrance is free for children up to age 18.

Most of the exhibits in the museum are from Ancient Thera, the town dating from the 8th Century BC on the headland of Mesa Vouno. There are a large number of pots and urns, most coloured in red and black, and many with the symbol of a bird catching a snake on them.

The best things in the museum are probably the small figure of a mourning woman, and the model of a hoplite (Greek warrior) helmet. You can see the eyes of the head inside the helmet looking out.

Sitituated at the south end of the town, this museum is looked after by some incredibly grumpy curators, who will follow you around to make sure you don't lean against the walls or touch anything. The entrance ticket gives access to both this museum and to the Thera Archaeological Museum. Entrance is free for children up to age 18.

This museum is devoted to the findings from the Akrotiri site in the south of the island, where a Minoan village was found underneath a layer of pumice thrown out by the volcano just before the 'Minoan Eruption' of 1645 BC. The inhabitants of the village appear to have had warning of the impending disaster, as they cleared most of their possessions away, and no bodies were found buried in the village1.

The highlights of this particular museum are:

Trips to the Volcano

There are organised boat trips to the volcano in the middle of the caldera from Fira. You will have to make your way down to the old port. See above for the choice of mule or cable car. The trips usually bring you to Nea Kameni, the bigger and newer of the two volcanic islands. This is an active volcano - the central crater still gives off sulphurous fumes - but it hasn't erupted since 1950. It is about a 30-minute walk from the boat to the top of the volcano.

Some trips also go to Paleo Kameni, the older volcanic island. This is not so volcanically active, but there is a bay where the sea water is warmed by the volcano below. Swimmers are encouraged to swim from the boat into this bay, where the water is about 5 degrees warmer than the surrounding sea.

Pronounced 'ee-ah', this town is on the northernmost tip of the island. Like Fira, it perches on the top of the cliff; the town looks both inward on to the caldera and northward onto the Aegean Sea. This was once the main port for Santorini, until the entire town was razed by the earthquake in 1956. Today, it is like a smaller quieter version of Fira, and is an upmarket trendy place to be.

Oia is the best place to see the sun set into the sea, and in season bus loads of tourists are brought into the town each evening for this event.

For anybody interested in archaeology, a trip to Akrotiri is essential. This is on the south-western end of the island. Here, the remains of a Minoan town from before the eruption have been discovered, buried beneath tons of pumice. The houses are remarkably sophisticated. Some are three storeys high, and were plumbed with running water and flush toilets. Most of the houses had frescoes, that is, wall paintings, showing all sorts of different things: fishermen, boys boxing, young women gathering crocuses, a fleet of ships travelling from one port to another, accompanied by dolphins. These frescoes offer a wonderful insight into the lives of people 3,500 years ago. Unfortunately, the frescoes are no longer to be seen in Akrotiri. Two of them are on display in the Museum of Prehistoric Thera in Fira town, but the rest are in the National Archaeological Museum in Athens.

As of March 2005, the site in Akrotiri is closed to the public while a protective 'bioclimatic shelter' is being constructed. The new protected site should be opening soon. Check at the Hellenic Ministry of Culture Akrotiri site for details.

The highest point on the island is the mountain of Profitis Ilias. This is actually not volcanic and existed as an isolated rocky island long before the volcano started to erupt two million years ago. Today, the mountain is dominated by giant radio transmitters.

Where the mountain meets the sea, there is a headland called Mesa Vouno. Perched on the top of this, nearly 400m above the sea and out of sight of the rest of the island, are the remains of an ancient Greek city. This is now known as 'Ancient Thera'. It has been extensively excavated and there are many ancient Greek buildings, dating from as early as the 6th Century BC and as late as the 2nd Century AD. Ancient Thera was founded by the Dorians in the 9th Century BC and later used as a fortress by the Egyptian Greeks (the Ptolemys) in the 3rd Century BC. At the time, the main harbour on the island was just below the headland, on what is now Kamari beach.

The best way to reach Ancient Thera is from Kamari. You can walk up the zig-zag road which rises nearly 400m from sea level, or if you are feeling very confident, you can drive it. An easier way is by minibus or on a mule, during the holiday season, from Kamari. The ruins are run by the ubiquitous Hellenic Ministry of Culture, so they close very early, typically 2pm.

Santorini has two main beach resorts, with hotels, bars and nightclubs. Just north of the headland of Mesa Vouno is Kamari beach. Just south of it is Perissa beach. Both these beaches have coarse-grained black sand. The sand absorbs the heat of the sun, so it can be very hot in the middle of the day.

Santorini's main export, after tourist souvenirs and pumice, is wine. The volcanic soil is ideal for growing grapes. The vines are unusual: they are grown in a coiled shape that looks like a basket, rather than spread out on wires like in other places. This protects them from the wind, which can be quite considerable on the island.

Santorini wines all have obvious names like 'Santorini' or 'Atlantis'. The island is famous for sweet wines in both red and white varieties - the white wines are probably more worthy of note.

Trips to a winery are easy to come by - there are at least six different places around the island offering wine tasting to tourists. Beware! You will be expected to try a full glass of each of the different types of wine produced in the winery. At the end you may be in the mood to buy many bottles! Consider how you are going to carry these before you invest.

1The chief archaeologist of the site, Christos Doumas, believes it highly unlikely that they had enough boats to ship the entire population away from the island, and that eventually we will discover the bodies of these people huddling near the harbour.