The Second Amendment to the US Constitution and its Meaning Content from the guide to life, the universe and everything 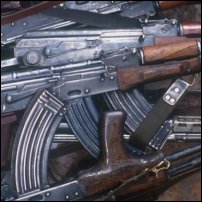 The Second Amendment to the Constitution of the United States of America reads:

A well regulated Militia, being necessary to the security of a free State, the right of the people to keep and bear Arms, shall not be infringed.

These 26 words have been the final word on the regulation of firearms in America for over 200 years. Gun control, as defined by Black's Law Dictionary (the standard in American law practice), is the laws 'which regulate the sale and use of guns and firearms in a variety of ways such as prohibitions against carrying concealed weapons or requiring a license to buy or possess a handgun or any type of firearm.'

These 26 words have already banned handguns in Morton Grove, Illinois. Yet the same 26 words have sparked the enactment of a requirement for all households to own at least one gun in Kennesaw, Georgia.

Why is America so focused on gun ownership that it was important enough for the Founders to make it an irrefutable right? How is such an extraordinary dichotomy derived from the same law?

Since the US has a long history with arms, its core natural rights foundation, and the strident voice of interest groups such as the NRA (National Rifle Association), the battle over gun control and the meaning of the Second Amendment remain perennial features of US life. To understand why bearing arms provokes such a continual debate, the history the US has with arms must be examined.

This dates back to the 12th Century, when King Henry III of England required every person between the ages of 15 and 50 to own a weapon other than a knife for personal security, since no British police existed until 1829. King James II, a Catholic, enacted arms restrictions in 1685 to persecute the Protestants who opposed him. After James was overthrown in the Glorious Revolution, the 1689 English Declarations of Rights secured Protestants the right to 'have arms for their defence suitable to their conditions and as allowed by law.' Even colonial laws in America required all free adult males to possess arms and to be disciplined if they did not. If a colonist or early American were to travel or relocate in the west with his family, a gun was a necessity to survive and protect against not only the wildlife but the hostile Native Americans as well.

But there is even an older natural rights history to the right to bear arms. Cicero wrote, 'There exists a law, not written down... but inborn in our hearts... if our lives are endangered, any and every method of protecting ourselves is morally right.' In the state of nature, bearing arms frees people from living in fear and allows the other natural rights to exist. Should a government take away the people's other rights, the right to bears arms allows the people to fight their government, forcing their voices to be heard. In this way, Locke's belief in the people's right to abolish tyrannical government was not a speculative theory, but rather became the story of America, beginning with the 'shot heard round the world' at Lexington and Concord.

The Second Amendment also remains a focal point for Americans largely due to the strength of the pro-gun faction, the National Rifle Association. The NRA is a powerful interest group, financially contributing to candidates who share its beliefs. In addition, the NRA's vocal advocacy continues to grab the attention of voters across the nation. The disparity between the number of gun deaths in the United States compared to the major, industrialised nations of the world, as well as the use of guns for hunting, also contribute to this continuous controversy. For example, in 2001, the United Kingdom experienced 167 gun-related deaths, while the United States witnessed over 29,000 in that same year.

All United States Supreme Court case law to this date has inferred that the Second Amendment is a collective right, protecting a group of people. In the 1939 case of United States v Miller, the Court found Miller's personal shotgun had no 'reasonable relationship' to a well-regulated militia, and thus the right to keep and bear that arm was not protected. In the Miller case, the Court wrote that gun rights must be interpreted and applied with the state militias end in view, thus, a collective right which is consequently left for state regulation.

Other experts argue that the intent for the Second Amendment to be applied in the context of militias can be found in the syntax of the amendment. The commas within the amendment ('A well-regulated Militia, being necessary to the security of a free State, the right of the people to keep and bear Arms, shall not be infringed.') bring light to the independent clause, which carries the most weight, thus, reading: 'A well-regulated Militia... shall not be infringed.'

In his book which delves into the meaning of each of the first ten amendments (the Bill of Rights), Akhil Reed Amar argues that interpreting the Second Amendment as '... an individual right to hunt or to protect one's home is like viewing the heart of speech and assembly clauses as the right of the person to meet to play bridge or to have sex.' In other words, the right to bear arms as an individual right is not what the Second Amendment is all about. Since the Americans fought off the British for independence through the use of regional militias, they feared the power and consequences of a standing army, placing their trust instead in local militias.

It can also be argued that the right of the people to keep and bear arms is a check on Congress against the creation of a standing army. Even a state militia may not be free or separate enough from the government to preserve the 'security of a free State' against a hypothetical tyrannical government, a concern in the Anti-Federalist Papers (essays written against the adoption of the Constitution, during ratification of the Constitution - for those of you non-American types) and experienced in the Boston Massacre.

Opponents of gun control point out that just because some free speech may be offensive or hurtful to others, we should not take away the right to freedom of speech. In the same way, just because criminals use guns, this should not prevent law-abiding citizens from possessing and using firearms. Even in modern times, Cicero's words prove vital. In the 1996 federal circuit case of United States v Gomez, the court concluded that an individual's right to bear arms may take precedence over local laws when all other routes have been exhausted. As one of the Constitution's Framers, George Mason, put it, 'to disarm the people [would be] the best and most effectual way to enslave them'.

Against the backdrop of the intervening Columbine, Virginia Tech, Omaha, and now Colorado shootings, the Supreme Court agreed to hear the District of Columbia v Heller case in 2007. Heller's claim is that the District of Columbia's ban on handguns - even if a gun were to be stored in the home for self-protection - was unconstitutional. The Supreme Court's decision on this case is important, because its implications could mean that the Second Amendment does protect an individual against state and local government gun control laws.

The National Center for Injury Prevention and Control reported in 2003 that there are nearly 100,000 victims of gun violence each year. While the vast majority of these incidents are not any St Valentine's Day Massacre or a Columbine shooting, the use of guns poses a major threat to a citizen's right to life, liberty, and property. Firearms are made to quickly and effectively kill, depriving a person of their natural right to life. As British humourist Eddie Izzard quips, 'The National Rifle Association says, "Guns don't kill people; people kill people." But I think the gun helps...'

Laws must be in place to properly protect Americans' right to life liberty and property, although by doing so, some personal rights are exchanged to benefit the common good of the community and nation.

Just five days before his assassination, Robert Kennedy summarised the situation well, stating, 'With all the violence and murder and killings we've had in the United States, I think you will agree that we must keep firearms from people who have no business with guns.'