New York City Public Transit System Content from the guide to life, the universe and everything 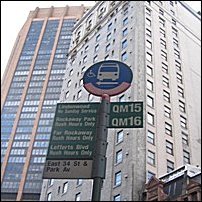 While looking rather easy to navigate at first, many tourists find a way to lose themselves very quickly and efficiently in the New York City (NYC) transit system. As it is, there are currently over 400 miles of track in the subway system, which makes the NYC subway the biggest in the world. The bus routes are increasingly arbitrary and have no real relevance to actual population flow.

The sheer size notwithstanding, there are only a few rules to remember if you are to successfully navigate the bus and train routes, lines, transfers, traffic, and delays with a minimum of physical injury and wasted time.

An Abridged History of the Subway

New York City's (and Manhattan's especially) road plan was designed for buildings no taller than three stories high, as the population increase caused by taller buildings would result in an extremely large traffic jam. Since then, that rule has been thrown out a fourth story window, and New York's roads have been permanently jammed until this day.

Around 1904, the companies in charge decided that above-ground lines were far too ugly to be profitable, and started building subways. In contrast to London's underground, New York's subways were created using a 'cut and cover' method, where in an effort to lessen traffic on the streets, the streets were simply removed. In addition, the system was originally built by individual companies who wanted to cherry-pick the busiest routes, so all subway lines but one lead either in or out of lower Manhattan. The G line is the only exception, and is today the slowest and most inefficient line in the city.

There were three companies; the IRT (Inter-boro Rapid Transit) which accounts for all the numbered trains, the IND (Independent) comprising lines A to G, and the BMT (Brooklyn Manhattan Transit) which covers lines J to Z.

One look at the current subway map reveals some skipped numbers and letters. You can easily see the 1 to 7 and 9 lines, but no 8. Lines A to G, J, L and so on exist, but there are no lines H, I, or K. These lines have long since been abandoned. The 8 line parallelled the D and the 5 in the Bronx. The H line followed the A line into Far Rockaway. The K line followed the B line until it reached the Williamsburg Bridge, where it then followed the J line. An I line was never used due to possible confusion with J.

The perfect example of this is 42nd Street Times Square. The transfer from the A train to the N train is through a hall that is three avenue-sized blocks long, down a flight of stairs, up an escalator, past the S train platform, and down another flight of stairs. To go from N line to line 7 means going down four ramps, down a flight of stairs, across a third of the length of the 1 train platform, and down another two flights of stairs, only to hear that service is halted due to construction on the tracks and that it was better to take the N line anyway1. The only people who successfully complete these journeys are experts who have done it several times before.

The G train is a perfect example of travel from a non-Manhattan borough to another. Most people trying to get from the Bronx to Queens to Brooklyn must go through lower Manhattan to finish their trip. The G train is slow, inefficient and, more often than not, skips transfer stops rather ambivalently. No bus line ever goes from borough to borough, unless Manhattan is one of them.

If the number or letter of a train is surrounded by a diamond, any tourists aboard will always get lost. Avoid these trains at all costs. They will switch lines, skip stations, and generally cause havoc for the non-subway savvy. Luckily, some of them, such as the 5 or C, can be avoided entirely.

There are two stations to avoid at all costs, unless masochism is your forte.

This is a weird one. The express and local trains are not within easy access of each other. To transfer from downtown to uptown, you merely have to cross the platform. However, most people will want to transfer from local to express or vice-versa, and this involves a mad dash down and up a flight of stairs. The other option is to transfer at 42nd Street Times Square, but that is the other station to avoid (see below).

In order to exit 34th Street Station, one must navigate the largest train station in New York City - Penn(sylvania) Station. That is an experience in itself. If you must exit at 34th Street, be sure to be in the rear of the train if you're going downtown or in front if you're going uptown, as these are the least painful exits.

This is the most expansive and pointless subway station in the system. It really should be three stations. The A, C, and E trains are on one end, and exit into the Port Authority Bus Terminal. This exit is not quite as difficult as Penn Station. The 1, 2, 3, 7, and 9 lines are in the middle of the station, separated from the IND lines by a three avenue-sized block length, and from the BMT lines by a veritable maze of escalators, ramps, staircases and angry commuters. The N, R, and S lines are off on the opposite corner, barred by constant and random closing and openings of entrances. Only use this appalling connection if you want to end up somewhere completely different from your intended destination.

There is a schedule for all train and bus lines, spacing them about 15 minutes apart, but it is common practice to ignore these as they are designed to deceive. The best description of the trains and buses' actual schedule would be that Murphy's Law applies. Here are some examples,

The PA system is widely known for its unintelligibility. After years of careful study, the noise coming out of the speakers has been shown to be related to events occurring in the subway. However, although the announcements often start out in English, they always trail off into some language known only to transit workers or those who work on the Beijing Mass Transit System. Most tourists and New Yorkers can definitely benefit from the following translations.

This is accepted and common as the conductor will always re-open the doors. The only problem with doing such a thing is that the longer you hold them open, the more likely your destination stop will get skipped, and the more likely your person will come to physical harm.

You may not make eye contact or even look at anybody throughout the entire trip. This becomes rather difficult during rush hour when you get squashed for upwards of an hour in an immobile train. Sometimes you must stare at the same advertisement or a spot on the ceiling until you blank out. No other solution that is beneficial to your health has been found.

Sometimes, a homeless person will come aboard and threaten to complain about life, the universe, and everything until you pay him to stop. This is a minor problem, because he usually has to yell above all the local New Yorkers who are also complaining about life, the universe, and everything. If he does manage to get through, a Walkman comes in handy.

Walkmen are very useful in your travels. You can drown out the neighbouring commuters and homeless beggars, and get extra leg room in the meantime. The only thing that can counter the Walkman is another Walkman. By definition, Walkmen counter each other out. If you need to get by a person with a Walkman, you are out of luck. Possible physical injury can result from the overuse of your Walkman. If you were to play it loudly for long enough, even the kindest of old ladies will have some choice words for you.

In the 1976 NYC Subway guidebook, CEO of the MTA (Metropolitan Transit Authority) David L Yunich made some profound statements on the subject of subway etiquette.

Never talk politics in the cars. It is usually disagreeable to some of your fellow travellers.

Never talk loudly while the train is in motion; it may not annoy anyone, but it will injure your lungs.

These are probably sound pieces of advice.

The bus is the only way to get around once you leave Manhattan. There is only one useful train line in Queens (7), and therefore the last station in Flushing has over 20 bus lines connected. There is no way to buy a MetroCard once you leave a populated area, and although the buses accept change, this leads to our first rule:

Not having the exact fare is like giving a $20 note to a toll booth attendant. It's suicidal. You hold up the bus, annoy the riders and the driver, and there is no conceivable way of begging the driver to give you a free fare.

Never take a bus one stop, unless that is, you want to hear a diverse mix of American insults. NYC is one of two walkable cities in America2, and people don't like it if the bus has to make a special stop for you.

It is inevitable that if the temperature gets over 80°F or 23°C, the air-conditioning will fail. In the bus (and the subway too), you are expected to mutter unintelligibly under your breath and go on. The problem is that when the air-conditioning fails, so does the bus. The only solution to this is walk. You can reach four miles in the outer boroughs and seven in Manhattan on foot before the next bus comes along. Many people don't realise that you can outrun a bus in Manhattan by walking at a leisurely pace.

The one main golden rule to not getting in trouble is if it's rational, it's too good to be true. You wouldn't think that the local line is faster than the express, but more often than not, it is. You wouldn't think that in a station that caters for 12 train lines, that the announcement is directed solely at your train, and will affect you detrimentally, but it is and it does.

1If this happens to you, then the N line can also be taken to Queens for transfer at Queensboro Plaza.2The other is San Francisco.