Traditional Pumpernickel Content from the guide to life, the universe and everything 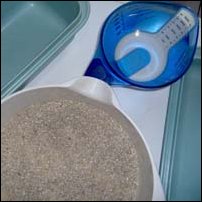 I've only had pumpernickel once - at the time I described it as corkboard soaked in treacle1. But that was half a lifetime ago. I might like it now2.
- an h2g2 Researcher

Pumpernickel is a special dark German bread made of coarsely ground rye and water. Unlike with other rye bread, no sourdough is added. To give you an idea of the procedure, here is roughly how it is done the traditional way: part of the dough is mixed with hot water and left to ferment for about 12 hours. This mixture is called the Brühstück (literally: a piece of broth). The rest of the flour is added, the whole mixture is kneaded and put into a lidded tin which is then put into the oven on a low heat (120°C/250°F) where it stays for another 12 to 16 hours. The oven has to contain steam at all times: so you could say that the bread is 'steamed', rather than baked.

Our ancestors needed to have quite some skills and experience for the successful production of pumpernickel (or any other bread for that matter). Without a thermometer it wasn't easy to decide whether the oven had the correct heat or not. One test was to take a pinch of flour and throw it into the oven. If the flour turned black, the oven was too hot; if it remained white, the oven was too cold; if it turned brown, the oven had the right temperature.

It's probably not surprising that the size of the oven determined the number of loaves which could be baked in one batch. A smaller oven allowed for fewer, smaller loaves than a large oven. However, the small loaves didn't need so many hours to bake; they would be ready after about seven hours.

Why is it so Black?

Once the dough is in the oven and subjected to the heat, something called the 'Maillard reaction' takes place. In short: the starch of the rye is transformed into sugar which reacts with the proteins. The sugar caramelises and gives the bread its dark-brown-to-nearly-black colour as well as its specific flavour. Another effect of this special steaming procedure is that pumpernickel is pasteurised, which explains why it can be conserved for so long: sealed appropriately it can be kept for several months (some even claim up to two years if kept in cans). The texture is crumbly and the bread doesn't have a crust.

Nowadays, as 'Time is Money', the process is often shortened by adding sourdough to the flour as a starter, and molasses for the colour. For instance, North American pumpernickel has little resemblance to its German 'brother'. Traditional pumpernickel, however, does not contain anything but rye and water.

Pumpernickel originated in Westphalia, Germany, but that's about the only thing we know for certain. The Westphalians themselves referred to it as grobes Brot (coarse bread) or schwarzes Brot (black bread), and it was only outside Westphalia that it was called pumpernickel.

The bread possibly dates back to the 15th Century but it wasn't until after the Thirty Years' War (1618 - 1648) that it was called pumpernickel, when HJ Christoffel von Grimmelshausen mentioned it in his book Der abenteuerliche Simplicissimus Teutsch (The adventurous Simplicissimus German) in 1668.

What is the meaning of the name?

There is no certain explanation, but various attempts at an etymology have been made: some of them amusing, some likely. Here are some possible explanations:

Although all these meanings seem to imply that the name 'Pumpernickel' was a pejorative for the bread4, you will nowadays find a huge variety of recipes using pumpernickel. Pumpernickel slices are always thin. They are an ideal base for canapées among others.

However, you can always just have it instead of other bread, and it is possibly still the bread of choice for a German to take on a holiday abroad to prevent constipation.

1Treacle is known in America as molasses.2It turned out that the Researcher still doesn't like it.3This is good (bon)/bread (pain) for Nickel/Nicole.4The Dutch humanist Justus Lipsius (16th Century) is said to have exclaimed: 'What a poor people who have to eat their soil'.