The Cinque Ports Content from the guide to life, the universe and everything 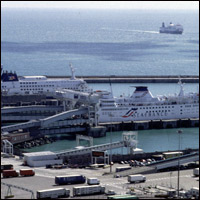 The Cinque Ports1 are a confederation of towns on the south coast of England which dates back to the early Middle Ages. The five original ports were Dover, Hastings, Romney, Hythe, and Sandwich, though the Confederation of the Cinque Ports now also includes Rye, Winchelsea, Deal, Ramsgate, Faversham, Margate, Folkestone, Tenterden and Lydd.

The south coast was particularly vital for the defence of England and the British Isles as a whole. France, just over the water, was at war with England for much of the medieval period and the south-east portion of the English coast, where the Cinque Ports are located, was the logical place for an invasion to land, or for the English to send off an army of their own. The idea was not new. The Romans had a military officer in charge of the coast to defend against Saxon attacks, and the basis of their system appears to have been continued into later centuries.

England had no regular navy in the Middle Ages. During wartime, the barons of the ports provided ships and sailors instead of soldiers, which inland lords were required to recruit. For example, Henry III called for 57 fighting ships with 1,197 sailors to serve 15 days per year. If the period they were needed for overran 15 days, the king paid their expenses. This must have happened on most occasions, as two weeks was not enough time to conduct most naval military exercises. The ships served as transports for goods and soldiers as well as fighting enemy vessels. The kings got ships from other places too, but for many years the vessels of the Cinque Ports may have been an important part of English naval forces.

The precise origins of the arrangement are not entirely clear, but a charter of Edward I says the originals were a federation as long ago as the reign of Edward the Confessor (1042 - 1066).

The five original ports were known as the 'head' ports, while more than 30 other ports were called 'limbs', each associated with a particular head port. The limb ports were needed as the numbers of ships and sailors required was too many for the main ports to provide themselves. The more important of the limb ports were eventually granted their own charters and were then known as Corporate Members. By the 14th Century, Winchelsea and Rye, originally limbs of Hastings, were added to the Confederation as full members. They were known as 'Antient Towns' [sic]. All of the head and limb towns are in Kent or Sussex, with the exception of Brightlingsea in Essex.

Due to their locations, the Ports were important politically. For example, in 1264, ships from the Cinque Ports were the main part of a fleet intended to prevent Henry III receiving help from Europe. When the barons revolted against King John, the Ports took the barons' side and were involved in ensuring the availability of communication routes to the Continent.

The Ports were involved in a number of military actions, of which perhaps the most successful and notable was their attack on Boulogne in 1340 which destroyed 18 French ships. However, for the most part their military role was not superior to that of any other ports of comparable size, although they were useful for their expertise. In 1225 they were asked to advise on the best way to resist an expected French invasion.

Some of the sailors resorted to piracy in peacetime, so in 1278 Edward I agreed that they would continue their naval warfare role when they were needed, and to keep them in line awarded the towns a number of privileges. These included tax exemptions – very useful to the traders of the Ports - and the right to keep any goods they salvaged from the sea. In Tudor times an official navy was created so this role reduced, though Dover did provide a ship to fight the Spanish Armada.

By the 14th Century, the Ports were in decline. They were no longer singled out to give advice. By the middle of the century, the Ports provided only five percent of shipping requisitioned during wartime. They also began to silt up, which reduced their capacity and the size of the ships they could hold, and consequently, their importance. Of the seven head ports, all but Dover are now silted up. In addition, the coastline has changed somewhat over time. Sandwich, for instance, is now two miles from the coast.

The chief post of the administration of the Cinque Ports was that of Lord Warden, which was established in the 13th Century. The Lord Warden was in charge of the defence of the coast, which was important up until Word War II - Winston Churchill was appointed Lord Warden by George VI in 1941.

In the later 13th Century it was realised that it made more sense to combine some of the various positions with responsibility for the south coast defences by always giving them to one person rather than several. The post of Lord Warden was accordingly combined with that of Constable of Dover Castle from the wardenship of Stephen de Pencestre (1265 - 92). The Lord Warden was also Admiral of the Cinque Ports which gave him maritime jurisdiction. The Lord Warden was appointed by the crown to keep control of the men of the Ports and their operations, but was also responsible, once installed, for protecting the interests of those men.

Today the Lord Warden is an honorary position, but it is still an honour to be appointed. The post is awarded for distinguished service to the nation. It has always been in the royal gift, but now the candidate is suggested by the government and approved by the monarch. The Queen Mother held it from 1978 until she died in 2002, the first woman to hold the position. Other holders have included William Pitt and the Duke of Wellington.

The post also has an official residence, Walmer Castle, between Dover and Sandwich.

Meetings of the Confederation are presided over by a Speaker, who is the mayor of one of the seven head ports. The position lasts for a year and rotates between the seven, with each new speaker taking office on 21 May. The only other person in the United Kingdom who holds an office of speaker is the Speaker of the House of Commons.

The barons of the Cinque Ports have places reserved for them in Westminster Abbey during the coronation services of British monarchs. Each new Lord Warden is also installed with great pageantry at Dover.

1The name comes from the French word for 'five' as there were originally five of these ports. For reasons that are not clear but probably relate to the British dislike of learning other languages, in English it is pronounced 'sink' ports.