Electrical gadgetry to take on a winter sports holiday Content from the guide to life, the universe and everything 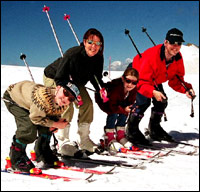 As any engineer or small boy will tell you, there are few activities so pure and unsullied that the enjoyment of them cannot be enhanced with the use of some pocket-sized battery powered gadgetry1. Winter sports (skiing, snowboarding etc.) are no exception. This entry suggests a few gadgets you might like to take with you onto the slopes to enhance the joy of sliding down them.

These items are suggested for use by dilettante snow sliders who mostly stick to marked runs and venture off-piste relatively rarely and then only in sight of the trails or in the company of a guide. It therefore does not cover the single most important item of equipment for back country riding, the avalanche transceiver. The very serious business of why you should wear one of these and how to use it is something one should be learning in person from an expert, not a flippant entry on an informational website.

A few words first on batteries. Charge them, and carry spares. There are few things more pointless than a fancy electronic widget with a dead battery in it.

A bit of a no-brainer, this one. Make sure before you go that your phone will work in your destination country. You will usually get a very good signal on the slopes, and a mobile phone could literally save your life, or someone else's. Don't get into the habit of using it a lot, however, unless you have money to burn2. For communication with others on the mountain, there's now a much better option.

Due to a relatively recent change in the wireless regulations, a previously restricted sector of bandwidth has been opened up for public use. The practical upshot of this is that you can now buy cheap two-way radios that have a usable range of about two miles. These gadgets are easy to operate, run all day on a set of batteries or a single charge, and require no license.

It is difficult to overstate how useful two-way radios can be, especially in mixed-ability groups. There is simply no longer any need to wonder which lift or restaurant the people who went on ahead ended up stopping at - just ask. There's no need to sit at the top of a black run wondering which side is iciest - radio down to your mate at the bottom who's just done it and now has a much better view than you. And if you've just sunk hip-deep in fresh powder3 and are going to have to spend the next half-hour digging yourself out and walking back to the piste, you can at least let the rest of your party know you're OK so that they can have a mulled wine waiting for you when you eventually emerge.

Make sure, before you go out, that you do a radio check to ensure everyone in your group is on the same frequency. Just press the button and say 'radio check', from each handset in turn. The most battery efficient way to use radios is only to switch them on if there's someone you can't see.

These radios can be tuned to operate on eight separate frequencies, and many have sub-frequencies. This reduces the likelihood of someone else using your waveband, although it does not eliminate it. If someone does start using your frequency, it's usually simplest just to change to another at the earliest opportunity. Pretending to be someone else in their party is neither big, nor clever.

Again, a bit obvious. A few points are worth mentioning, though.

First, and most important, get one with a proper optical zoom lens. This cannot be stressed enough, unless you just want to take panoramic shots or close up portraits.

Another point to consider is something called 'shutter lag'. On old fashioned cameras, you pressed the button and you got a picture of what was in front of the lens then. With digital cameras, you press the button and the gadgetry inside has a little think, and some time up to a second after that it finally deigns to bother to record an image. Needless to say if you're shooting something fast moving, this can be disastrously too late. Test your camera in the shop by getting your friend, or even better the sales person, to jump in the air, and try to get a picture of them in the air. If you can't get a picture of them in the air, don't buy the camera.

It's also worth remembering that some digital cameras will shoot rapid sequences of stills, which can be very useful for capturing jumps and other recklessness. Many will also shoot video clips, which is by far the best way of recording dynamic winter sports action. Take it easy though, and don't bother recording clips much longer than about 30 seconds. File sizes become unwieldy, and you're likely to run out of space on your camera's memory media.

More so than almost any other gadget here, cameras are power hungry, so make sure you take batteries out with you. You might also like to consider spare media. An extra card is cheap compared to the cost of your holiday, remember.

Forget your snazzy, expensive, show-off 40Gb hard disk jukebox players4. A long day on the slopes begins around nine and finishes around four, with some time for lunch, so realistically even if you're a completely antisocial type who rides alone5 you only need about six hours of music even for a whole day. So with a modicum of foresight, a simple, relatively cheap 512Mb solid-state player should be plenty, especially if you've got a laptop back at base so you can change the tracklist each day.

It's amazing the difference a soundtrack can make to the way you slide down a hill. Take a reasonably competent, normally fairly cautious snowboarder, fill his ears with a bit of German grindcore - 'Wollt ihr das Bett in Flammen sehen'6, by Rammstein, say - and suddenly he becomes completely fearless. This of course may be a two-edged sword, since he also becomes completely deaf, and unable to hear things like some dizzy tart on skis behind him plummily going 'I say' immediately before she careers into him from behind, flattening both of them7.

Seriously, while a thumping soundtrack can make a difference to how you ride, this should only be attempted on wide open, quiet pistes. Riding like a loony through a packed half-term resort-centre run is the sort of thing that gives snowboarders and a certain type of skier a bad name, and should be avoided.

Even more seriously, you should never do this while riding off-piste, even a little bit. One of the great beauties of powder riding is the awesome near-silence in which you travel, in sharp contrast to the noise on the groomed runs. The subtleties of the sounds you do make are a crucial indicator of the state of the snowpack, and should not be interfered with. If you're aiming to ride powder, an MP3 player can still be a boon, in that it can make a long hike pass more easily - but put it away before you strap in for the first drop.

Don't just take fast, ride-like-a-bastard music, either. Long, sunny but otherwise tedious chairlift rides can be transformed into spiritual experiences with the simple addition of a bit of Pink Floyd or other ambient music of choice8.

It is now possible to buy, for less than £100, a gadget the size and shape of a mobile phone which can tell you where you are on the earth's surface and how fast you're travelling with amazing accuracy. These gadgets use the Global Positioning System satellites to work out position and velocity.

A number of uses suggest themselves. How far (in a straight line) is the chalet you're staying in from your home? From where you are right now, up in the restaurant? How far have you travelled today, counting chairlifts etc.? What has been your average speed? What has been your maximum speed? Surely everyone wants to know this? And in most cases it's almost impossible to measure, as even resorts with speed-trap arrangements usually measure speed over a distance of 100m or more, whereas if you touch 60mph and then suddenly bottle out, the GPSr will record 60mph.

GPS systems can, of course, also be useful for navigation9, but they are suggested here for use only as a toy. You should never rely solely on a GPS for anything important. If you need to be navigating round a mountain, you need a map, a compass, and proper training in their use. A GPS can be a useful backup for these essentials, but can never replace them. The batteries never run out on a map, and compasses get a much more reliable signal10.

One or two of the more up to date mountain restaurants are now offering wi-fi access to anyone with the requisite toys. There can be few more powerful11 demonstrations of extreme geekdom than sitting down to a vin chaud on the terrace, whipping out a PDA, and posting an entry to h2g2 on the uses of modern technology in the enhancement of holiday enjoyment.

It also allows you to check the latest snow reports from other resorts, avalanche risks at your own, and a whole load of other pointless rubbish you could perfectly easily do simply by looking in a newspaper.

But that's hardly the point, is it?

1Stop that tittering at the back!2Not everyone who goes on winter sports holidays has a chalet of their own and a double-barreled name...3You lucky b*****d.4You know who you are.5This is of course stupidly dangerous and not recommended.6Translation: 'Do you want to see the bed in flames'.7A completely hypothetical example which most definitely never occurred. Especially not on 15th January, 2005 at about 12:05 local time on the run into La Tania, near Courchevel.8The author recommends 'Shine On You Crazy Diamond' Parts 1-5 from the album 'Wish You Were Here'.9Duh.10That said, it is the author's experience that while a GPSr at sea-level in the UK can usually 'see' three or four satellites, a mile up in the Alps it is not unusual to be able to get a signal from ten or twelve.11Or possibly sad.