Cwm Rhondda: The unofficial Welsh National Anthem Content from the guide to life, the universe and everything 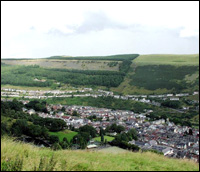 It is arguably one of Britain's best-known tunes, having been chanted by football fans over the country, berating the referee as he makes another dodgy offside ruling. That celebrated curmudgeon Victor Meldrew was subjected to a tirade by garage staff sung to its melody: they had spitefully recorded over a cassette tape left in his car. Virtually everybody who is British knows this tune yet very few could name it and even fewer sing it properly. This is an attempt to put this state of affairs right.

'Cwm Rhondda' is a belter of a hymn that defies one to sing it quietly (you can listen to it at the Cyberhymnal site). It is the very embodiment of hwyl, the Welsh love of homeland and of culture, and as such has come close to supplanting the official Welsh national anthem. This is especially the case at rugby 'internationals', where the faltering, bathetic, falsely-devout Land of My Fathers is soon dispensed with in favour of something far more robust. England fans often respond with their own countermeasures, often the Negro spiritual Swing Low, Sweet Chariot, but soon buckle under the sonic onslaught of 'huge gangs of tough, sinewy men…terrorising people with their close-harmony singing'1

The religious overtones to this performance are more an affectation than anything else. If the rugby fans had ever gone to chapel then they might actually have learned to sing the whole hymn, not just the chorus. The Welsh comic song-writer Max Boyce wrote an unusually incisive song – Ten Thousand Instant Christians - about it being one of the 'hymns of yesterday, only half remembered' and about the cod spirituality of rugby fans. In mitigation, they can claim that there are so many versions of the lyrics that they might as well make up their own.

The history of 'Cwm Rhondda' goes some way to explaining this confusion. For those who find it difficult enough to understand the huge number of variations of the Christian faith, Welsh non-conformism must seem like a microcosm of this bewildering variety of sects and movements. Originally a branch of Methodism, the movement fragmented down to almost atomic levels. A religious map of Wales would have looked like something dragged from the wreckage after an explosion in a paint factory, dominated by countless shades of Orange. During the 18th and 19th Centuries, a community would have several chapels, each vying for prominence and larger congregations2. Just about the only thing uniting them was a distaste for the trappings of 'high church', with the result that chapels often tended to be drab and utilitarian.

The music had to go some way to making up for this austere approach to faith. Welsh hymn tunes were simple, rousing melodies which could be easily grasped by congregations who often were hearing them for the first time. Also, the tunes were often named after the places where they were written, so that peripatetic organists could instantly recognise the tune and let the chapel sing whatever lyrics they wanted. 'Cwm Rhondda' simply means 'the Rhondda Valley.' However, despite its Welsh name, the hymn is actually written, and properly performed, in English. 'Cwm Rhondda' was written by John Hughes, the organist of Capel Rhondda in Hopkinstown, near Pontypridd. Hughes had been asked to write a tune for the inauguration of the chapel and its organ in the early 1900s. He took an earlier set of words written by William Williams (Arglwydd, Arwain Trwy'r Anialwch), who published them in 1745, and arranged a tune to them. Unusually, there had been a large influx of English-speakers into that area as the railway was being built and the chapel was originally intended to serve as a place of worship for them. Hughes used an English translation, 'Guide Me, O Thou Great Jehovah,' for its first performance in 19073, with Hughes himself at Capel Rhondda's mighty organ and it rapidly gained in popularity.

Now the tune is well-known the world over, although the lyrics seem to be infinitely mutable. For instance, American congregations may know it as 'Christ is Coming' or 'God of Grace and God of Glory.' This is for two reasons. Firstly, unlike the unofficial English national anthem, Jerusalem , the original words themselves are unexceptional; even the lyricist's own mother would have been hard-pressed to rank him as a poet on a par with William Blake. Secondly, the simple scansion allows all sorts of rhymes, no matter how clunky, to be shrink-wrapped around the melody. But it's the melody that makes the hymn; the chapel even contains furniture donated by converts from Hinduism who were moved by the power of Hughes's music.

As for the chapel itself, it has proved to be less durable. Dwindling congregations throughout the Principality have meant that Capel Rhondda is going the same way as many of the other chapels. In particular, its façade is crumbling and it requires a large amount of funding before even the first phase of the work can be completed. It would be a terrible shame if this chapel, like the other two members of the 'holy trinity' of the typical Valleys community - the coalmine and the rugby field - followed the others into the state of desuetude and neglect that has come to characterise the area in general. But whatever becomes of it, its most famous cultural product will certainly live on, whatever words end up being sung.

1A quote from BBC's 'Blackadder the Third'.2This religious Balkanisation is epitomised by the joke about a Welshman who gets shipwrecked on a desert island for ten years. When he is eventually rescued, his saviours find that he has built a coalmine, a pub, a rugby field and two chapels. They ask him why two chapels, so he points to one and says: 'that's the one I don'tgo to'.3Some maintain that it was actually first performed in 1904.