Ideas for Small Herb Gardens Content from the guide to life, the universe and everything 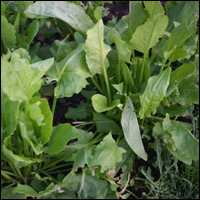 By the term 'herbs' we generally mean the culinary herbs which have been valued by mankind since prehistoric times for their fragrances and the flavours of their leaves, shoots and seeds.

Herbs can be selected such that they can be grown in virtually any conceivable space: not just in gardens large or small, but in window boxes, or in pots on a window sill. Some herbs can even be grown as houseplants.

For those who don't have a garden or patio area, but would like a supply of herbs just for cooking, then perhaps the easiest thing to do is to purchase small pots of individual herbs from the supermarket and keep them on a window sill in a cool room; perhaps in an attractive 'planter'. Such plants generally come with some instructions for maintenance. However, in many people's experience these have a short lifetime1, often as short as a week. In order to improve their longevity it is necessary to water them very sparingly, taking care to apply the water to the base of the plant. If the leaves are allowed to get wet, they will become mouldy and rot. The plants should only be watered when they noticeably droop, or when the surface of the soil has dried out. After a few weeks you could try repotting them into a peat-based seed compost, as they tend to get 'root-bound' in their small plastic tubs.

Mint plants can be stood in their pots in a saucer of water during the summer months. During the winter, remove the water and keep the plants rather dry. The plants should be cut regularly.

Chives will also grow happily on sunny windowsills provided the compost is kept moist and the grassy leaves cut regularly, perhaps for use on cheese and biscuits, or in omelets. The plants should not be allowed to flower.

Once you have developed some expertise, you can become more adventurous and try planting lettuce seeds in, say, yoghurt pots on the window sill. Once they have germinated, the seedlings can be transferred to a wide, shallow plastic container.

Space permitting, you could also try growing a miniature tomato - such as 'Tiny Tim' - in a 6 inch pot.

As herb collections tend to get neglected during inclement weather, it is a good idea to site your herb garden as close as is practical to the house. Whenever possible, herb species should be grown in separate pockets, traditionally done by dividing the herb bed into separate compartments called 'knots' with a dwarf hedge of lavender or box.

When planning a herb garden, whether large or small, you should allocate around one square foot for each plant so that, in high summer, barely an inch of bare ground can be seen between them. Some herbs, such as sweet basil, will not need all their allocated space but others such as chives and lemon balm will. The mints, also, are very rapacious and will eventually take over the whole garden if allowed. These, therefore, should be grown in individual large flower pots, sunk to their rims in the soil. Other containers may also be used, so long as small drainage holes are provided.

Large strawberry pots make very good containers if space is at a premium or if you require low maintenance gardening.

Many herbs are of Mediterranean origin and therefore need a well-drained soil and plenty of sun to bring out their full flavours and aromas. The mints, however, will grow in a fairly heavy soil.

Kathleen Brown, a former city banker who retired to the country to raise her children and write gardening books, says that one secret is to cram as many plants as possible into any shape or size of pot.

For Easter2 she recommends filling a small window box with late spring flowers such as cowslips and edible herbs. One suggestion is to take one each of golden marjoram, Oreganum vulgare 'Aureum', and variegated pineapple mint, Mentha suaveolens 'Variegata'; three pots or half a strip of pink daisies, Bellis perennis 'Dresden China'; and two cowslips, Primula veris.

To plant, put some broken crocks (broken pieces of flowerpot and so forth) into the bottom of the container for drainage and cover with John Innes No. 2 soil3. Plant marjoram at one end and mint at the other, both at the front edge of the window box. Plant the daisies behind the herbs and one in the centre of the box. Plant the cowslips either side of the central daisy.

Obviously, when designing a herb garden you should plan on incorporating herbs that reflect your own interests, whether these are culinary, medicinal/homeopathic or just for their fragrances.

The following list gives the main characteristics of some popular and easy-to-maintain herbs.

Don't plant fennel next to dill as they will cross-pollinate, and you will end up with 'fendill', losing both flavours in the process.

Likewise, do not plant dill or coriander close to wormwood as the flavours are ruined.

Mint species should be kept apart as they also have a habit of cross-pollinating and so, over time, lose their individual flavours.

Herbs, once cut, can be preserved by either drying or freezing.

1This is because they are 'hothoused' before sale, and the upper growth is more than the root-ball can sustain for any length of time. Really, they are grown for the leaves to be used in the kitchen and the plant to be then disposed of. It is best to buy rooted herbs from a reputable garden centre, where the natural balance of leaves/roots is maintained.2Seasonal Container Gardening. Kathleen Brown.(Michael Joseph Ltd, 1995).3John Innes composts were developed at the John Innes Foundation between 1934 and 1939. A set of simple formulae, based on loam, peat, coarse sand and fertiliser, were developed for sowing seeds, rooting cuttings and 'potting on'. John Innes No.2 is a 'potting on' compost.4Eric Partidge in 'A Short Etymological Dictionary of Modern English (1966) cites 'parsley' as a slang term for pubic hair, and thus to 'take a turn around the parsley patch' is used as a euphemism for sexual intercourse.