Swizzle Sticks Content from the guide to life, the universe and everything 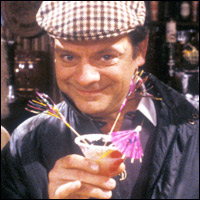 On 16 January, 1920, the Eighteenth Amendment went into effect, passed by the United States Congress. The amendment effectively banned the manufacture, sale or consumption of alcoholic beverages and marked the beginning of Prohibition in the US.

Over the course of the following 13 years the bootlegging industry was born, the crime rate rose1, the homicide rate nearly doubled, and Al Capone became a household name. The federal government finally came to its senses and repealed Prohibition with the Twenty-first Amendment, ratified on 5 December, 1933. This amendment left it up to each state to allow or prohibit alcohol commerce and many states lifted restrictions.

A few months later at the bar of the Boston Ritz Carlton Hotel, Jay (Jack) Sindler was casually enjoying his perfectly legal martini when he attempted to retrieve the olive from the bottom of his glass with his fingers. It was then it occurred to him that a barbed stick would serve nicely, and he spent the next several months inventing just that.

Before the end of 1934, Sindler had a patent for his Swizzle Stick, and began advertising it in New Yorker magazine.

A swizzle stick is usually between four and eight inches long, and is made of plastic, acrylic or glass, perhaps even pewter, stainless steel or silver. Sometimes they have a pointed or barbed end which can be useful for retrieving olives from the bottoms of martinis, or for spearing a fruit salad in a glass of sangria. Alternatively they may have a paddle, spoon or ball on the end, just for stirring - or swizzling - your mixed beverage.

Usually you will find swizzle sticks at pubs or clubs, sometimes at restaurants, usually in drinks that are made in the glass2. The sticks may be plain or they may have the name of the establishment on the stem; some will have the logo or some other kind of finial on the non-stirring end.

Swizzle sticks can also be purchased in sets for use at home. These are the ones generally made of the more durable materials. Plastic swizzle sticks can be purchased in bulk, in packages of 12, 25, 100 or more, which are perfect for parties where people can identify their drinks by different coloured sticks. Novelty swizzle sticks have featured thermometers (for making sure your iced drink is at just the right temperature); some come in silicone ice trays for making 'ice kebabs'.

With his invention Mr Sindler started his own business, Spir-it, Inc, which is now Spirit Foodservice Products, Inc. Over the years they have designed hundreds of sticks for different purposes. In 1950 they introduced the steak marker3. They designed swizzle sticks and other plastic ware for McDonald's in the 1960s and in the 1970s introduced the popular sword and arrow sticks that children stage fights with in fits of boredom at the dinner table.

1Although one of the initial goals of Prohibition was to reduce the crime rate.2As opposed to drinks that are mixed then poured in a glass.3The plastic pick stuck in your steak that tells whether it's medium-rare or well-done.