A Guided Tour Through 'The New Yorker' Content from the guide to life, the universe and everything 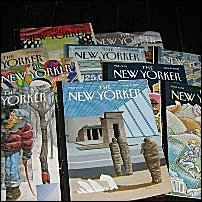 Thank you all for joining us today! As you may or may not know, The New Yorker is a literary magazine originally envisioned to cater to the intellectual New Yorker. Though it has changed much over the years and its focus has shifted from humour to journalism, it remains a witty and sophisticated magazine that informs, intrigues and entertains. Step right this way, ladies and gentlemen, and we will begin our exploration.

Our tour through the magazine will begin at its cover. Every cover is a work of art, literally. Aside from the magazine's name at the top, the cover is completely given over to a painting, drawing or similar. These works often involve ironic commentary on life: for example, the 23 January, 2006 cover featured a huge cat on a pillow and covered by a sheet while small humans tumbled about the creases. It was called 'Sleeping With Your Cat'. The New Yorker never mars its cover with blurbs about what is inside. News-stand editions will contain a half-overleaf with the screaming headlines instead. Otherwise, the reader must open the magazine to discover its contents.

Every year, for the second week in February, The New Yorker runs its anniversary cover, a painting of a 19th-Century dandy examining a butterfly through a monocle. The dandy's name is Eustace Tilly, and you will hear of him again. Every once in a while the magazine will run a parody of this cover, in which specific appropriate persons replace Eustace Tilly and the butterfly.

Now turn the cover and continue past some full-page advertisements, and we come to the table of contents. There is Mr Tilly again, presiding above the logo. Look carefully at this page and you will notice something worth noting: everything in the magazine falls under a header. No article can run unless it runs under a header. Headers are created only for a series of articles on the same topic. Early in the magazine's history this sometimes posed a problem: what to do about a one-time article that didn't fit under anything? However, by now the magazine has created enough headers with vague enough titles that they can fit pretty much anything into the magazine. If you read some of the section titles you will understand: 'Reflections', 'Shouts and Murmurs', 'Onward and Upward with the Arts', 'Letters from [location]'.

The last heading listed in the top grouping will be 'Fiction'. In the early days of the magazine, there were usually three fiction items per issue and they were evenly distributed throughout the magazine, but as stories gave way to facts in terms of social prestige, the magazine likewise replaced some fiction with non-fiction and moved the stories to the back.

The second block in the table of contents is for criticism. Your typical New Yorker is naturally quite interested in following innovation and evolution in culture, and The New Yorker provides it in reviews of books, dance, music, theatre, cinema and even television.

The last block is for poetry; the magazine will contain at least two poems.

You will note the distinctive typeface and elegant layout of the magazine. These were designed by the magazine's first art editor, Rea Irvin, and they have remained classic to this day, though they were modified slightly under Tina Brown's editorship.

Please turn the page and skip 'Contributors', which is introducing (or bragging about) the people who have written what will follow. It is relatively new. The next section is 'The Mail', which is the letters to the editor, of course. It is also a fairly new section and is very selective in what it prints — though 'letter wars' between celebrities have been known to receive special attention. Turn again and you will reach the first major section of the magazine: 'Goings on about Town'. This is a listing of all entertainment occurring in New York City in the coming two weeks, including Broadway productions, theatre, cinema, ballets, operas, nightlife and orchestra performances. This section helps the cultured New Yorker plan his or her week, though it may be irrelevant to readers located elsewhere who aren't quite as interested in the city's happenings. It is interspersed with a sidebar called 'Critic's Notebook', which is exactly what it sounds like.

Talk of the Town

Have you flipped through all the pages of things happening in New York City? Then we've reached 'The Talk of the Town'. A masthead containing our man Eustace Tilly again tops it. 'Talk of the Town' is the heart and soul of the magazine. It begins with a subsection called 'Notes and Comments'. Comments began as satirical editorial on New York City, but never tackled any serious political issues. Through the years, as the funny magazine became less funny, Comments has become more serious, and today it provides downright grave editorial analysis of politics by a prestigious pundit. (In the past, Notes was anonymous, and written by an editorial 'we'.) Following Notes and Comments you will find the rest of 'Talk of the Town': humorous vignettes of events in the city — and these days, out of it as well. 'Talk' also used to be a purely anonymous business, but these days the tireless reporters are allowed a byline at the end of their 'Talk' piece.

'Talk' articles have small titles, and some, you will note, are departments: The Hospitality Department, The Gold Star Department, etc. Back in the magazine's youth, it employed an item known as the newsbreak to fill out columns when the article simply wouldn't stretch. Newsbreaks were news items from other newspapers that were funny because of typos or poor writing. To emphasise the error, the newsbreak editor would file them under 'departments', such as the 'Neatest Trick of the Week' department, or the 'How's That Again?' department. The New Yorker's one-and-only newsbreak editor quit in 1982; since then column fillers have been made irrelevant by computerised layout. The departments, too good to drop, migrated to the 'Talk' section.

When you've finished smiling through 'Talk of the Town' — for The New Yorker is too sophisticated to print anything that will elicit belly laughs or guffaws — turn the page to the financial section. You may rest assured this is another fairly recent section, and it is therefore apportioned only a single side. A magazine such as The New Yorker must have an opinion on the state of the economy, but to treat it at length would be vulgar.

Beginning here, each issue will differ, depending on which sections are running. Read and enjoy — some will be humorous and some will be informative, though all will be well-written and worth reading1. While you peruse the pages, note three things:

The tail end of the magazine is for criticism, and afterwards there may be a final goodbye, in the form of a full-page cartoon or a cartoon caption contest or something of the sort.

Since the magazine began in 1925, it has been setting trends. It pioneered the use of single-line captions in cartoons. Before then, and even in the earliest days of The New Yorker, a caption could consist of a two- or even three-line exchange. It perfected the plotless story, also known as a New Yorker story, which instead focuses on the development of a person or situation. It also blazed a trail in journalism, providing fair and rigorously accurate reporting on important events around the world. It perfected the 'literary journalism' style, informing while entertaining, captivating while educating. It has upheld these traditions and standards, and is considered the foremost journalistic publication in America.

Due to its leadership in these areas, The New Yorker has printed first within its pages many stores and articles that were later anthologised, republished or became otherwise well-known. Shirley Jackson's 'The Lottery', James Thurber's 'The Secret Life of Walter Mitty', John Hersey's 'Hiroshima', Truman Capote's 'In Cold Blood' and Rachel Carson's 'Silent Spring' are barely a sampling of the works that appeared first beneath Eustace Tilly's monocled scrutiny.

Now, ladies and gentlemen, you are doubtless wondering how you should read The New Yorker. The answer is quite simply, however you prefer. The more fashion-conscious among you would probably prefer to hear that the typical reader flips through the magazine absorbing all the artwork and cartoons first, before returning to the beginning to read the articles.

Now we have arrived at the gallery of contributors. Since 1926, The New Yorker has attracted — indeed, sometimes discovered — some of the greatest writers and artists of the 20th Century. It continues to be a lamp for the butterflies of the English language. Ladies and gents, you will doubtless recognise many of these names and faces:

That concludes our guided tour of The New Yorker magazine. Feel free to wander the galleries and examine its long and prestigious history, as well as some of the personalities (some might say characters) who formed it and guided it and helped it become what it is today. Thank you for joining us, and please return someday.

1'Worth reading' is relative and may not reflect your values in reading material. We are not responsible if you find the contents of the New Yorker contrary to your taste.