Funnybones - Children's Stories Content from the guide to life, the universe and everything 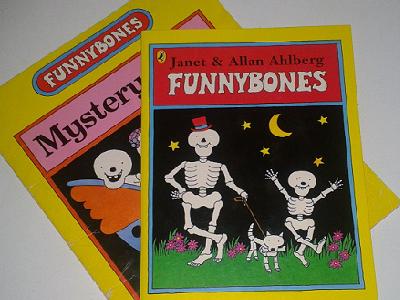 The beginning of a scary and horrifying tale for Halloween? Perhaps. Until you continue with the story and discover you're reading about two rather happy skeletons, and their pet dog! The Funnybones stories, aimed at children ages four and up (either to be read to, or read by), tell us of a Big Skeleton1, his friend Little Skeleton, and their inquisitive Dog Skeleton. They all live together in a dark, dark cellar in a dark, dark house - and come out at night to play in the park, the zoo, or even go on holiday.

Originally written and illustrated by husband and wife team Janet and Allan Ahlberg, the first Funnybones book was published in 1980. It was a runaway success, thus many more adventures featuring the charming and friendly skeletons followed, although the task of illustrating later fell to André Amstutz2. The pictures accompanying Allan Ahlberg's stories of the trio of skeletons are not scary in the slightest, the always-smiling faces and the cartoon quality (rounded shapes and bright colours, even though the stories are all set at night) heart-warming and enjoyable.

Critics of the stories (both young and old) may ask how skeletons can get up to all manner of mischief having no musculature, ligaments, or indeed brains - but many young minds the world over look past these biological inaccuracies. Well, most of them. Some will still ask the complex questions like, 'Where is his skin, Mummy?' or 'If he eats that, why doesn't it just fall out?' If that happens, there's another h2g2 Entry on the subject of Answers to Children's Questions that may help in placating the little Einsteins.

The Funnybones books became extremely popular, so much so they were released as audio books also. One h2g2 Researcher recalls:

We used to have an audio tape of Funnybones. I had to 'lose' it, my son played it too much!

There are many of the stories to choose from, including:

All are published by Puffin Books, and can be snapped up at most good bookstores or online shopping sites like eBay. Or you could wander into second-hand book shops, market stalls or even garage sales and find them going cheap.

The Funnybones were later transferred from book form to television in a collection of 12 five-minute animated episodes by the BBC and Welsh television's S4C in 1992. The voices of the Funnybones were provided by comedian Griff Rhys Jones who, incidentally, sang the xylophone (or ribcage?) accompanied theme tune too. Almost as much fun as the books, the TV series had just as much energy and charm. Not to be missed out on, a Funnybones book is a must for any bookshelf. So go on, tickle your own funny bone!

1Who likes to wear hats, a rather natty bright red tophat with a blue band being his original favourite.2Firstly the illustrating was transferred to André as Allan was writing quicker than Janet could draw! Sadly, Janet passed away in 1994, succumbing to breast cancer. But Allan still wrote, many illustrators, including Amstutz, bringing incredible life to his wonderfully optimistic tales.