The Original 1978 Unesco World Heritage Site List Content from the guide to life, the universe and everything 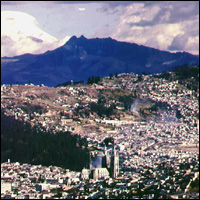 Unesco was established in 1945 and published its first list of protected monuments in 1978. There are now over 800 World Heritage Sites, forming a comprehensive and expanding catalogue of world treasures. Yet at first there were just a dozen, giving a rather random scattering of global gold.

The 1978 version was never intended to be a definitive list - it multiplied in size the next year - and is consequently rather different to some of the more traditional lists of world wonders. Where other lists usually try to include everything, and are therefore often very 'samey' (the Taj Mahal, Great Pyramid, and so on), the original Unesco list is a rather more eclectic collection of worthy sites.

The selection seems to owe most to the countries which ratified the treaty. Not a single site came from Australasia/Oceania or Asia. Egypt, Greece and Italy could not manage a representative between them, while Britain had nothing until 1986.

The numbers in the list below relate to the order the sites were discussed, so gaps appear where a site was rejected or held over for inclusion later.

Associated in the popular consciousness with Charles Darwin's discovery of evolution by natural selection. The site is also noted for its unique, endangered ecosystem and the many indigenous species of the islands - including giant tortoises, lizards and many birds. Around a dozen major islands make up the archipelago, along with numerous smaller islets.

Trapped between a volcanic hotspot and a tectonic plate subduction zone, the archipelago is changing slowly and continuously. The islands were formed in the west by volcanic activity, and were initially bare and rocky. The tectonic plate they are on is travelling east, taking the islands away from the hotspot. As the islands have aged, life has taken root on them, with the more easterly ones having more abundant vegetation and animal species. At the east end of the archipelago, the collision of this plate with the Nazca plate drags the islands downwards and they slowly sink into the sea, never to return.

Noted for its concrete cathedral and striking statue of Mary, reminiscent of Rio's iconic statue of Christ. Quito is situated on rolling hills high in the northern reaches of the Andes. It has a well-preserved old quarter with narrow, winding streets that are mostly car-free (although motorcycle infested). At an altitude of 2,800m, Quito is one of the highest capital cities in the world.

Quito was a Spanish provincial capital and retains much colonial architecture. Prior to that, the site was occupied by an Inca city, although sadly nothing of this now remains.

Aachen is the oldest cathedral in Europe and the resting place of Charlemagne. It is quite a small building with an attached courtyard. The current structure is based around the Palatine Chapel, constructed during the late 18th Century.

Aachen cathedral has a peculiar stone seat that is said to be the throne of Charlemagne. Scratched into the side is the grid of a Roman tabula board. This was a game, with counters and a board, Roman soldiers often used to play; it’s the ancestor of backgammon. But you can't play it when the board is vertical, as it is in the Aachen throne. This shows the stone slab was once horizontal, and is in fact a Roman paving slab which was re-used to make the seat - an unlikely piece of recycling for the throne of an emperor!

A Viking settlement. Since this is an archaeological site, there isn’t a great deal for the casual visitor to see. A handful of reconstructed Viking buildings may be toured by the public, but this site is primarily of academic value, rather than a tourist destination.

Located in Newfoundland, it’s the site of the only Viking village found in North America, outside Greenland. Given the site's proximity to mainland USA, it proves the Vikings discovered the New World 1,000 years ago. It’s by far the oldest European settlement in the Americas.

Water-hewn cliffs and rare species. The Simien mountains in the Gondar region of Ethiopia are noted for their jagged, colourful peaks and sparse, brushy vegetation. It’s one of the great trekking centres in the region.

Simien contains many indigenous species, including the Ethiopian wolf, Gelada baboon and Walia ibex. Recent declines in the number of these creatures has caused the site to be added to the Unesco list of World Heritage Sites that are in danger.

Pretty self-explanatory. The churches, as they say, were always there, but humans needed to cut away all the bits of rock that weren't church. They’re sunk into the ground, so must be accessed by narrow stairs. These churches are truly unlike any other religious architecture.

Lalibela is said to have been constructed as an imitation of Jerusalem, following that city's capture by Muslims in 1187. The dozen rock-hewn churches are generally believed to be a few centuries more modern than this1.

Pretty, pretty. Splitting the Unesco numbers can't disguise the fact that Canada seems to have sneaked in two sites that - although no doubt worthy in themselves - would rarely trouble most lists of the top 12 most important cultural sites in the world. The Mackenzie mountains are sliced open by the Naha Dehé (South Nahanni river), leaving a series of great gorges and rapids.

Only accessible by air, and with less than a 1,000 visitors annually, Nahanni is by far the least-visited of the original sites. Virginia Falls, the highest in North America, lie within the park. At 90 metres, they’re more than twice the height of Niagara.

Former slave trade post. Goree serves as a reminder that human cultural history is filled with things we should be reminded of, even though we would rather not be. Densely populated by 1,000 people crammed into just 45 acres, this tiny island just off the coast of Dakar has a clutch of museums and relics of the slave trade.

It’s officially part of the city of Dakar.

Mesa Verde is known for its Pueblo ruins. One of the very few well-known archaeological sites in the USA, Mesa Verde was ruined long before European settlers arrived. The dry-stone remains, sheltered under cliff walls, were long considered mysterious. How could a civilisation have arisen in such a barren region, and what could have wiped it out? Modern analysis suggests over-population and the overuse of resources turned the area into the desert it is today.

The Anasazi people who built these dwellings were incidental to the plot of the long-running 1990s TV series The X Files.

Still the only Unesco site to have been parodied in a major cartoon series. Yellowstone National Park, centred on Yellowstone lake, is noted for its volcanic coloured springs and thermal geysers - notably 'Old Faithful'. Yellowstone was the first area in the US to be designated a national park.

Yellowstone is also the only Unesco site with the potential to wipe out humanity. Sitting on top of a dormant super-volcano, it’s one of the world's largest volcanic systems. When this erupted 2.1 million years ago, it covered approximately a third of what is now the USA in ash. If such an eruption were to happen again, it would certainly mean the end of all life in the USA, and the global effects would probably destroy all civilisation on Earth. Fortunately, the probability of a large caldera-forming eruption within the next few thousand years is exceedingly low.

Spit 'n' Polish. Left largely untouched by the World Wars of the 20th Century that devastated many other European cities, the former Polish capital of Krakow includes the old town, Kazimierz (the Jewish quarter) and Wawel castle. It has many buildings of historic and artistic interest, as well as a spacious market square.

Krakow is steeped in mythology. It’s said to have been founded by Prince Krak on the site of his battle with a dragon. Wawel hill is claimed to be one of the seven sites where stones thrown by the Hindu god Shiva landed. Finally, the hejnal - an ancient alarm call - is played from the tower of St Mary's church every day, stopping abruptly in commemoration of a bugler who was shot in the throat by a Tartar archer in 1242.

Strangely, the vinegar lake never made it onto the list! Wieliczka is perhaps not as widely known as it deserves to be, but is none the less a true wonder of the world. Hundreds of metres below the surface, salt miners carved for themselves a wonderful array of (mostly religious) architecture and decorations from the living rock.

Decorations include sculptures and bas-reliefs. The mine remained in operation from the 12th Century until 1996. A small fraction of it is now open as a tourist attraction; it receives well over a million visitors each year.

It’s notable that five countries have two monuments each, whereas only two countries have a single site2. Five of the sites are primarily natural, against six that are architectural. Just one is of primarily archaeological value; all but one are reasonably accessible to (and enjoyable by) casual tourists.

In terms of geography, North America has four sites, Europe and Africa three each, and South America two.

1And certainly bear little resemblance to anything found in Jerusalem.2We can only take the inclusion of two sites as a tribute to a moment of unexpected bureaucratic efficiency by the Ecuadorian government.