Hank Marvin - Guitar God Content from the guide to life, the universe and everything 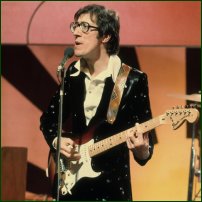 Hank Marvin's expressive use of the tremolo arm has made him one of the most distinctive guitarists ever:

On a recent visit to London I got off the Tube and walked through the tunnel at South Kensington towards the museums. A young man was playing 'Cavatina' on his guitar - I actually thought I was hearing a recording of Hank Marvin until I saw the busker. It was hauntingly beautiful and an absolutely unforgettable experience.
- An h2g2 Researcher.

Brian Robson Rankin was born in Newcastle-upon-Tyne on 28 October, 1941. As a child he learned to play the piano and the banjo, but hearing Buddy Holly converted him to his life-long love — the guitar. He attended Rutherford Grammar School and made friends with Bruce Cripps, who is now better known by his stage name Bruce Welch. Brian changed his name by deed poll in the late 1950s to Hank Brian Marvin, signing his later autographs as 'Hank B Marvin'. Marvin and Welch, in a group called The Railroaders, came to London to compete in a talent contest in 1958. Taking part in the same contest was a group called The Velvets, and one of the members was drummer Brian Bennett. Then Marvin and Welch got together with Pete Chester (the most well-known, he was Charlie Chester's son) and formed the group The Five Chesternuts. They were overheard by Johnny Foster, who was on the lookout for a backing guitarist for a band he was managing. Spotting the tall, slim, good-looker with the distinctive guitar sound, he offered Marvin a job in Cliff Richard's band The Drifters. Marvin agreed so long as Welch would be included in the line-up.

Marvin met Cliff for the first time when Cliff was being fitted for a pink stage jacket, which Marvin never failed to mention when engaging with audiences while Cliff was off-stage changing outfits. Marvin is credited as the man who introduced the Fender Stratocaster guitar into the UK, although it was imported from the US by Cliff Richard. The Drifters was the name of Cliff's backing group when Marvin and Welch joined, but they had to change it due to a clash with the American singing group of the same name.

The Shadows became a tremendously successful band in their own right. The original 1959 line-up was Marvin, Welch, bassist Jet Harris and drummer Tony Meehan. Their first instrumental single as The Shadows was 'Apache', which had been written by singer/songwriter Jerry Lordan. Upon its release in 1960 it knocked 'Please Don't Tease' by Cliff and The Shadows off the number one spot, and remained there for six weeks. 'Apache' was also voted single of the year, and has since been covered almost as many times as 'Unchained Melody'.

In 1961 Tony Meehan left to join Decca Records as an A&R man, and Brian Bennett joined The Shadows, followed shortly after by the departure of Harris, who was replaced by Brian 'Liquorice' Locking. The Shadows perfected a swing of their guitars and performed steps which became known as the 'walk'; this was very popular with audiences who would copy the steps whenever a DJ played a Shadows tune.

In 1963, Harris and Meehan had a number one hit with 'Diamonds'; their second release 'Scarlett O'Hara' made the number two spot and 'Applejack' reached number four, all within the space of nine months. The same year, The Shadows had a number one hit with 'Foot Tapper', then 'Atlantis' made number two and 'Shindig' also reached the Top Ten, with follow-up 'Geronimo' making the top twenty in December - all in all it was a great year for instrumental successes. Locking left The Shadows and was replaced by John Rostill - this line-up continued until 1968.

Every once in a while, a great song comes along. Until one does, I'm going to sing one of Hank's.
- Cliff Richard's little joke.

Marvin has also had successful solo ventures as a musician, singer and songwriter. He wrote 'The Day I Met Marie' for Cliff and 'Geronimo' for The Shadows. He also co-wrote many other hits such as 'I Could Easily Fall in Love with You' and 'In the Country' for Cliff.

Marvin helped compose the music for the films Expresso Bongo (1959), The Young Ones (1961), Summer Holiday (1963), and Finders Keepers (1966). He appeared in the films as well, sometimes wearing some strange outfits, but very rarely had any dialogue. In Cliff's film Wonderful Life, while Cliff was romancing Susan Hampshire's character 'Jenny', 'The Shads' were hiding behind a wall, each sporting a fez, ready to start accompanying Cliff to 'Do You Remember?'

It is impossible to underestimate the cultural impact of Gerry and Sylvia Anderson's smash hit film of 1966, and Marvin's contribution to it. For Thunderbirds are GO, Marvin not only wrote 'Shooting Star' but also 'starred' as one of the backing group puppets. This film is not only etched on the memory of millions of adults who watched it agog as children, it makes interesting viewing today, if only to giggle at the lead singer of the band — Cliff Richard Jnr.

As long as people knew they were going to hear the instrumental hits, they were quite willing to listen to the vocal stuff as well. They loved it, in fact. But when Marvin, Welch & Farrar were only doing vocal numbers, you could sense the unease of the audience.
- Hank Marvin

Marvin formed an acoustic-based vocal harmony trio in 1971 with Bruce Welch from The Shadows and New Zealand vocalist John Farrar, a project which had been conceived in 1968. Marvin and Welch had been songwriting together with a good deal of success, and discussed the possibility of forming their own group to break away from their 'Shadows' identity. It was Olivia Newton John, Welch's fiancée, who made the introductions to Farrar, as she had worked with Pat Carroll, Farrar's wife.

The debut Marvin, Welch & Farrar album unfortunately went on sale the same month that EMI released the new Shadows album, Shades Of Rock featuring their new keyboardist Alan Hawkshaw. Cliff Richard had his own BBC television series and he tried to promote the new trio by featuring them as guests in five shows. Marvin wrote 'Silvery Rain' which was on Marvin, Welch & Farrar - this became a Top 30 single when covered by Cliff and also featured in Olivia Newton John's sexy dance workout video Let's Get Physical.

Bruce Welch left the trio after suffering a nervous breakdown following the termination of his engagement to Olivia Newton John. Marvin, Welch & Farrar had been booked for a week at Batley Variety Club, but Bruce only performed for one night before quitting, leaving Marvin and Farrar to face the music. They spiced up their act as best they could by playing some old Shadows favourites. Marvin and Farrar continued to work together with Pat Carroll and Olivia as the backing singers for Cliff Richard's next tour in the Far East.

In August, 1973, Marvin and Farrar released the eponymous album Hank Marvin & John Farrar which received only a lukewarm reviews and didn't chart. Later, Marvin admitted in an interview that the material lacked direction. However, 'Small And Lonely Light' was a hit for Olivia and 'Galadriel' which was covered by Cliff, are a tribute to the talent of the songwriter.

'The Shads', as they were affectionately nicknamed, reformed in 1974 and became the UK's premier instrumental group, the line-up being Marvin, Welch, Bennett and Farrar. They were chosen to represent the United Kingdom in the 1975 Eurovision Song Contest held in Stockholm, Sweden. Their song, 'Let Me Be The One', in a complete reversal, was written by Cliff. Unfortunately, just like Cliff (twice), it didn't win the contest, although the single did make the UK Top Ten. Specs Appeal, released in 1975, with Welch fully recovered and back in the fold, sold well. 20 Golden Greats in 1977 was such a smash it was re-released in 2003 to a brand new generation of fans.

In 1977 Farrar left The Shadows to move to the US, later sharing the success of the mega-hit Grease: he had written 'Hopelessly Devoted To You' and 'You're the One that I Want' for Olivia's character 'Sandy' to sing in the film.

Down to three regular members, Marvin, Welch and Bennett, in 1983 The Shadows collectively received an Ivor Novello Award from the British Academy of Songwriters. When they performed at the Empire in Liverpool in 1989 with guest players, it was a sellout. Their greatest hits double CD Life Story went gold in the UK album charts, and their following 'farewell tour' of 2004 proved so popular that they immediately booked an extension into 2005 and played in 42 cities throughout Europe. In The Queen's  birthday honours list of 2004, Hank Marvin, Bruce Welch and Brian Bennett were each recommended to be awarded an OBE, although Marvin declined to accept his honour.

I feel very honoured to have been recommended for an OBE and I'm happy that both Bruce and Brian have also been recognised. However for personal and private reasons I've decided not to accept it.

One of the nicest guys on the planet.
- Guitarist Magazine.

Marvin is such a notable guitarist that there are guitars named after him. There is the Burns Marvin and the Fender Stratocaster Hank Marvin Signature model.

Marvin's name is used in cockney rhyming slang: the only one that is printable here is 'I'm Hank Marvin', which means 'I'm starving'.

Marvin's appearance has changed little over the five decades he has been delighting audiences, except for his 'specs', which started out quite bookish like Buddy Holly's thick-framed pair. Over the years his taste in eyewear was never as outlandish as Elton John or as distinctive as ex-World Champion snooker player Dennis Taylor, but still we can't imagine Marvin without them. One of Marvin's solo albums, Hank plays Abbey Road, had a huge pair of glasses on a zebra crossing on the cover, mimicking The Beatles' famous Abbey Road sleeve.

Family Life Down Under

Marvin emigrated to Perth, Western Australia in 1986, where he still lives with his family, who are all committed Jehovah's Witnesses.

It had been a source of frustration in the past, but...I'm fairly philosophical about it now. I feel that most of us find some kind of niche, or marketplace if you like. It's not always satisfactory to the artist, to feel they've been slotted into a pigeonhole, but that's the way the business works.
- Hank Marvin ruefully remarking on the lack of impact his vocal work received.