The Story of Nutella Content from the guide to life, the universe and everything 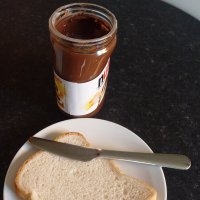 While there are a number of chocolate and nut spreads available, the market leader is widely known as Nutella. It's a creamy chocolate hazelnut spread which boasts the tagline - 'The Original Hazelnut Spread' and it's made by Ferrero in manufacturing plants worldwide.

In 1940s Italy, the founder of the Ferrero company, Pietro Ferrero, created Nutella. Owing to rationing across Europe, chocolate was only available in very small measures. So, mixing cocoa with toasted hazelnuts, cocoa butter and vegetable oils, Pietro created a spread which he called pasta gianduja1.

A hefty 660 pounds of this spread was sold in February 1946 - a great success for Ferrero. To supply the demand, he began to encourage local farmers to increase the cultivation of hazelnuts.

Supercrema gianduja was created in 1949. This variety was both inexpensive and spreadable, which was a great plus-point. It also enjoyed enormous success and in 1964 was renamed 'Nutella' and marketed outside Italy. Today Nutella is popular all over the world.

Nutella describes its product's taste as:

creamy and chocolatey, with a hint of roasted nut flavour that will delight your taste buds as you enjoy each delicious mouthful

Some may say it is too sweet and sickly, but as with most things it all boils down to personal tastes.

Most people spread Nutella on bread but it can really be eaten with almost anything2. Many recipes using Nutella can be found on the Internet – people have obviously enjoyed experimenting with the spread. Nutella also offers some recipes of its own.

Nutella comes in an oval-shaped jar. The word 'nutella' is written in bold letters on a white label with the letter 'n' in black, and 'utella' printed in red. Beneath this is a picture of a piece of bread spread thickly with Nutella, alongside a glass of milk with a couple of hazelnuts scattered around.

Nutella is also available in smaller tubs, which are shaped like small glasses and are attractive enough to re-use at home.

A serving is estimated to be about two tablespoons, each containing about 200 calories. Calculated as a percentage of the Daily Values diet,3 in a single serving there is 15% fat, of which 10% is saturated fat, 0% cholesterol and 8% carbohydrates.

Even though the product contains peanut oil and almonds and should technically be avoided at all costs by people who are allergic to nuts, Nutella claims that:

The peanut oil that Nutella contains goes through a hot-solvent extraction process which takes out all the proteins, so you are left with pure peanut oil which is generally non-allergenic. Only oil prepared by the hot solvent extraction process that is commonly used in the United States is known to be free of protein. But, of course, please consult your doctor about any health concerns you may have.

1This means 'hazelnut paste' and is pronounced as 'pasta jon-du-ja'.2Bagels, crackers, bananas, apples, porridge to name a few. 'Playful' couples have even eaten it off each other's skin, and some like it straight off the spoon.3Percent Daily Values are based on a 2000-calorie diet.4Nutella does not seem to appreciate this connection with Gnutella and has obtained an interim injunction to cease and desist from using the name Gnutella.