The Bogeyman Content from the guide to life, the universe and everything 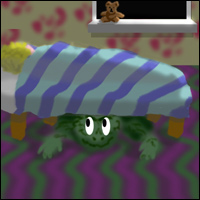 When you turn the lights out at night, climb into bed and pull the covers up over your head, do you worry about what may be in the cupboard, under the bed or creeping out from under the stairs? Does your blood run cold, and goose pimples emerge across your arms and neck? Do you peep from under the covers and imagine you see a shadow in the corner or hear a creak upon the top stair? Then you must be thinking of the bogeyman.

Who is the Bogeyman?

The bogeyman has been with us for a very long time. A mostly nocturnal creature deliberately used to frighten and scare - particularly misbehaving children - he can be found worldwide. Under futons in Japan, in closets in America, chimneys in Germany, in the dunny in Australia and lurking behind the bedroom door in other parts of the globe. The threat of the bogeyman was that he would carry you away and eat you, or punish you for doing something naughty in some nefarious way. But where did he get his name from?

Many modern terms for some of the myths and legends in the United Kingdom can find derivation from old central European gods. The bogeyman is a case in point, perhaps the general 'evil'. The Slavic for god is 'bog'. After Christianity came to central Europe and made its way to the British Isles, many of the deities from previous beliefs became evil spirits. It is natural to assume that the gods of pre-Christian Britain became known as these nasty, horrible, frightening or mischevious beings; bogs, bogeys, boggles or boggarts. These terms for pagan gods, demons and devils followed an evolution from the fearsome and terrifying to the almost comical. The ancient pagan gods that were worshipped in the pre-Christian world were given offerings from their followers at festivals such as Beltane and All Hallow's Eve. With the advent of Christianity, the offerings made to them became smaller and smaller.

There was a time when a saucer of milk or a slice of bread left outside the door at night became an offering to the old gods, the bogies and boggarts. They soon became house spirits and in some instances these old gods, now fairy creatures (brownies, pixies and hobgoblins) could be used for help around the home. If you captured a boggle or boggart and took it home, it would quite happily do your chores in exchange for a bowl of milk. If the milk was not forthcoming, however, the creature would bring you bad luck. The troublesome bogeyman was commonplace and many tales of bogeys are similar to the following;

There was once a farmer who was having trouble with his crops. One day when planting seed, he came across a bogie who laid claim to the farmer's field. After a long argument, they decided that the farmer would work the field and they would divide the produce between them. The farmer offered the bogie 'Tops or bottoms?' and the bogie chose bottoms. The farmer planted wheat that year and all the bogie got was stubble and roots. Next year, the bogie chose tops and the farmer planted turnips, so the bogie was no better off. Next year, the bogie told the farmer to plant wheat and they would have a mowing match and whoever won would have the field for keeps. The farmer divided the field into two equal halves and a little while before mowing went to a blacksmith and bought hundreds of thin metal rods. Before the morning of the competition he hid them amongst the bogie's half of the field. When the day came, the farmer mowed splendidly, but the bogie complained about the 'hard docks' and his scythe became so blunt that he could hardly cut butter. The bogie asked the farmer when they should 'whiffle-waffle' (whet their scythes together) and the farmer said they would do it about noon. 'Oh, then I've lost,' said the bogie. Off he went, and troubled the farmer no more.

However, there were still some bogeys that were seen as devils and fearsome creatures. These creatures have the ability to shape-change into many different beasts, but the favourites are horses, donkeys and phantom hounds. They could also appear as balls of spinning light or fire and would often make horrible unearthly noises and terrifying roars or screams. Taking delight in scaring people, particularly travellers, and often considered portents of disaster or even death, the horrifying bugbear, bugaboo, barghest or bogle kept the familiar legend of the 'thing that goes bump in the night' alive.

Throughout the British Isles, the Bogeyman has many different names and many different faces. In the west country he was the bucca-boo or tankerabogus. In the northern counties he could be known as a brag, bugbear, bugaboo, bullbeggar or even padfoot. Elsewhere he was referred to as a dobb or dobby, and so fearful was this particular incarnation that a tradition of hanging holed stones (dobby-stones) over doorways to prevent the spirit from entering the home may be the precursor of hanging a horseshoe above the doorway to bring good luck. In some places the bogeyman was even given his own name. Tommy Rawhead, Jenny Greenteeth or Bloody Bones were known to much of England. Scotland had the bogle and Wales the bwgwl or bwg1, while in Ireland he was known as the boddyman or boogeeman, a term that travelled to the Americas with Irish immigrants.

In other parts of the world the bogeyman has kin in the German Putz2, the Danish Spoge and the Swedish Spoke3. In hispanic cultures (Spain, Mexico, South Americas) there is a female bogey called La Llorona and Russia has the Shurale. Australia has the monstrous Bunyip and Italy the fearsome Spacaluccio. In Asia, Japan has the nightmarish Ten-gu, whereas China has the cannibalistic Kiang-Si and India the taloned Hau.

In Haiti, the notorious dictator 'Papa Doc' Duvalier took the name of the bogeyman who visited bad children at Christmas4, 'Tonton Macoute', and brought the threat to life by using the title for his infamous death squads.

Wherever in the world you go, there is always something in the dark behind the door at night.

The traditional trolls, ogres and giants, much like those found in the Brothers Grimm fairytales can be likened to bogeymen and, as mentioned, there are many names and forms taken by the bogey worldwide. The term 'bogeyman' has come to represent a person or thing of which someone has an irrational fear, while 'bogey' was used by fighter-aircraft pilots in the Second World War to identify unidentified aircraft and is still a slang term used by pilots today. Golfers often refer to a bogey, this being a score over par. Only a bogeyman could get a perfect score. Of course children have found a way to alleviate their fear of the dreaded bogeyman. The bogey, booger or boogie (dried up mucus stuck in the nasal passage) are not feared as much by children, but more adults. Having a bogey on your child's finger, edging closer and closer to your clothes is a parent's worst nightmare.

In more recent times the bogeyman has enjoyed representations in print (Raymond Brigg's Fungus the Bogeyman and the Discworld stories by Terry Pratchett) and in Hollywood (Mr Oogie Boogie in Tim Burton's Nightmare Before Christmas). The creature has perhaps evolved more from a terrifying spirit into something a little more timid over time. However, whatever name the bogeyman is given (be it Fungus, Mr Boggle or even The Gentleman), he will always be a creature that instils fear and terror - a supernatural phenomenon that can be associated with vampires, werewolves and ghosts.

Stories of the bogeyman abound, but the best can be found in the following:
1Perhaps this is the origin of the word 'bug', a term for an insect. Derivatives include bugbear and humbug (The Norse hum meaning night and bog, god. A nightgod or spirit of the night).2Perhaps the forbear of Puck, or Robin Goodfellow.3Origin of the english 'spook'.4Good children received a visit from 'Tonton Noel' (Uncle Christmas), whilst most of us could expect to see 'Tonton Macoute' (Uncle Knapsack) with the threat of being carried away in that sack.