How to Survive Falling Out of a Plane Content from the guide to life, the universe and everything 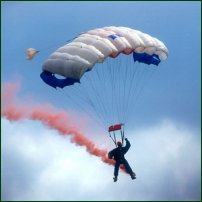 Let us imagine that you are on a long distance flight and you decide to answer the call of nature. Misunderstanding the stewardess, you open the wrong door1 and now find yourself falling from 30,000 feet, the average cruising height for civil airliners. What are you going to do?

Assuming the shock of entering a 500 mph wind at -45°C hasn't given you a heart attack, there is a way of getting out of this pickle if you remember one simple piece of advice - don't panic.

The first thing to do is to spread-eagle yourself with your arms and legs outstretched. This creates the maximum wind resistance and, believe it or not, gives you a bit of control over the angle you fall at. Although you are falling from five miles up, you won't continue accelerating until you hit the ground. Shortly after your impromptu departure from the aircraft, you reach terminal velocity. That is to say, you reach a speed that you won't exceed. By spreading your arms and legs, wind resistance means you will be travelling at around 125mph. There, already it doesn't seem so bad does it?

Time to Admire the View

You now have about two and a half minutes before you stop falling. Almost time to boil an egg, or listen to most of a pop record. However, now is not the time to be thinking about food or Simon Cowell's latest prodigy. Start looking down, because the decisions you make now could save your life.

You should be looking for water that is at least twelve feet deep. If you were on a transatlantic flight it shouldn't be hard to spot some. Diving into water at 125mph is survivable, but it's going to sting a bit. Hitting the water with your arms straight up above your head and your body extended into as neat a line as terror allows means you're going to lose a little skin and suffer some bruising, but at least you'll have a great story to tell the kids. Belly-flopping will leave a pinkish stain on the surface.

Not Falling Into an Ocean

Falling onto land is a little more problematical. As the ground approaches you at a dizzying speed, start looking for lakes, rivers or swimming pools. In the absence of water, try looking for snow. It's at times like these you really understand the effects of global warming, though. Ideally, you're looking for soft, lightly packed snow about thirty feet deep. Chances are, you won't find any. Another option is a natural hot mud pool. This will break your fall wonderfully, although the very high temperatures may introduce another factor into the chances of you surviving. But at least you'll have a wonderful complexion at the funeral, so it's worth considering.

Getting a Bit Tense

In the absence of oceans, lakes, rivers, swimming pools, mud pools or soft, deep snow, your options are becoming a little limited. We're now looking for things to break your fall. Trees are problematical. Branches may be flimsy but dense enough to slow a body down, but they do have a tendency to have a large spiky bit pointing straight up from the centre. Trying to avoid large spikes is probably a good idea. Start looking for circus tents, marquees, caravans or rock concerts. It is possible although unlikely that these kinds of things will slow you down enough to ensure that only the majority of the bones in your body are broken.

A Life of Fame and Fortune

If you landed in the ocean, you have a good chance of survival - always assuming you can swim a few thousand miles and avoid the sharks, Portuguese Man O' Wars and pollution. A successful landing on terra firma will no doubt have attracted a large and appreciative audience who will help pour you into an ambulance. With a little luck, mobile phone footage of your escapade will be posted on the Internet before you actually arrive at the hospital, where you will be treated by underpaid, overworked staff on equipment supplied by the lowest bidder and rejected by vets. If you can survive the NHS2, a life of morning chat shows, reality television and laxative commercials awaits you.

In Case You Thought This Was Impossible

There have been a number of recorded cases of people surviving falls from aeroplanes. In January, 1942, Lt IM Chisov of the Red Army Air Force fell 20,000 feet into snow and lived to drink his vodka. A year later, Sgt A Magee fell 20,000 feet from his bomber. Rather originally, Magee picked the glass roof of St Nazaire train station to help break his fall. Not the type of arrival at Platform 3 that commuters were expecting. In December, 1943, Flight Sergeant Nicholas Alkemede fell 25,000 feet into snow and, to the initial disbelief of his German captors, survived.

1We admit this is extremely unlikely. The external door of a passenger airline has numerous precautions to prevent it being opened in mid-flight.2The NHS is the UK's National Health Service.