Metal Gear Solid on PlayStation and PlayStation 2 Content from the guide to life, the universe and everything 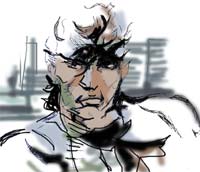 When people think of video games they typically think of men sitting in a darkened room shooting everything in sight or racing round a track again and again and again. Then there was Metal Gear Solid.

First released on the MSX games system (1987) and then on the NES (1988), the first game in the series - Metal Gear - was part of a new idea for gaming, moving away from the traditional shoot-'em-ups, racing games and the kind of adventure games that had been repeated numerous times beforehand. Inspired by such films as The Great Escape, Hideo Kojima thought up a concept that set out to create a video game in which the player had to rely on stealth rather than on brute force. The game was picked up by a giant in the Japanese games industry, Konami.

The setting was the near future (1995), a time when a heavily armed, fictional South African nation known as 'Outer Heaven' is developing a nuclear-equipped walking battle tank called 'Metal Gear'. FOXHOUND (a secret NATO Special Forces unit designed to quietly deal with terrorist threats to the world), sends in its finest agent, a man codenamed 'Grey Fox'. When Grey Fox is captured, NATO then decides to send in a rookie agent, codename 'Solid Snake'. Snake frees his fellow agent and also succeeds in neutralising the threat of Metal Gear. However, he is shocked to find that the cause of the uprising was none other than the head of FOXHOUND - 'Big Boss' - who is reputed to be the greatest soldier ever.

A Sequel or Two

Metal Gear 2: Solid Snake was set in 1999, when the inventor of a new energy resource that could be used to solve the energy crisis is kidnapped and held in a heavily armed Asian nation known as Zanzibar Land. Solid Snake is called in to fight again and ends up destroying Metal Gear for the second time, as well as recovering the new energy technology. However, two surprises strike as Snake finds that his old friend and fellow agent Grey Fox is a traitor. Snake's defeat of Grey Fox leads him to another discovery - not only did Big Boss survive the Outer Heaven incident four years earlier (and was of course behind this uprising as well), he reveals to Snake that he is his father. The news of his parentage does not distract Snake from his mission. He engages Big Boss in a fight to the death: this time, Big Boss does not survive. After this mission Snake retires to Alaska, hoping to live out his days in peace.

There was a third Metal Gear game before it made its transition to PlayStation, though this was not developed by the same development team as the original two and is therefore not included in the history of Metal Gear.

Metal Gear Solid took PlayStation by surprise - not surprising for a stealth-based game! It was quickly hailed as being one of the best games for the console, selling millions of units worldwide (and helping to shift a few extra PlayStation consoles too). The first Metal Gear game on PlayStation (which was also released for the PC market) was, like its predecessors, set in the near future and put the player, once again, in control of the now-retired FOXHOUND operative Solid Snake.

The reason Snake is being brought back from retirement is that the rest of FOXHOUND has suddenly rebelled and has taken control of an island off the coast of America which contains a storage facility for dismantled nuclear warheads, and they are threatening to launch a nuke unless their demands are met1. To make matters worse, they are allied with the secret Genome Army, an organisation of genetically modified men created by the USA as 'super soldiers'; like FOXHOUND this army is top secret.

The player's mission at the start of the game is to infiltrate the facility and free two important hostages, then to find out if the terrorists do possess a nuke and, if so, to disable it and/or the terrorists. Snake is sent in alone, not as a 'one-man army', but because only one man working alone could succeed. At first your only help comes from your colleagues back at mission HQ, who talk to you via your CODEC (See the section - 'Cardboard Boxes?' below). These include your mission commander, your data specialist2 and the mission doctor who is there to monitor your health and try to help you out as much as possible.

Despite its reputation, both among gamers and within the gaming community, Metal Gear Solid was still one of the very few games to employ the concept of stealth where possible (although after this PlayStation release, many other games latched on to the idea - including later instalments of Tomb Raider and Sony's own Syphon Filter series). While there were weapons you could use, you could not run around blasting anyone who got in your way, as was the traditional method of progression in video games. Doing this was a sure fire way to find yourself surrounded by terrorist soldiers and faced with a disappointingly speedy end to your game. Instead you had to go quietly. Breaking necks, using strangle holds, firing the occasional shot when you were discovered, sneaking around in the shadows - oh and hiding in cardboard boxes: that was what this game was about.

Yes, cardboard boxes; as Snake says in Metal Gear Solid 2 'Love your cardboard box: if you look after it then it will look after you!' These flimsy items were what the player was, jokingly, meant to hide from his enemy in... which sometimes did work, though in general they would kick the box out the way to discover Snake crouching underneath. This humorous idea continued into Metal Gear Solid 2: Sons of Liberty on PlayStation 2, and in the next game, titled Metal Gear Solid 3: Snake Eater, crocodile head hats seem to replace them as you swim in the water, though the boxes will probably make an appearance in future games to please the fans. It was a few jokes like these that deflated the sense of realism of the game - using tomato ketchup as fake blood to trick a guard was one other such small instance - but never detracted from the enjoyment. In fact, for many fans, the ingenuity and wit behind the game's structure made it what it was.

Luckily, you were also given a lot of practical equipment:

With these tools in hand the game commences.

In Metal Gear Solid, as Solid Snake starts to investigate the island, you quickly discover that not all is as it seems. The first major discovery is that the leader of FOXHOUND is a man called Liquid Snake who supposedly has the exact same face as Solid Snake. Then you find out that the terrorists were not lying about possessing a nuke; in fact they were in possession of another of the USA's secrets: a bipedal nuclear tank known as Metal Gear REX, which had been built using the same technology as that used in Outer Heaven. As the game unfolds, further developments lead you into an intricate plot containing a love interest, betrayal and a mysterious figure that seems to want to fight Solid Snake. Each time you play through the game you'll notice something you did not before: perhaps a conversation you overheard the first time you played through didn't make sense, but does now that you know the full story. In fact, at one point in the game your actions can slightly change the end of the story; but no more will be said here so as not to spoil the rest of the game.

Sons of Liberty was the second game for one of Sony's consoles, this time on PlayStation 2. The extra graphical and processing power had not been wasted - enemies looked more life-like and acted more realistically. Also new options for dealing with enemies became possible. One major change was that enemies now possessed radios and used these to call in reinforcements, or just regularly to report that everything was okay. This meant you could no longer get away with killing an enemy and leaving the body lying around. If you did that, a squad could be dispatched to discover why he had not reported in.

In this game you start off as a rookie FOXHOUND operative known as Raiden. Raiden has been dispatched to an offshore facility known as 'Big Shell', which is designed to process water that was polluted by a blown-up oil tanker and extract oil. The reason you are being sent in is that another USA Special Forces unit, known as 'Dead Cell', have taken over the facility during a tour by the President and are threatening to blow it up if their demands are not met. Again your initial mission is to free a hostage, and prevent the terrorists from blowing up the facility, as it would present an environmental catastrophe. And again, as events unfold you discover that you have not been told everything, the main thing being that the terrorists seem to have a nuclear weapon - the new Metal Gear RAY, which was designed as an anti-metal Gear after the incident covered in the previous game. Although as before the focus of the game is one character employing stealth (with use of that CODAC communicator from the previous game), there are plenty of plot twists here that you would never predict, and a chilling end that will leave you thinking about a lot of things for a few days to come. Of course, Solid Snake does appear in this game; for the first time in any Metal Gear he is not a playable character in the main game, but he does play a part in some of the bonus games that are revealed to players as bonuses on successful completion of other tasks.

The Future of Metal Gear

At the time of writing there are two other Metal Gear games on the horizon. Firstly there is The Twin Snakes, which is a revised version of PlayStation's Metal Gear Solid for the GameCube. The other game is Metal Gear Solid 3: Snake Eater, a prequel to all of the games currently in existence and is due for release in late 2004. So far details are sketchy, but it seems that you are in control of an agent known as Snake who later becomes... Big Boss! The game is set during the Cold War and also heavily features outside environments - the trailer shown at E3 2004 (a computer and video game convention held in the USA) shows Snake sneaking around a forest taking out guards. It seems unlikely that Metal Gear 3 will be the end of the series, and Solid Snake will be sneaking back into action soon.

1Their demands being several billion dollars in cash and the body of Big Boss.2Someone who gives you many hints about the game in the form of philosophical comments.