Treasurer's House, York, UK Content from the guide to life, the universe and everything 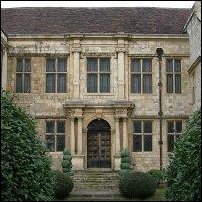 Treasurer's House is a historic house in York, owned by the National Trust. It is located just behind York Minster, near Dean's Park, which makes it very easy to find, as the Minster is hard to miss! The house has a full-time staff and hundreds of volunteers who sell tickets and act as room stewards, answering visitors' questions. Do be sure to check the house is open if you're particularly desperate to visit as it is closed over the winter to allow a proper clean and currently does not open on Fridays at all. Entry is free to the tearoom and garden, but you have to pay to enter the house proper, even if you're a National Trust member. You also have to pay extra to go to the cellar - which you might want to do, keep reading - or you can pay less to just visit the cellar.

The house was built on the site of the medieval mansion which was official residence of the Treasurers of York Minster. This was one of the most important positions in the Minster administration, so an impressive house was a must to entertain guests of the Minster. Some of the holders of the position were too important to actually do it for themselves – they would take the revenues while leaving a sub-treasurer to do all the work. The office was abolished in 1547 as a result of the Reformation1.

The current house is almost completely different as there has been much rebuilding. After the abolition of the position of Treasurer, the house was sold. In 1565 it was bought by the Youngs, a very powerful family, who held it for several generations. In the early seventeenth century they rebuilt the main part of the house. The present front, abutting the garden, is their work. The Youngs sold the house during the English Civil War and from then it had many owners.

It was eventually bought by Frank Green in 1897. The Greens were an industrial family – Frank's grandfather Edward had invented a fuel economiser which was very successful in the climate of the Industrial Revolution. It made the family rich. Frank's father, also named Edward, moved up in the world through his marriage to Mary Lycett, a vicar's daughter, who told him that their money should be used for a gentlemanly lifestyle. He became an MP2 and then in 1886, a baronet. Frank's father became acquainted with the Prince and Princess of Wales, later to become Edward VII and Queen Alexandra, after he built a house on an estate next to Sandringham, one of the royal residences. It was decided that Frank's brother Lycett, as the eldest, would live a life of leisure while Frank took over the business.

Over the course of time Treasurer's House was divided into several properties. Frank Green bought one in 1897 and then set about buying out the other owners. Once he had succeeded, he had the exterior restored by getting rid of later extensions which did not fit the house. He decorated the rooms in various different period styles as a setting for his collection of antique furniture. He knew exactly where he wanted everything and had studs in the floor to mark their proper places. Look out too for signs around the house that Green left to instruct his workers. One says that workmen should always wear slippers inside the house. In 1900 the Prince and Princess of Wales visited with their daughter. Some of the rooms are named after the family - the Queen's Room, the King's Room, and Princess Victoria's Room.

Green changed the architectural layout of several of the rooms. For example, the West Sitting Room was made smaller to allow for a corridor leading from the Entrance Hall to the Hall, a fact that leaves the fireplace looking oddly out of place on the left of the room. The biggest change he made was to the Hall. Green was certain that the house must have had an original medieval Great Hall. To recreate it, he took out a room above to double the ceiling height, took out divisions and wall panelling and changed windows. He also had the fireplace raised to sit at what he thought must have been the original floor level, resulting in the hearth being a good foot above the current floor. The Blue Drawing Room was also originally two rooms before Green had a division removed.

Green retired in 1930 and moved to Somerset. When he did so, he left house to the National Trust complete with contents – the first time the charity had been given a house and its contents. Frank Green died in 1954 at the grand old age of 93.

Treasurer's House Under the National Trust

In the 1960s and 1970s the house was decorated in 18th-Century style throughout but in the 1990s it was returned to how Green had left it. For example, the current colour of the Blue Drawing Room, a sort of mid point between blue and green, was the colour Frank Green had the room. It was rediscovered during redecoration in 1999. Under the National Trust the room had been decorated in off-whites, but during redecoration they scratched off existing paint layers to find the original colour, which they then had specially mixed and repainted. It is not known exactly how kitchen was laid out so it has been given appropriate furnishings.

York is known as the most haunted city the world3, and one of its more interesting ghostly encounters happened in the cellar of Treasurer's House. In 1953, a young plumber named Harry Martindale who did not know about this discovery had an exciting story to tell about a day he spent working in the depths of the house. He claims to have heard a horn then seen a collection of Roman soldiers. The men were tired and dirty, hardly the usual image of a pack of proud Roman soldiers. What interested historians was a number of details about the soldiers such as their armament and the colour of their kilts which were different to what historians expected, but later turned out to be accurate. It is this which persuades some otherwise sceptical people to believe this story, and perhaps, to believe in ghosts in general. The soldiers marched through the wall into the cellar, though they were cut off at the knees – they were walking at the level of the original Roman road, part of the city's Roman legacy, which was later discovered under the existing floor at the level where their feet would have been.

1It was not reinstated until 1936.2Member of Parliament.3According to Ghost Research Foundation International – no, really.