Hoover the Talking Seal Content from the guide to life, the universe and everything 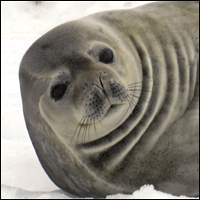 Seals are generally rather cute and endearing things, with their puppy-like faces and comically ungainly movement on land. How about an orphaned seal? Well, naturally that makes it more endearing. What if that seal could talk? Yes, it happened.

On 5 May, 1971, a Maine fisherman discovered an orphaned common seal1 pup on the coast of New England, USA, at a place called Cundy's Harbor, to be precise. The fisherman, whose name was George Swallow, raised the pup in a bathtub. He ate so much fish he was named Hoover2. He became very much part of the family and lived much like a pet dog. Imagine the surprise of passers-by when they saw George Swallow driving into town accompanied by a seal poking his head out of the window. He soon became too big to keep in a bathtub, and was transferred to a pond outside. According to Swallow, it was there that Hoover started imitating human sounds.

Eventually Hoover became too large to take care of easily, and George donated him to the New England Aquarium in Boston, Massachusetts. Swallow said that the four-month-old seal could talk, but he was not taken seriously.

Fame at the Aquarium

When Hoover started reaching sexual maturity, around the age of four, the staff at the aquarium discovered that he could imitate human speech with remarkable accuracy. Most seals make normal, seal-like sounds when trying to attract a mate, but Hoover said things like 'Whaddaya doin'?' and 'Get over here!'. Interestingly, all his speech was delivered with a strong New England accent, implying he had learned directly from the fisherman who had reared him.

It is quite likely Hoover is the world's most famous seal. He appeared in Reader's Digest, on ABC's Good Morning America, The New Yorker, and on the US National Public Radio. His 'speech' was sometimes indistinct, but the sounds he made were quite unique. He is said to be the first non-human mammal ever to produce them. His favourite phrases were 'hello there', 'get over here', 'get outta here' (these two often delivered in quick succession for added confusion) and, of course, 'Hey, Hoover, hey, hey, hey'. His vocalisations were generally accompanied by something resembling a guttural laugh. Some recordings were made in 1981 by Katherine Ralls, and some time later by one Terrence Deacon.

Hoover died in 1985 during his annual moult, at a reasonably old age for a seal (around 14). He received his very own obituary in the Boston Globe. He fathered six pups in his time, but none of them had his ability to vocalise. Interestingly, one of his grandchildren, Chacoda, has shown some signs of possessing the gift.

So why did Hoover have this unique ability, something that not even the non-human primates3 possess? Birds are of course known to be able to vocalise - who hasn't been fascinated by a talking parrot? - but they have vocal tracts that are physically quite different. Pinnipeds4 have mammalian vocal tracts very similar to those of humans. They are the only animal group able to imitate human sounds using mechanisms similar to our own. But so little is known about how this works that science cannot say for sure why this particular seal can 'speak'.

One explanation could simply be that Hoover was exposed to human vocalisations from such a young age, and this exposure continued throughout his life. He had extensive contact with humans both at the fisherman's home and at the aquarium. It appears this learning process can be sped up by 'teaching' the animal to talk, much in the same way one would train it to do tricks. Hoover's grandson Chacoda is being trained and rewarded with tidbits of food when he speaks.

Additional encouragement is provided by the seal itself. Chacoda seems to like the sound of his own voice and has been seen talking to himself, using the walls of his enclosure to listen to the sounds he makes.

1Known as the harbour seal in the US and Canada.2As in the brand of vacuum cleaner.3Some great apes can communicate through sign language, but none of them can make the sounds of speech.4Seals, sea-lions and walruses.