Hidden Hemel Hempstead: Boxmoor Content from the guide to life, the universe and everything 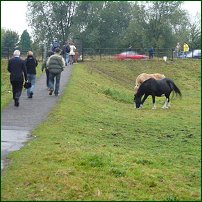 Hemel Hempstead in Hertfordshire is one of those places in Britain that is frequently derided. The original settlement, which dates back to the 8th Century, was expanded after World War II as one of Britain's 'new towns' to rehouse working-class families from London.

Sitting between the M1 (Junction 8) and the M25 (Junction 25), it's also a commuter haven. Hemel's most notable landmark is the Magic Roundabout in the town centre - and what a thing to be famous for, critics point out. In December 2005, Hemel Hempstead became more infamous as the site of the Buncefield oil depot fire, Europe's biggest peacetime fire. With its convenient motorway links, it's no coincidence that Britain's fifth largest oil depot was located just outside Hemel Hempstead.

A stranger to Hemel Hempstead researching the town on the Internet could be left ignorant about many of its positive aspects. The Boxmoor Trust is the foremost of these, with 480 acres of protected green space in the south-west corner of the town. In 1594, grazing and fishing rights on meadowlands between the Gade and Bulbourne rivers were conveyed to 67 inhabitants of Hemel Hempstead and nearby Bovingdon. These meadows had once formed part of the lands held by the Monastery of Ashridge, dissolved during the reign of Henry VIII.

Today the Boxmoor Trust, now a charitable organisation, administers this land for the public benefit of the current and future inhabitants of the area. No one can build on or develop it. The Trust is governed by an Act of Parliament of 1809, updated by a Charity Commission Scheme in 2000. Over the years, where Boxmoor Trust lands have been compulsorily purchased for transport schemes (the Grand Junction Canal in 1795, the London-Birmingham Railway in 1837 and the A41 road improvement in the 1990s) new land has been purchased to replace lost acreage.

The original function of the Boxmoor Trust land has changed over the years. In the summer months, the grazing Boxmoor ponies are a local attraction, and rare-breed cattle (Belted Galloway) and sheep (Norfolk Horns) call the meadows home. Today the primary use of the Boxmoor Trust lands is conservation of the local wildlife - particularly the natural habitat of the Bulbourne valley - along with recreation and leisure.

The Boxmoor Cricket Club (founded 1857) and a children's playground are sited on Blackbirds Moor, which is a popular park for local residents. The Trust hosts a free community music festival every other summer, called Music on the Moor, in Bulbourne Meadow; a 'conker festival' each autumn; and, in the summer, there are free one-day activities to introduce children to the local wildlife.

Otherwise, Boxmoor Trust lands lie undeveloped and open to the public - criss-crossed with public rights of way and various nature walks. Station Moor and Blackbirds Moor are characterised by avenues of mature horse chestnut trees, planted during Queen Victoria's reign. Sadly, some of these have recently been felled as they are approaching the end of their natural life spans1. The river Bulbourne runs through some of the Trust's lands, as does the Grand Junction Canal.

Sitting within the Boxmoor Trust lands is the former village of Boxmoor, which became subsumed by Hemel Hempstead in the 1950s and 1960s. Boxmoor Village, as it's known, retains a distinct character, with its own high street, post office, primary schools, social club and churches, both Anglican and Roman Catholic. The houses in Boxmoor are primarily Victorian family homes; and, although homes are in demand by commuters moving into Hemel Hempstead, the area retains a strong community.

Hemel Hempstead station, with trains to London Euston, was previously Boxmoor station. Surrounded by Trust land, and it is not unusual to see Hemel commuters walking home from the station, shouldering past grazing cows or horses on the pathways. Sights like these make it hard to believe that one has only left London half an hour behind by train.