Bourbon Biscuits Content from the guide to life, the universe and everything 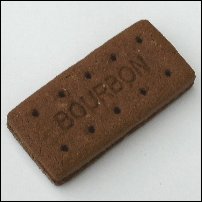 The chocolate bourbon cream is the single most perfect object known to man. Such is the enthusiasm for bourbons that new words have been invented to describe fans of the biscuit, such as:

For the benefit of those outside the bourbon distribution area, a bourbon cream is two rectangular biscuits roughly 3cm x 6cm, and 5mm in depth, on either side of an oval of chocolate goo which never spills out from the sides of the biscuit1. This chocolate invention has created many schools of thought depending on the personality of the consumer. For example:

How to Eat a Chocolate Bourbon Cream

Some gorge on the bourbon in the same way you would eat, say, a digestive, though some bourbers would argue this demotes the bourbon to mere 'everyday biscuit' status and labels it fit only for dunking purposes.

Spare a thought for the poor, anaemic, albino cousin of the bourbon biscuit - the custard cream!
- Harry Hill

1Unless you force it to.2This level of glucose is said to be called the 'bourbon event horizon'.