Using an Abacus for Addition and Subtraction Content from the guide to life, the universe and everything 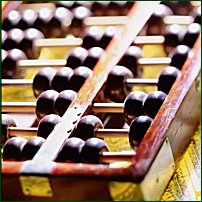 The world as we know it has ended. Thick clouds cover the Earth's surface, governments have collapsed, the electrical grid has disintegrated, and bands of raiders roam without fear, pillaging and looting. You seek to join a successful band of raiders, but the leader will let you in only if you become the clan accountant. Your computer battery has long since drained and there is no sunlight to power your calculator. Still, you smile, whip out your handy abacus, and start tallying sums.

This might seem like a far-fetched scenario, but there are many other circumstances where you might need to know how to use an abacus. You might stumble upon a wormhole and be thrown back to medieval France. You might be standing in the checkout queue at the grocers without your mobile phone, facing a suspiciously high bill. Maybe you just want to impress your grandchildren with how much harder everything was when you were a child. In any of these cases, knowing how to use an abacus will save the day — so read on.

Good question. An abacus is a mechanical calculator. When you look at a typical abacus, you see a shallow frame containing nine or thirteen columns (wires or rods) holding seven beads each. Five of the beads in each column lie below a crossbar and two of the beads sit above it. You can slide the beads up and down their columns on either side of the crossbar. Versions of the abacus have been around since the ancient Romans, and today people still use them in China and Japan.

The first thing to know about an abacus is how to position it. Answer: flat down. You can hold a small (pocket) abacus on the palm of your hand, or place a large one on your lap or on a table. Another important basic: before you start any calculations, all the beads should be pushed away from the crossbar. Finally, when you move the beads around, use your index finger to push the beads that are above the bar and your thumb to shove the beads that are below the bar.

And This Works How?

Now that you look like you know what you're doing, here's how the abacus works. Each column represents a single digit of a number. The first column on the right is the ones column, the second from the right is the tens column, the third is the hundreds, and on and on to a hundred million. The beads below the bar are worth one increment each; thus, a lower bead in the right column equals one, a lower bead in the next column over equals ten, and on to 100million. The beads above the bar are worth five increments each (eg, five, 50, 500...). The beads combine to represent a number when they are adjacent to the bar.

You're probably thinking, 'Wow, that's simple!' It is. All the beads adjacent to the bar spell out a number, while all the beads pushed away from the bar can be used to calculate.

So How About Some Maths?

Let's do some simple addition. Your abacus now reads 512. You can add 20 by pushing up two beads from the tens column and none in the ones column. Now your abacus displays five-three-two, or 532, which is exactly what happens when you add 20 to 5121. 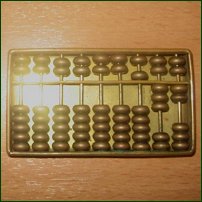 One last thing. No, two last things. When you have all five lower beads pushed up, you 'carry' the number to above the bar. 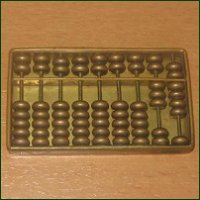 Meaning, you then push all five lower beads down and push down one upper bead. 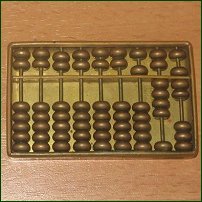 Add ten to your number. (Hint: push up one bead in the second column from the right.) Now your abacus reads five-five-seven, with the second five being represented by five lower beads. This is an unfortunate situation, since you can no longer add numbers to that column. So push down all five beads and replace them with a 'five' bead from above the bar. Now your abacus reads five-five-seven, with both fives represented by beads from above the bar.

Now, what happens if you add 500 to 557? Well, try it. Slide down one bead from the top of the hundreds column. Now you have two 'five' beads, which equal ten. If you remember arithmetic, you can't have a ten in any column. You have to carry it into the next column. Slide up both 'five' beads from the hundreds column, and slide up a single 'one' bead in the next column over, the thousands column. Your abacus now reads one-zero-five-seven, or 1,057. 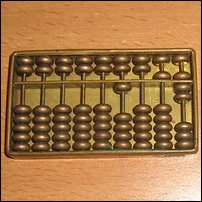 Easy Stuff! Bring on the Subtraction...

Well, here is where it gets complicated. When you subtract on an abacus, unlike on paper, you subtract from the columns with the greatest value first. Let's look at 1,057. To subtract 1,002 from 1,057 you would first subtract the one from the thousands column, and then the two from the ones column. You can probably guess that you do this by moving one bead in the thousands column and two beads in the ones column away from the bar. The result should be 55.

Feel proud for a few minutes. Then add 103 to your 55 to make 158 so we can get to the hard stuff. How would you subtract the number 14 from 158? Well, first we look at the tens column, which has a single five bead. You can't remove one bead from it, so push the upper bead up and replace it with five of the lower beads. Then remove one. (Technically, you could just replace the upper bead with four lower beads once you know what you’re doing.)

Next column, similar problem. There are two ways you can do this, with the same end result:

NB: You didn't need to move down both five beads; you could have calculated that you'd be removing six, which is larger than the second bead's value of five, and instead of adding two upper beads and subtracting, just added one upper bead and removed one lower bead. Being able to predict what beads you don't need to bother moving is important. It is the only way to deal with such equations as 28-9=?. You can't add two upper beads to the ones column to represent the borrowing because one of the beads is already occupied. You can only think: 'I'm borrowing 10 to subtract nine. All the borrowed ones cancel out except one (10-9=1) — so I need to add a single bead on the bottom of the ones column to represent that left over one.' Equation result: 19.

Cool — So Can This Thing Multiply?

Yep. And divide. But those operations are more complicated and won't be covered in this entry. Why not practice your addition and subtraction for a bit before moving on to the next level?

Fair enough. They are easier to use. Calculators of the powered variety can also do many more tricks — like decimals and negative numbers. But once you get fast with an abacus you'll look so much more impressive than someone using an electric calculator. Plus, you can use your free hand to sneak food; the clatter of the abacus beads will cover the sounds of your crunching and slurping. Your electric calculator can't do that, can it?

1If you don't believe this, try it on an electric calculator.