Dublin's Dead Zoo - The Natural History Museum Content from the guide to life, the universe and everything 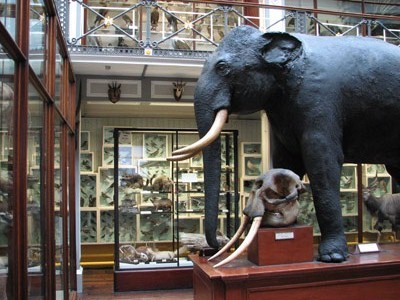 Please note: The Museum was closed from July 2007 until May 2010. It has re-opened, but the 2nd and 3rd floors are still closed, due to a lack of sufficient emergency exits. There are plans to build extra exits, but these are still in early stages.

Dublin's Natural History Museum is part of the National Museum of Ireland, which is divided between four locations, three situated in Dublin1 and one in County Mayo2. Known to generations of Dubliners as the Dead Zoo, it contains 10,000 specimens of animals.

The Natural History Museum is located in Upper Merrion Street, between Government Buildings and Leinster House.

This is a classic 'cabinet museum', with 10,000 specimens of animals on display in glass cases. It is virtually unchanged since 1900 - in these days when museums have to have lots of buttons to press and streams of kids who press the buttons and then run on if nothing has happened within two seconds, it is surprising to have a traditional-style museum, where nothing moves, nothing changes and nothing has changed for more than a hundred years. The animals are there and you look at them. While this might sound rather boring, and not the place to bring fractious children on a rainy day, it can be fascinating for the more thoughtful child, or adult for that matter, and is a treasure trove for the serious naturalist.

It's a restful place, isn't it? You can wander around at will, examining the mounted bison heads and the like, and wonder at the values of an earlier age. It has some of the atmosphere of a grand library. Even the time I was there when it was overrun by eight-year-old schoolkids, it managed to retain its dignity. Its formality makes it oddly remote, but its size makes it strangely intimate.
- An h2g2 Researcher

All the major animal phyla are represented. Arachnophobes might like to give the third floor a miss altogether because large spiders are the first thing you encounter.

The collection of animals originally belonged to the Royal Dublin Society. The building was constructed in 1856 and opened to the public in 1857.

The display of organisms in these museums rests upon concepts strikingly different from modern practice, but fully consonant with Victorian concerns: Today we tend to exhibit one or a few key specimens, surrounded by an odd mixture of extraneous glitz and useful explanation, all in an effort to teach (if the intent be maximally honorable) or simply to dazzle (nothing wrong with this goal either). The Victorians, who viewed their museums as microcosms for national goals of territorial expansion and faith in progress fueled by increasing knowledge, tried to stuff every last specimen into their gloriously crowded cabinets in order to show the full range and wonder of global diversity.
- Stephen Jay Gould, Naturalist

The ground floor contains an exhibition of Irish animals, both modern and extinct. Most impressive are the three skeletons that face you as you enter the museum: the giant Irish deer (Megaceros giganteus). These enormous animals lived in Ireland before the last Ice Age but became extinct when the ice came and covered the country. They stand two metres high at the shoulder and have antlers with a span of up to four metres.

Ireland doesn't have many native mammals, so rather than just presenting the animals in cases, scenes have been created: a family of foxes play outside their den; a stoat hides in the background, about to pounce on some grouse.

Around the sides of the hall are examples of birds and fish of Ireland. At the far end are all the creepy crawlies and slimy things. The cases containing insects have protective covers to keep the daylight off them. These should be lifted carefully as you never know what sort of a horrible bug or spider will be underneath.

Light floods through the glass ceiling, creating a fascinating interplay of brightness and shadow in reflecting off both specimens and architectural elements of iron struts, wooden railings, and the dark wood and clear glass of the cabinets themselves.
- Stephen Jay Gould, Naturalist

The first floor is the section which earns the museum its alternative title 'the Dead Zoo'. Here you will find mounted specimens from all over the world, including the zoo favourites of elephants, hippos and giraffes. The giraffe on display is one of the recent additions - the old giraffe had been there since 1899 and finally fell apart, so a new giraffe skin was brought from a zoo in the Netherlands, where it had died thirty years ago, and a taxidermist had to construct the giraffe on the spot, since it would be too big to fit in the door if done elsewhere. The new giraffe went on display in January, 2003.

The 2nd Floor is currently closed due to a lack of emergency exits.

The second floor is a mezzanine gallery running the whole way around the inside of the outer wall of the building. It contains a very important exhibition of ratites - these are the large flightless birds of the southern hemisphere. As well as ostriches, kiwis and cassowaries, the museum has skeletons of extinct ratites such as the Aepyornis (elephant bird), moa, Reunion solitaire and dodo (one of the very few complete dodo skeletons left in the world).

There are also many other birds.

The reptiles, fish and amphibians are rather under-represented in the museum. In the case of the fish, this is mainly due to the difficulty of preserving them. In some cases, glass models of fish are used instead of real specimens.

The 3rd Floor is currently closed due to a lack of emergency exits.

Although the most familiar animals are the big ones such as the mammals, birds and fish, most animals in this world of ours are tiny invertebrates, and there are literally more than a million different species. These are represented on the third floor, another mezzanine gallery.

Arthropods - actual specimens are on display. Watch out in particular for the bird-eating spider and the spider crab.

Molluscs - because these are very hard to preserve, the museum has instead a collection of unique glass models representing every detail of the molluscs. These were made by Leopold and Rudolf Blaschka in Dresden, Germany in the 1870s and are one of the highlights of the museum for the educated zoologist.

The so-called 'lesser phyla' of animals are all represented here as well, although the names assigned to some of the phyla seem to be out of date - these have been reclassified many times over the last century and the terminology used in the signs in the museum seems a trifle dated.

Admission is free. Only the ground floor is wheelchair accessible, and the only toilets are on the first floor and not accessible to wheelchair users. There is a small gift shop just inside the entrance.

I would recommend it to anyone with an interest in natural history. Without these collections built up over decades of careful study, we'd have a much poorer understanding of the world around us, and to visit such a place, almost frozen in time, is inspiring in its own way.
- An h2g2 Researcher

1The other two Dublin buildings are the Archaeology and History Museum in Kildare Street and the Museum of Decorative Arts in Collins Barracks.2The Museum of Country Life, in Turlough Park, Co Mayo.