The Archaeology and History Museum, Dublin, Ireland Content from the guide to life, the universe and everything 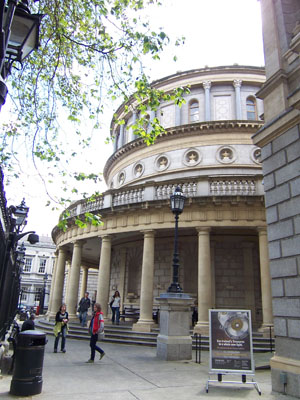 Dublin's Archaeology and History Museum is part of the National Museum of Ireland, which includes four individual museums at different locations – three situated in Dublin1 and one in County Mayo. The Archaeology and History Museum contains a priceless record of the history and prehistory of Ireland. The collection of pre-Celtic gold and the treasures of the Celtic Christian period are the most important exhibits, but there is a wealth of other artefacts.

The Archaeology and History Museum is situated in Kildare Street, which is just north of St Stephen's Green and south of Trinity College.

Start by turning left as you enter the hall and follow the history of Ireland from the earliest archaeological finds of the Stone Age through the Bronze Age. The Neolithic (New Stone Age) people of Ireland left little in the way of artefacts, other than thousands of tombs. Here you will find one of the tombs, a passage tomb from Sligo, which has been dismantled and transported to the museum.

The exhibition continues with Bronze Age artefacts – the Bronze Age people did not build enormous visible tombs, but a lot of goods were buried with the dead. Here you will find bronze shields, swords, spear heads and even trumpets. There are stone moulds in which axe heads were cast, and other accoutrements of metallurgy.

Also on display is a huge dugout canoe, more than 15m in length, made from a single trunk of a tree. Judging from the size of the trunk, the trees were much bigger in those days! This canoe was never finished, but it is impressive nonetheless.

Bronze Age people buried their dead in graves known as cists (pronounced 'kists'). These are rectangular holes lined with slabs of stone. One of these cist graves is on display, complete with the skeleton of the occupant. Always a popular exhibit with the kiddies!

When you've gone the whole way around the outside of the hall, descend into the middle section and be astounded by the gold. The Bronze Age people of Ireland appear to have been among the richest in Europe, if the amount of gold found is anything to go by. Some of the gold may have come from the alluvial deposits in the rivers of County Wicklow, but most of it was probably imported from Central Europe, which suggests that the Irish people traded quite a bit with the rest of Europe.

The central open area of the hall features all sorts of gold artefacts: lunulae, gorgets and torcs (three different types of neck adornment), dress fasteners and bracelets. Parts of Ireland are covered in a thick blanket of peat known as 'bog' - ancient peoples used to bury caches of golden objects in the bog. Nowadays, the peat is cut, dried and used as fuel. Sometimes, peat diggers come across these caches of gold. It is obvious from the depths at which they were buried that they were not intended to be ever retrieved, so it is thought that they were offerings to the gods. The gold items are still in excellent condition.

The gold artefacts can be divided into two main periods: Early Bronze Age and Late Bronze Age. In the Early Bronze Age, the most common type of adornment was the lunula, a flat gold necklet in the shape of a crescent moon. This was usually inscribed with simple patterns, such as zigzags and triangular sections filled in with parallel lines.

In the Late Bronze Age, more elaborate forms of metalworking had been developed, and the twisted gold collars known as torcs were more popular, as were many items embossed with patterns.

Particularly intriguing are the ear adornments, flat cylinders about 1cm high and anything up to about 7cm in diameter. When these were first discovered it was thought that they were boxes, but nobody knew what people might have kept in them. Then it was discovered that the ancient Irish would pierce their ears and stretch the hole in the earlobe to an enormous size. The ear adornments were held in the earlobe holes.

Look out for the Broighter Hoard: this collection of gold objects found at Broighter, near Limavady, includes a beautiful model of a boat about 10cm long.

Off the main hall downstairs are two rooms known as 'The Treasury'. This section celebrates the golden age of Irish workmanship, in the time of Celtic Christian Ireland (500BC - 1000AD). Bronze, silver and gold artefacts used for religious purposes are on display: chalices, bell shrines, book shrines, brooches and other goods.

The quality of metalwork is enormously better than that of the Bronze Age – it now features the famous Celtic artwork, complete with elaborate interlaced panels, spirals and decorative animals.

The highlights of this section must be:

Slightly out of place in the treasury are examples of Sheela-na-gigs. The museum has an extensive collection of these carvings of women displaying their genitals, and a few are usually displayed in the Treasury at any time. However, most of these come from Norman churches rather than Celtic Christian ones, so they would be more appropriate in the section of the museum on medieval life.

The Vikings started arriving in Ireland in about 800AD and set up many cities around the coast. They lived relatively peacefully there until about 1200AD, when they and all the rest of Ireland were conquered by the Anglo-Normans. This exhibition mainly features Viking artefacts from excavations in Dublin.

A nicely-presented exhibition on Ireland in medieval times and during the European Renaissance (1200 - 1700). Under the Anglo-Normans, Ireland settled into a stable medieval lifestyle similar to that throughout Europe, with the feudal system of lords and serfs.

The Road to Independence

A rather dull exhibition commemorates Ireland's fight for freedom from rule by Great Britain from the period 1700 - 1921. There are plastercasts of the heads of various important people, uniforms of the soldiers fighting for Ireland and copies of the various proclamations of independence.

A small exhibit in just one room, this is a very impressive collection of artefacts from Ancient Egypt (3000BC - 300AD), including four mummies of humans and one of a cat.

Here you can find loads of things which were acquired in the last ten years or so. They haven't been fitted into the general exhibitions. They are well-presented in boxes and behind doors and panels, making it a game to find them. Each is accompanied by a description of where and when it was found and what it is: for example, a small piece of Minoan jewellery from Ancient Crete, found in a bag of potatoes from Cyprus. This is a great section for children.

The entrance to the museum is through a huge circular hall, which also houses a gift shop. You'll probably want to spend some time here on your way out. The hall itself is an impressive piece of architecture, with an enormous high dome and a mosaic floor showing the 12 signs of the zodiac.

Admission is free. It would take days to see every single thing in the museum, but a reasonable tour of the museum would take about two hours.

1The other two Dublin buildings are the Natural History Museum in Upper Merrion Street and the Museum of Decorative Arts in Collins Barracks.