The Nebra Sky Disc Content from the guide to life, the universe and everything 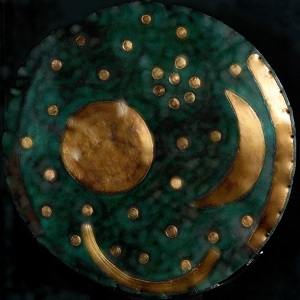 The Nebra Sky Disc is one of the most interesting archaeological finds in recent years. Dating from 1600 BC, it is a bronze disc about 32 centimetres in diameter with a diagram of the heavens embossed in gold onto it. The disc was found near the town of Nebra in eastern Germany (the state of Sachsen-Anhalt). The disc was made by Bronze Age people, the race that lived in Europe before the arrival of the Celts, and is said to be the oldest chart of the heavens in the world.

The disc was found in a cache of bronze goods, including axes and daggers, in a Bronze Age site at the top of a mountain, the Mittelberg. It is thought that the site would originally have had a good view of the skies and the horizon all around, and might have been used as an observatory. The astronomical information on the disc is particular to the latitude of the location where it was found, so it is likely that the disc was made for and used in the site where it was finally hidden.

Description and Interpretation of the symbols on the disc

At one edge of the disc is an arc which looks like a boat sailing on the sea. The tiny indentations along each side of the arc may represent the oars of the ship. Many ancient peoples imagined the sun as travelling from Western to Eastern horizon after it set in a special ship. This may be a depiction of the Ship of the Sun. If so, it means that the disc should be held in a vertical plane, with this 'boat' at the bottom. In this orientation, the rest of the symbols in the centre of the disc fall into place as a picture of the heavens.

On the left and right sides are two long arcs. These span about 80 degrees each. The difference between sunrise on the summer solstice and on the winter solstice is 82.7 degrees at this latitude, as is the difference between the sunsets on the two solstices. The two arcs are said to represent the portions of the horizon where the sun rises during the year. (The gold coating on the left arc, representing sunset, has fallen off and is lost).

Between the two arcs are a full circle and a crescent. The crescent obviously represents a crescent moon, while the large circle may be the sun or a full moon. (The gold on the sun/full moon circle is damaged). In the background are 23 stars dotted in an apparently random pattern, and one group of seven stars which is said to represent the Pleiades star cluster (the Seven Sisters or M45). X-Rays indicate that under the gold of the right arc are two more stars, so it is likely that the two arcs were added some time after the other features.

It is an astronomical fact that when the crescent moon appears in a particular orientation to the Pleiades, there is an eclipse seven days later. Is the picture on the disc intended to portray this? We'll never know for sure, as there is not enough detail in the picture.

Around the outside of the disc is a ring of crude holes punched through the metal. It is thought that these are for attaching the disc to something, rather than forming part of the astronomical diagram. Perhaps the disc was stitched to a piece of heavy cloth?

What was the purpose of the disc?

If the disc was intended as an astronomical tool, the only thing on it that is accurate is the pair of arcs. With the disc in a horizontal plane, these could be used to examine the position of sunrise and sunset; the cache site was on the top of a hill, a good place for looking at the sun. The site was surrounded by an artificial low bank, which could be used for measuring the position of the sun on the horizon. The position of the sun at sunrise and sunset is a good indication of the time of year and can be used to predict times for planting and harvesting crops; the Bronze Age people were an agricultural society. Alternatively, the disc might have been a teaching tool, explaining the mysteries of the night sky to students.

The finding of the disc

The disc was found by treasure hunters in 1999. They removed the disc from the site and attempted to sell it to local archaeologists. By the laws of the state in which it was found, it should belong to the state, so they discovered that they couldn't sell it legally. In 2003, they attempted to sell it to a collector in Switzerland, but the 'collector' turned out to be part of a 'sting' operation, working with the Swiss police. The disc was recovered and is now safely in the hands of the legal owner, the state of Sachsen-Anhalt. It is under examination in the Museum of Halle and will eventually go on display there.

It has long been known that so-called primitive people had advanced knowledge of the skies: the New Stone Age builders of Newgrange in Ireland aligned the monument with the rising sun at the Winter Solstice in about 3200 BC. Stonehenge, built in about 2000 BC, features many astronomical alignments. The Nebra Sky Disc is the earliest known portable guide to the heavens, and the first example of such knowledge in Central Europe. It shows that the knowledge of the skies was not restricted to one group in one location but existed throughout Europe in the second millennium BC.

For a good picture of the disc, look at the Official Nebra Sky Disc website, although the text is in German.