Shopping Trolley Tokens (UK) Content from the guide to life, the universe and everything 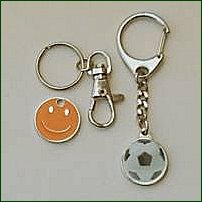 Shopping trolley tokens are a relatively new invention in the UK. They were specifically designed as a substitute for a one pound coin1, which a customer needs to insert into a slot in order to use a shopping trolley at some, though not all, supermarkets.

Why a Coin-operated Shopping Trolley?

It's likely this initiative was employed due to the amount of trolleys supermarkets were losing due to theft, vandalism, or being dumped in the nearest river or lake, sometimes, though not always, by teenagers taking them away. (The situation wasn't helped either by adult customers who simply couldn't be bothered to return their trolley to the trolley bay.) Another consideration may have been that shopping trolleys abandoned in car parks can cause a multitude of dangers and problems. Then there's the initial cost of buying the trolleys, at a starting cost of approximately £50 each for your basic trolley. An additional cost for the bigger supermarkets was the salary of employing someone to spend their days wandering about in the car park and nearby area rounding up abandoned trolleys and returning them to the bay. The answer to these issues is the coin-operated trolley, which works like a deposit. You put your one pound coin in the slot, pull the trolley out, and when you've finished your shopping, you simply return your trolley, push it into the trolley in front, put the metal t-bar from the front trolley into the appropriate slot on yours, and recover your one pound coin.

With more and more people using debit or credit cards, it's not always convenient to carry cash, which is where the trolley token comes in. It is designed as a key ring - even if you don't carry cash, almost everyone carries keys, either house keys, car keys or both. As you can imagine, the token is the approximate size and shape of a one pound coin. It is made of alloyed metal, with a hole near the edge that enables the token to be fashioned into the key ring.

Of the two surfaces of the token, one is a shiny silver colour that sometimes shows the manufacturer's details; the other surface can be any colour or design imaginable, including company and charity logos. These tokens, much like badges, may eventually become collector's items.

There are a few different trolley token key ring design types, which include one where the token is detachable, and one where it is not; there are other types, however, these are the basic two. The detachable token has a small clip, whereby you simply unclip the token, use it, then clip it back onto the key ring. The other is attached to a small chain, is not detachable, and is not suitable for all coin-operated trolleys.

The detachable token has the most advantages; as well as being able to use it in any coin-operated trolley, it is also ideal if you don't have remote central locking on your car, as opening the boot to load the shopping into it is extremely difficult when your car keys are attached to the trolley.

The tokens are inexpensive to buy, between £1 to £2, so if you have one that is of sentimental value, due to where you purchased it, what design it has on it, or who bought it for you, it's worth investing in another token to avoid using your special token, which you can keep safe, preserved and unscratched.

The coin-operated lock is usually located on the right-hand side of the trolley's handle. However, as in almost everything, there's always the exception. A minority of supermarkets have their coin-operated lock on the left-hand side, or even in the middle of the trolley's handle. In one type the slot for the coin can clearly be seen. Placing the pound coin or token into the slot, releases the lock, by pushing out the metal t-bar (it is attached to the next trolley in the line), located at the rear of the device, allowing you to remove the trolley from the rest of the trolleys. Both types of token key rings are suitable for this type. The detachable token can be used attached, or separated. However, if you do use it separated, it's worth making sure that you place the token in the slot with the hole at the front, so that if necessary you can attach the clip to the token and pull it out of the slot when you return the trolley. Some trolleys can be a bit temperamental, and try to hang on to your token. Well, actually, as the token is smoother than a pound coin, it's more difficult to grip it, to pull it out of the slot.

There is another coin-operated type, where you need to detach the token from the key ring, and it is not suitable for the undetachable token. Like the previous one, the coin slot is located on the right hand side of the trolley's handle, but the coin/token is placed in a recess at the top of the device. To release the lock, which again is attached to the next trolley in the line, you need to push the section holding the coin towards the handle - the chain is very likely to get stuck or break during this process. Releasing the lock is very similar to the previous device; you place the metal t-bar in the slot at the rear of the device. Putting your hand over the top of the coin or token when releasing it will prevent you from having to pick it up off the ground, as sometimes happens.

When the coin-operated trolley was first introduced they were not popular with everyone, and they still cause difficulties for some customers with disabilities affecting their hands, such as rheumatoid arthritis. However, the coin-operated shopping trolley has seen a significant drop in the amount of trolleys lost each year by the companies that have invested in them. There will always be a few customers who buck the system, find their own way to remove the coin/token, without returning the trolley to the bay, or think that the coin/token is a good price to pay for a handy trolley to take home.

1Other countries have the coin-operated lock made to the specifications of a coin of their currency; for example, the Euro is the currency in Ireland. Trolley tokens are available (free from some supermarket chains) in the size of the Euro.