Victoria Bitter Content from the guide to life, the universe and everything 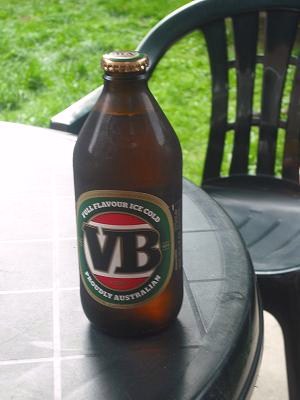 Chuck us a VB, mate.
- a common Australian request.

Victoria Bitter, or 'VB', is a brand of Australian lager that is drunk mostly in the state of Victoria, but is favoured by many Australians both at home and overseas. It is recognisable by dark green labelling with the letters VB stamped in black with a bold red trim. Victoria Bitter is brewed by Carlton & United Beverages, a subsidiary of the Foster's Group, but tastes nothing like Foster's Lager - which is is one of its many saving graces.

VB, while called a bitter, isn't really all that bitter. In fact, in the UK it was renamed Victoria Beer, so it wouldn't be confused with the English bitters. It's a very tasty lager, light on the stomach and not overly fizzy. You can chuck it down your neck straight from the bottle or glass without the fear that the bubbles will cause you to cough and splutter, or, worse still, end up with beer dribbling out of your nose.

Victoria Bitter does have a slight bitter aftertaste from the hops used in the brewing, but there is an almost sweet tang, probably due to the scent of the beer, which is somewhat fruity. With an alcohol strength of 4.9%, it's not a light beer. Be wary, they go down a treat, but drink too many, and you'll be on your ear. All too easy in the height of the summer.

For a hard earned thirst, you need a big cold beer. And the best cold beer is Vic, Victoria Bitter.
- Advertising slogan.

Dating from the 1890s, VB was introduced to the Australian public more widely with the advent of television. In the mid-1960s an advertising campaign featuring the orchestral score from the film The Magnificent Seven, images of working-class Aussies at work and play, and a suitably baritone voice-over by actor John Meillon brought VB to the lips of many more, including people from Western Australia and New Zealand.

You can get VB either draught or, for take-away purposes for your barbie or bush-bash, in tinnies, stubbies, longnecks, or twisties1. The favourite is the stubby, as it fits nicely into the hand, or if you're a dedicated beer drinker, a stubby-holder. These strange articles of Aussie paraphernalia are usually a suitably-shaped formation of wetsuit material2 that the stubby can sit inside. They keep the beer cold, and every true Aussie has at least a couple in the glovebox of the ute3, the drawer with all the gubbins for the barbie and maybe a few in the kitchen, usually on top of the fridge.

VB has many other names throughout Australia. Most of the time if you ask for a VB, or a Vic Bitter you'll get a stubby or pot of this beer.

It's the default beer in a lot of places. You walk into an unfamiliar pub, look at the taps, get all confused by the variety and latch onto the nice recognisable green tap as a good place to start.
- An h2g2 Researcher.

But other euphemisms for it can include 'Vicious Brew', 'Virgin Buster', 'Vitamin B' and the highly distasteful 'Vaginal Backwash'. You're more likely to hear it called these names at a barbie or B&S Ball, and probably by some galah who doesn't appreciate good beer and drinks that XXXX muck.

In some areas the stubbies are also called 'Green Grenades', since you can lob them into a pool on a hot day like you would a hand grenade4. VB does have a reputation for being the beer of choice for bogans5, but it's appreciated equally all over Australia, from Darwin to Melbourne, by men and women alike. It is also available in the United Kingdom and other places worldwide, more often at Australian-themed pubs or bars, but the occasional off-licence may stock it too.

VB is so good, it's won many awards6 including:

and
1All of which are various size bottles of beer in Australia, except of course the 'tinny', which is a can or tin.2Most commonly neoprene.3Utility vehicle.4The action of the throw, not suggesting that you should throw hand grenades into swimming pools.5The 'chav', or 'redneck' of Down Under.6Mostly from the Australian Liquor Industry.