Western Australia, Australia Content from the guide to life, the universe and everything 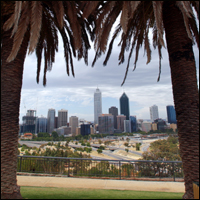 My stars, I love Western Australia. Everyone should go there. But preferably not at the same time.
- an h2g2 Researcher

Western Australia is, unsurprisingly, the western bit of Australia and actually makes up about a third of the island/country/continent. The first flood of European settlers to the land Down Under were apparently obsessed with royalty or wet places, hence the names of other states being New South Wales, Victoria or Queensland. The rest of Australia was divided with a ruler (not the royal kind) and a close eye on a compass, hence South Australia, the Northern Territory and Western Australia. This still does not explain why it is named Western Australia, rather than West Australia. Perhaps a fondness for cowboys was involved.

The capital city of Western Australia is Perth, quite believably the most isolated capital in the world1 - stuck somewhere between the Nullarbor Plain and the Indian Ocean. As with all Australian capitals (except Canberra, which is in the Australian Capital Territory to make sure you don't forget it is the capital), Perth is built overlooking water. The city bustles around the mouth of the Swan River, which has loads of black swans in it - they like you to throw bread at them. Despite its isolation, everything is available in the somewhat 'mediterranean' Perth, except perhaps an excellent curry and chocolate hobnobs. There is a huge number of pubs, bars, pubs, cafes, pubs, restaurants and pubs, some of which brew and/or serve excellent beer (try The Queens, The Norfolk and The Bootleg Brewery), and the local music scene has thrived, with some of the best Drum & Bass in the world to be found there. And like any other Aussie city, it's fairly laid back, although whatever you do don't mention a man called Kevin Sheedy2, or you're likely to cop a smack in the gob.

There are pretty much only three other cities in Western Australia: Freemantle (Perth's little brother down the coast), Broome (up the coast towards Darwin in the Northern Territory) and Kalgoorlie (where gold was mined during the Australian Gold Rush of the mid-1800s). Anywhere else is just a township that most likely sprung up around a big hole in the ground - a mine. The majority of Australia's iron ore and petroleum exports come out of WA, along with nickel, alumina, gold, zinc, copper, lead, diamonds by the truckload, coal by the shipload and salt. Many residents of the the 'Boom State' are often very vigilant around any bulldozers seen lurking in their neighbourhoods, as the large yellow machines have been known to remove houses indiscriminately - so as to get at the mineral goodies underneath them.

Apart from these exceptionally rural habitats around the mines, most other signs of life out in the desert of WA are simply places to buy petrol. As far as other things to see and do are concerned in Western Australia, you can spot kangaroos (some of them not squished by the side of the road), go swimming with dolphins, and go looking for Lasseter's Lost Reef - a legendary stretch of gold that would make you a billionaire in one fell swoop. And while it's a well-known fact that Aussies like to drink beer, they also like wine, and although Western Australia produces only about 4% of Australian wine by volume it is responsible for about 25% of the 'premium' wine. As with all wine growing countries, the good stuff is kept at home, so it is almost impossible to find good Western Australian wine abroad. You stand as much chance finding Killerby Semillon outside Western Australia as you do finding Chateau Ferrand outside France, or Niebaum Coppola beyond the Napa Valley. If you're after wine look for Cape Mentelle, Galafrey, Plantagenet, Salitage, or Moondah Brook (for a cheaper alternative) - but for the best in the region try anything out of the Margaret River area, popular with surfers and foodies alike.

Much of the food available in Western Australia is excellent to very good (if you search hard, you can find some fair meals). The Jaws Kaitan, on Hay Street in Perth, does excellent sushi - and while the Researchers have never been to Japan, there is no reason to expect they do it any better there. The Japanese did try to get to Western Australia during the Second World War, but got lost in the Northern Territory and never made it. One thing that has managed to find its way into WA is the cane toad - a nasty creature banned from entering the state. Travellers are cautioned to check their vehicles, and all other nooks and crannies that the sneaky toad might hide in, so it doesn't come any further south into the state than it already has. The cane toad doesn't make for good eating either, however, the steak in WA is very good. It doesn't come close to that found just west of San Antonio in Texas though. Speaking of which, that particular US state is only about a fourth the size of Western Australia...

So, come and visit WA. There's plenty of room.

1Many Aussies claim Perth is closer to the Moon than it is to Melbourne.2Coach of the Essendon Bombers - Aussie Rules team. His side defeated the local side, the West Coast Eagles, one year - and he took to screaming and shouting and waving his coat around his head. This resulted in him not being too popular with the locals.