The Mobile Phone and Forecourt Fires Content from the guide to life, the universe and everything 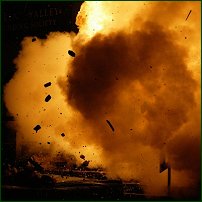 For some years now, mobile phones have been getting as much bad press as good, and while they are responsible for many a misfortune, they are also being tarnished by many rumours of supposed dangers. One such danger is the risk of your mobile causing a fire on the forecourt of your local petrol filling station.

This particular urban myth is one which has been bought into by the petrol station owners and most forecourts now display a sign stating Do Not Use Mobile Phones. Even more surprisingly, the mobile phone manufacturers also print a warning on their literature saying more or less the same thing.

The myth developed during the late 1990s when the number of forecourt fires increased dramatically in the United States of America1. The link was made between the fire and the phone because many fires started when those filling their cars were distracted while using a mobile phone - a pretty sound reason, you may think. However, the science does not support this reasoning.

Obviously the petroleum industry were concerned enough about these events to run some research on the matter, as have others, including the television programme Mythbusters.

While there was no doubt that forecourt fires happen, the cause of the ignition was the question needing an answer.

So, the first thing to look at was the mobile phone, and surprise, surprise, there just wasn't a large enough spark generated by a mobile to ignite petroleum fumes2. So the mobile phone is innocent of this particular assault on the health of the user.

Okay, so that's quite a short and sweet investigation which doesn't explain why the majority of fires involved a mobile phone. The myth was further complicated when it was revealed that more women than men were experiencing the forecourt fires. Somewhere in the region of 65% of the fires were started around women. In an earlier age it might have been thought that these women were witches, but with the true appliance of science we can assume that this is not the case.

The next question which required an answer was - what do people do when on the forecourt apart from filling their car with petrol?

Well, CCTV recordings of forecourt fires show that those involved have left the nozzle in the tank while filling and, crucially, returned to their seat to either get their wallet or inconveniently ringing mobile phone.

If you're still with this now you'll be thinking, 'How exactly does this cause ignition of petrol fumes?'.

The answer is surprisingly simple and indeed obvious: static electricity. Yes, the action of mostly younger people hopping in and out of their cars wearing synthetic fibres and failing to discharge the static electricity before returning to the nozzle causes a shock and a discharge when they reach for the nozzle. Kaboom! This spark is large enough to create an explosive fire.

So, why are more women than men affected by this phenomenon? Hidden cameras on several forecourts have revealed that women are far more likely to return to the car to collect something (or touch up their lipstick, grab the handbag, get the purse, remove the keys, answer the phone) than men. In fact, they are six times more likely to return to their seat on some errand than men are. Now that was a surprise!

Therein lies the problem, and the solution is simple: when exiting the car, touch the metal to release any static build-up and remember to do it again should you return to the car for any forgotten item - or to answer your phone.

Be Careful Out There

Should you find yourself in the unfortunate position of creating a static electricity spark and igniting a forecourt fire, remember: do not be a hero. Step away from the fire, do not attempt to remove the nozzle. The pump can be switched off remotely and the fire will be confined to the petrol tank of your vehicle. The forecourt attendant will have contacted the fire service and the most you will stand to lose is your car.

Mobile phones can cause electronic equipment to fail and should not be used on certain hospital wards, on airplanes or indeed (and for a slightly different reason) in the car while driving. They do not, however, pose any threat to those of us filling our car with petrol.

Robert Renkes from the Petroleum Equipment Institute has carried out significant research on this matter and despite being quoted as the origin of this myth, has categorically denied, in interviews and on paper, that mobile phones are the cause of forecourt fires. In fact, worldwide, there has never, ever, been a forecourt fire attributed to the mobile phone.

1This type of fire is much more likely to happen in the USA because the pump can be set to fill leaving the purchaser free to do other things.2The possible exception to this rule is http://en.wikipedia.org/wiki/Dom_JollyDom Joly's big mobile, which wasn't included in the tests, and may or may not create a massive spark.