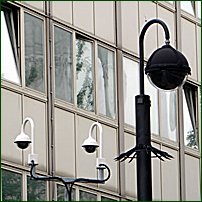 The UK has more closed-circuit television (CCTV) cameras than any other country in Europe - upwards of a million, with some estimating twice this number. Many of these are connected only to video-tape recorders and/or watched by humans in carefully-operated control rooms, and are viewed only if there's a reason.

A US company called Visionics is selling a system called FaceIt, which can match faces on a camera with those on a watch-list. The system alerts a human operator when it spots a probable match, allowing one person to 'watch' many cameras. The system has been used by the London borough of Newham since 1998, which says it has lowered crime as a result. It's been used to spot football hooligans at a West Ham match and tested at Stansted airport. In April, Visionics announced that Birmingham city council is installing FaceIt on its city centre cameras.

Electronic cameras are also increasingly used for car number-plate recognition. These read plates, and alert an operator if the vehicle is on a watch-list (eg, has it been involved in a crime). The City of London police installed these in 1997 on all entrances to the City to combat terrorism, and other forces including the Metropolitan Police in London and the West Midlands squad have also bought systems. Northampton also has such equipment.

There are also privately-owned camera systems that read number-plates. A firm called Trafficmaster owns 8000 cameras that partially read number plates, although this is meant to monitor traffic flow rather than track people.

However, there are plans for several 'non-criminal' systems that will read whole number plates and look up the owner's details. Ken Livingstone's plans for charging vehicles for entry to central London rely on plate readers. Also, there are several schemes nationwide to replace camera-film speed cameras with electronic versions, catching drivers as they go. In both cases, a central system would know exactly where you were, the moment you passed a camera.

Does it matter? As with all privacy issues, there is an argument saying that only criminals need to fear systems that monitor location - even if they are capable of being extended cheaply to cover the whole population.
Some say cameras make them feel safer. However, the jury is out on whether such systems actually reduce crime; several academic experts say that, although crime my be reduced in the necessarily small areas covered by the cameras, it is displaced elsewhere. The government, however, has few doubts, and on 21 August, 2001, it announced £79 million of state spending on more CCTV systems.

The counter-argument is: do you want someone you don't know to know where you are all the times? Do you trust these organisations never to misuse this information? Basically, do you think you should have secrets and privacy?