The Big Duck, Flanders, Long Island, New York, USA Content from the guide to life, the universe and everything 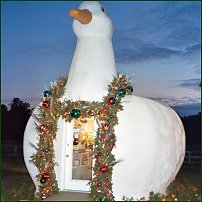 In 1931, Long Island's duck industry was booming. 25 Peking ducks had been imported from China in 1873. Nine survived the trip, and from this fledgling start, approximately six million ducklings were being produced by 1931 on 90-odd farms (then called ranches).

To stand out in this flock of ducks, Riverhead duck-farmer Martin Maurer got an idea. While holidaying in California, he stopped at a roadside shop shaped like a giant coffeepot. He thought this was a clever advertising gimmick, and imagined how he could do the same at home, but utilising a duck. When Maurer returned to Long Island, he hired a local carpenter named George Reeve, who in turn hired two stage show set designers to build the Duck. They used a cooked chicken carcass and a live duck tied with a string to a perch as models. Concrete applied over a wooden frame was used to build the Duck. The finishing touch was the eyes, which were the taillights of a Model T Ford, which would glow red at night when cars passed by.

The finished building weighed 16,500 pounds and was 20 feet tall, and 30 feet long, with a full-sized door set into its chest, and a shop in its belly. Maurer set up shop in the Big Duck, selling ducks and eggs on Main Street in Riverhead in Suffolk County on the East End of Long Island. When it first opened, the Big Duck was a big hit. It was pictured in Popular Mechanics magazine, and the Atlas Cement Co, whose product was used in its construction, put the Big Duck in its annual calendar and declared it 'The Most Spectacular Piece of Cement Work in 1931'. Maurer had his giant duck and business trademarked as The Big Duck Ranch.

In 1936, the Big Duck was moved about four miles east to Flanders Road. For the next 50 years, the duck was used for its original purpose of selling duck farm produce. By 1969 Suffolk County was producing 60% of the USA's ducks. Today that figure has dropped below 15% due to escalating land values, increased production costs, and environmental concerns. Somewhere along the line, the Big Duck stopped being used to sell ducks as demand dropped.

The Big Duck lent its name to a style of roadside architecture. The architectural term duck was coined in 1968. Decorated sheds are plain buildings with added signage that reveals its functions. Duck buildings themselves serve as the signage, in effect, a large, three-dimensional advertisement. They are designed to draw in passing motorists, enticing them to enter and ultimately make a purchase. Ducks are fantastical, while retaining their purely practical purposes. The Big Duck thus became one of the most famous examples of roadside architecture.

In 1987, Kia and Pouran Eshghi, the owners of the land the Big Duck stood on, were planning to sell the land to developers. The Friends for Long Island's Heritage and other Big Duck preservationists campaigned to save the Duck. The owners decided to donate the Big Duck to Suffolk County. In December of that year, the Big Duck was moved to the entrance of Sears Bellows County Park in Flanders. By that time, the Big Duck was listed in the National Register of Historic Places, so when attempts were made to return it to its former glory in the early 1990s, it had to be reconstructed in a way that was faithful to its original design. For example, during renovation, restorers had to put down tongue-and-groove pine flooring and had to recreate the tin walls that originally were inside the store.

In 1995 the Big Duck reopened as a small museum exhibiting duck, highway and roadside architecture history as well as Long Island's age of early motoring. It also serves as a gift shop selling 'duck-a-bilia' and other Long Island specialities. Volunteers man the counter in the Big Duck, which also serves as a tourist information centre for the Long Island Convention and Visitors Bureau.

Deck the Duck with Boughs of Holly

The Big Duck rivals the tree at Rockefeller Center when the holiday season rolls around. Each year, on the first Wednesday in December, people gather in Sears Bellows Park from around the Island. Duck carols are sung and warm refreshments are served while all await the arrival of Santa Claus riding atop a fire truck from the Flanders Fire Department. Once Santa arrives, the event all were waiting in the cold to observe finally occurs: the lighting of the Big Duck!

Many people ask the volunteers who work inside the Duck whether its a boy or a girl. By observing the way the Big Duck holds its tail, it's a boy, but most people refer to it as 'she'. This may partly have to do with the fact that at one time there was a large egg sitting right behind it. And at one time, you could tune in on the car radio as you approached the Big Duck to hear the voice of Christie Brinkley narrating Big Duck history as the Duck itself. Most definitely a female voice.