The London Congestion Charge Content from the guide to life, the universe and everything 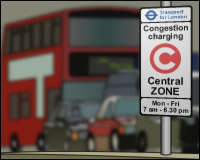 The Central London congestion charge started on 17 February, 2003. Introduced by Ken Livingstone, London's Mayor, the charge has been surrounded by controversy throughout, though from the start it's been viewed by many as a brave political move in the face of cynicism from both the Labour government and many dispersed special interest groups, all of whom were circling in preparation to undermine the mayor and the London Assembly at any sign of failure.

The reason for the charge, not surprisingly, is twofold - to reduce the frustration, jams, accidents and delays caused by the sheer weight of traffic in central London, and to raise cash which can then be spent on improving current public transport.

Initial news reports about the impact of the charge on car numbers showed a rapid drop in traffic (some reported up to 38% less chargeable traffic on the roads in the first week - which was also a school holiday, it must be noted). Since then the traffic seems to have settled at between 10-20% less traffic within the charging zone, but with various other side effects, not all of which were adequately predicted, such as:

The general consensus though is that it has been a success, and therefore many other large cities worldwide are now in the process of investigating similar schemes.

Within a set zone covering most of central London - see the Congestion Charge website for a map of the zone - there is a charge for each vehicle, every day it is driven within the zone. It is payable once for each day, which allows for multiple entries and exits. From Summer 2005, this charge was increased to £8.

Congestion charging operates between the hours of 7am - 6.30pm Monday to Friday (excluding bank holidays and some other 'free' days set by Transport for London). The fee is payable up to 90 days in advance for a single day or period of time. It can also be paid before 10pm during the day itself. If it is paid after 10pm, the fee rises slightly until midnight. After midnight, a penalty charge applies (see below). Payment can be made at shops with the PayPoint logo, on the internet, on the phone or by post. You can also register for a Fast Track card, which stores the details of up to two vehicles you use regularly, and can be swiped at shops during payment, used to make SMS payments or quoted over the phone. It can also be used (if you wish) to store your preferred payment method and therefore would only have to quote your PIN to make a payment.

The registration number of any vehicle entering the congestion charging zone within the charging times will be recorded by roadside cameras1 and checked against a database of those who have paid. If you fail to pay the charge by midnight, a penalty charge notice will be issued to the registered owner of the vehicle, similar to that used for parking and bus lane violations. Full details of charges and penalties can be found on the Congestion Charge website.

How to Avoid Paying the Charge:

Certain vehicles are exempt or discounted, as below:

Some discounts and exemptions apply automatically due to the type of vehicle or tax classification, some require registration and payment of a fee.

To pay the charge, full details of the discounts, or FAQs about the whole scheme, check out the Transport for London Congestion Charge website.

1There are unconfirmed rumours that up to 20% of number plates do not get recorded.