The Cerne Abbas Giant, Dorset, England Content from the guide to life, the universe and everything 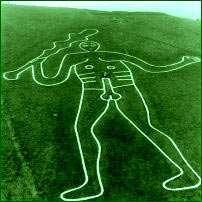 Overlooking the ancient village of Cerne Abbas, Dorset, UK, the Cerne Giant stands proud (in more ways than one) on the hillside. This chalk figure, depicting an aroused naked man wielding a club, is the largest chalk hill figure in Great Britain. The Giant is 180 feet high with an astounding 30-foot phallus. His club measures 120 feet in length.

He has brought notoriety and tourism to the village of Cerne Abbas; people have travelled from all over the world to see the figure, which is also known as 'The Rude Man'. The Giant is one of a number of ancient hill figures dotted around Britain. Others include the 'Long Man of Willmington' in Sussex and the 'White Horse of Uffington' in Oxfordshire. The Giant was created by digging a two-feet-wide trench into the underlying rock and filling it with chalk.

Below the left hand of the Giant is a mound; it is thought that the mound was part of the original figure, depicting a severed head. This is a common Celtic symbol and could date the Giant as far back as 180AD.

Many stories exist about who the Cerne Giant is meant to depict, but none have been proven. So for now the mystery and speculation remains. Unlike the White Horse of Uffington, no tests to determine the age of the Giant have been carried out so far.

The first written reference to the Giant was made by Dorset historian Rev John Hutchins, in his guide to Dorset in 1751. He claimed that it was cut by Lord Denzil Holles, who owned the hill from 1642 - 1666. Denzil opposed Oliver Cromwell's Puritanical rule and was said to have cut the Giant as a protest.

One story is that it depicts the Roman god Hercules, who is often represented wielding a club with an animal fur draped over one shoulder. Though there is no visible sign of a fur, at some point in time a carving of a fur may have been there; if so, it has long since grown over with grass.

Rodney Castleden, an archaeologist from the Roedean school in Brighton, carried out a study of the Giant. Using an electrical device which measures soil resistance, his tests showed a lot of soil disturbance under the Giant's left arm. This could indicate the presence of a cloak or animal skin carving.

The worship of Hercules was in vogue at the time of the Roman invasion and was amalgamated with the practices of a local Celtic tribe. The reigning Emperor at that time1, Emperor Commodus, believed he was the reincarnation of Hercules.

It is known that ancient Britons often went naked into battle. This is probably because they wore only a blanket over one shoulder and it could encumber them during conflict. There is much historical evidence from the Roman invasion of Britain of naked warriors carrying a club in one hand and a severed head in the other: this includes a coin minted during the reign of King Cymbeline.

The local tribe were the Durotriges, who occupied an area roughly the size of present-day Dorset. There is a well nearby, which the Celts considered holy, so the location of the Giant could indicate a guardian god, created to protect the holy well.

It is thought that the Giant originally had a navel. During Victorian times, the Giant's phallus was allowed to become discreetly veiled in shrubbery. When he was re-excavated, the navel was mistaken for the tip of the phallus, so the phallus was extended by nine feet.

Castleden believes that the phallus is not intended to be sign of fertility, more a symbol of good luck and prosperity, as figures with an erect phallus were often used for this reason during ancient times.

Another story is that some monks from a local monastery cut the stone giant as a prank on an abbot named Thomas Corton, the phallus representing his lustful antics. The Abbot was expelled from the monastery after allegations of malpractice and the monastery, established in the 6th Century, was dissolved.

In folklore tradition, it is suggested that the figure represents a Danish giant who led an invasion of England. The story goes that he fell asleep on the hillside and the villagers cut off his head, then drew around his body to show where he had met his doom.

The most common folklore tradition regarding the Giant is that he represents fertility; this tradition still stands today. It is thought that if couples spend a night making love inside the outline of the Giant's phallus, the couple will soon produce children - it is no longer permitted for couples to perform such acts on or around the Giant2. Also there were stories of unmarried women spending the night alone inside the outline of the Giant; this was meant to ensure future marriage.

Above and to the right of the Giant's head there is an earthwork known as the 'Trendle', or 'Frying Pan'. It is believed that a temple once stood there, though again there is no evidence to support the story. During the Middle Ages, a maypole was erected within the earthwork, where childless couples would dance to promote fertility.

During World War II, the Giant was covered up to prevent it being used as a landmark by German bombers; this was also done to other chalk hill figures. Soon after the war, he was restored to his former glory and once again could be seen glowing in the dark on a full moon. Since then the Giant has been re-chalked every 25 years.

The National Trust are conducting a wildlife survey around the Giant, to find out more about the flora and fauna that inhabit the area. The aim is to protect the land and the monument for future generations.

If you scaled down the Giant to an average six feet tall, his 'courting tackle' would still be a whopping 12 inches in length.

Postcards of the Cerne Abbas giant are the only images of a naked man cheerfully accepted by the British Post Office.
- Glyn Daniel, historian.

If you find yourself in Dorset and would like to visit the Giant, he can be found eight miles north of Dorchester on the A352 Sherbourne road, just to the north of Cerne Abbas. The Ordnance Survey map reference is ST666 017.