Oliver Cromwell - What's In A Name? Content from the guide to life, the universe and everything 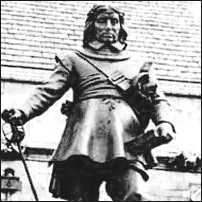 There is little question that the Cromwell family, which included the famous Oliver Cromwell, was very keen to establish their relationship to Thomas Cromwell, the first minister of King Henry VIII. This was achieved by discovering and exploiting the family's direct descent from Thomas Cromwell’s sister, Katherine. This Entry looks at Oliver's claim to fame, and how it was not quite as simple as it was made to appear.

The son of a blacksmith, Thomas Cromwell was born in 1485, in Putney, London. He went to Europe and became a soldier in the French Army, but after his return to London he became a lawyer and in 1523 he was elected a Member of Parliament. In 1530 he came to the notice of King Henry VIII, who employed Cromwell as an adviser. In 1535, Cromwell was appointed as Vicar-General1, and in 1540 Cromwell was appointed as the Earl of Essex. After this, things started to go wrong. Cromwell arranged the marriage of the King to Anne of Cleves, but the marriage proved a disaster and as a result of this and political intrigue, Thomas Cromwell was sent to the Tower of London, where he was executed on 28 July, 1540.

Oliver Cromwell was born to a relatively poor squire's family in Huntingdon in 1599. He was a keen student and was well-educated. In April 1628, at the age of 29, he was elected as MP for Huntingdon in the 'Short Parliament'. This lasted only until the following year, but Cromwell was also elected to the Long Parliament in August 1640, this time representing Cambridge.

He was a formidable general in the English Civil War, despite a lack of military experience or even training, and can be regarded as the founder of the modern British army. Known as 'Old Noll' by the Royalist forces, he raised a thousand-strong cavalry troop called 'Ironsides' using the men of the eastern counties. In 1650, Oliver Cromwell founded the Regiment of Cuirassiers using the 'Ironsides' as a foundation, with this regiment becoming the Earl of Oxford's Regiment during the reign of King Charles II2.

Cromwell supported the king's execution, and was even one of those who signed the order for the execution, thus becoming a regicide. After the death of King Charles I, he found himself elected Lord Protector of the Commonwealth: king in all but name.

Things are Not as They Appear

As stated before, Oliver's family were not directly descended from Thomas Cromwell, but from his sister Katherine3. This lady married a Morgan Williams, and thus the Cromwell family were not strictly Cromwells at all but, by the normal rules, Williams.

Morgan Williams started life as 'Lifas Morgan ap Williams', this being a traditional Welsh name given using a logical method, making it easy to identify the son of a father. Some names tended to change with each generation, unless a son was given the same name as his father. In this case, he would be known as Fychan or 'the younger.'

It is easy to see how a young Welshman and his family should wish to take advantage of the reputation of Thomas Cromwell, as attitudes to surnames were not the same then as today. The adoption of a the more celebrated name was open: the Williams arms were used by Morgan's descendants and the family continued to be listed as alias Williams for generations up to 1620, as can be seen by Oliver's own marriage contract.

Later, a Royalist kinsman who had considerable trouble gaining acceptance under the name of Cromwell wrote to Oliver complaining that now Oliver was a regicide4 he had made the name so odious it was time for him to change it back to Williams again. The eldest branch of this side of Cromwell's family did adopt the name Williams after the Restoration. Upon the Restoration of the Monarchy, Cromwell was vilified as a regicide and suffered post-mortem decapitation for his crime.

The name Cromwell originally came from Nottinghamshire and meant a winding stream from the old English crum for crooked,

Much ill cometh of a small note
as a Crumb Well set in a man's throat.

So went the Tudor prophecy which would malign Thomas Cromwell. Fate had revenge on a family that adopted the name for opportunist reasons, and what had started as a way to gain improved social standing had, within a generation, had the opposite effect on a family that still endures today.

1Under canon law, the diocesan bishop freely appoints the Vicar-General, who serves as his closest adviser and chief administrator. The position is held by a priest. The office of the Vicar-General has the power in the diocese to oversee church law, and the holder of the position normally has expertise in canon law or theology.2They are still a regiment in the British Army today, now called Royal Horse Guards (The Blues) - in a way the 'Ironsides' are still here.3A detailed family tree, the Llyfr Bagian or 'book of Bagian', had been set out between 1600 and 1607 by John Williams of Monmouthshire. Oliver was a baby at the time, and nobody had any interest in claiming descent.4A regicide is someone who kills a king or queen.