'Flake' - the Chocolate Bar Content from the guide to life, the universe and everything 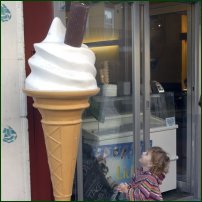 Only the crumbliest, flakiest chocolate, tastes like chocolate never tasted before

Cadbury1 was founded by John Cadbury, a Quaker who opened a grocery shop in Bull Street, Birmingham, UK, in 1824. The shop would become the foundation of Cadbury Limited, and within seven years he had changed it from a grocery shop to a centre for manufacturing drinking chocolate and cocoa.

Cadbury launched their Flake bar in 1920. The Flake was inspired by a Cadbury employee who noticed that when the chocolate moulds over-spilled, the excess chocolate would fold down in a stream, and the cooled stream of chocolate had many thin layers with a crumbly flakey texture.

The original Flake consists of 15cm (six inches) of log-like flakey, crumbly chocolate wrapped in a bright yellow plastic wrapper, which is twist-sealed at each end - the original Flake is the only one sealed in this way. The Flake is also available in 'fun size' packs.

In 1930, Cadbury began to produce boxes of loose half-length Flakes that could be distributed to ice cream vendors. The idea was that the Flake could be placed at around a 45-degree angle in the top of an ice-cream cone, and this arrangement has since become well-known as the 99 ice cream. Although there have been various claims as to where the name 99 originated, its origin remains unknown, and some vendors now refer to it incorrectly as the '99 with Flake'.

The first television advert for Flake was televised in 1959, and the last one in 1999. Numerous others were made during those 40 years, including adverts for the cinema as well as television. The 'Flake Girl' adverts are among the most memorable of all time. Although the early ones were in black and white, with the advertising slogan: Sixpence-worth of Heaven, and wouldn't raise an eyebrow today, in the 1950s and 60s they were said to be the sexiest sights on TV.

What made them memorable were the seductive undertones of the Flake Girls as they first slowly unwrapped, then put the Flake into their mouth, and nibbled or bit a piece off of it, catching any falling pieces of chocolate with a well-manicured finger or two, which was often followed by a climatic explosion of water, such a waterfall or the popping of a bottle of champagne, combined with the background music, relaxing scenes and atmosphere.

There was sometimes controversy surrounding the adverts. In the 1970s, one of them was taken off air amid complaints of the seductive way the Flake Girl bit the Flake. Another one had to be re-shot following complaints at the way the Flake was licked, before being nibbled.

Various adverts also appeared in UK magazines and newspapers; it was in 1976 that the words 'The crumbliest, flakiest chocolate' first appeared on the pages. It can be reasonably assumed that this was also about the same time of the introduction of the television advert jingle 'Only the crumbliest, flakiest chocolate, tastes like chocolate never tasted before', which was written by Ronnie Bond, at one time a prolific jingle writer. Various session singers sang it over the years, with the exception of Flake's 30th anniversary advert, when singer Kirsty Hawkshaw was commissioned to perform the jingle.

In 1999, the 40th anniversary advertising campaign signified a new era in Flake advertising, and an end of the Flake Girls as we knew them. Various clips from previous Flake Girl adverts were incorporated into the new-style adverts. This included a double entendre using the number 99, which referred to both the 99 Flake and the year 1999.

The new Flake advert campaign was part of Cadbury's 'Your Happiness Loves Cadbury', which included the use of life size animal puppets, such as a puma or a hyena, wearing a tiara or a collar with the word 'Happiness' encouraging the consumption of one of several confectionery products. That campaign has also come to an end, being replaced by the latest advertising slogan, which in 2006 was 'First taste, first love'.

There have been numerous parodies of the Flake, its suggestiveness and its adverts, with the following including just two of them. One was in the comedy Birds of a Feather. Dorien, a character portrayed as a 'man eater' was a visitor at a men's prison, as she got out a Flake, and in the style of the advert, she opened and nibbled it; the visiting room went silent, as all the men stopped talking to their visitors and watched Dorien.

Comedian Jasper Carrott had a sketch, on his Canned Carrott show, imitating a Flake advert where a Flake is consumed while relaxing in the bath. In Carrott's spoof version a woman is in a bath, eating a Flake, the water is over-flowing from the bath, Carrott, dressed in a scuba outfit, emerges from the plug end of the bath waving a handful of Flake wrappers.

In 2000 the Snow Flake was launched, this being a 12.5cm (five-inch) version of white-chocolate flake wrapped in a milk chocolate coating.

Controversy followed the launch when the 'official' wedding photo of newlywed television presenter Anthea Turner and millionaire businessman Grant Bovey showed them eating a Snow Flake. The photo was released by OK! magazine, who had exclusive rights to the wedding2. It was offered to the UK media with the following caption 'ANTHEA TURNER AND GRANT BOVEY exclusive OK! wedding photograph, enjoying Cadbury's new Snowflake. For the complete wedding coverage and a free Cadbury's Snowflake, buy OK! magazine this weekend.' Only one tabloid took up the offer, using the headline 'Sickener'.

During 2003 to 2004 Cadbury launched three more Flake-related products. The first, in 2003, was the Dipped Flake, which like the Snow Flake is only 12.5cm long. The Dipped is wrapped in a coating of milk chocolate, which holds the Flake firmly together, making it less crumbly and easier to eat.

The next product variation appeared in September 2004, when Flake Moments were launched. This was a boxed selection, with two layers, each containing 11 milk and white miniature Flakes, with added garnishes. The Moments chocolates have various names such as Reflection, Delight, Heaven and Obsession. The following month the Flake Praline was launched: a 12.5cm Flake partially covered in hazelnut Praline; a thin chocolate covering mixed with crushed hazelnuts.

Cadbury plan to release a dark chocolate version in autumn 2006 as their latest edition to the Flake brand - Dark Flake.

Among the Flake ice creams available is the 500ml tub of soft vanilla ice-cream, scattered with small pieces of flake. Based upon the original Flake 99 ice cream, these come with a biscuity wafer cone and vanilla ice cream with a 99 Flake placed in the top, amid small curls of milk chocolate. The ice-creams come in packs of four, and are available in vanilla and strawberry varieties.

The uses of Flake on cake, particularly chocolate cakes are numerous. Cut into pieces, or crumbled, they can add extra sweetness and texture to a basic sponge cake, or an elaborate celebration cake, garnish on a trifle, or a topping for hot chocolate or cappuccino.

Cadbury also produce various chocolate cakes and desserts with Flake topping. Some of these are seasonal, such as Flake chocolate logs.

1Now known as Cadbury Schweppes.2Guest invitations included the blunt request 'Please do not bring personal cameras as OK! Magazine will be covering the event.'