Fun-sized Sweets and Chocolate Bars Content from the guide to life, the universe and everything 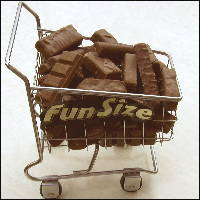 The concept of a fun-sized sweet has been in existence for a while now. It has been the subject of much confusion to those who stop and observe the blatantly obvious - that a fun-sized sweet is actually smaller than the regular size. It seems as though there was a mix up some time ago on the meaning of fun. Fun is meant to imply a good time. A smaller sweet, in the general opinion, is not more fun than the normal size, or even the 'king' size.

A Conspiracy of Confectioners?

Maybe not, although it does seem odd that the conglomerate sweet and chocolate producers would choose to appeal only to those with dieting issues when naming the fun-sized sweets. Whatever the reason for the name, it appears to be another attempt to fool the overly gullible public into believing that fun is not, as claimed by the Merriam-Webster dictionary, 'what provides amusement or enjoyment'; but instead, 'what provides neither fun nor amusement, but which is to be considered fun anyway'.

Consider the fun-sized Twix chocolate bar. In the normal-sized package there reside two fingers, whereas in the fun-sized version there appears to be only one. That is of course unless they chose to shrink the second bar to an infinitesimal size in order to greatly increase its fun to the point where one can't open the package without simply gurgling with pleasure out of how much fun they're having.

Another example in the trend towards the miniature are the fun-sized and mini-sized M&Ms. The normal size package is about two and-a-half times bigger than the fun-sized version. If this wasn't bad enough, the M&M minis came along. Each piece of the mini-sized chocolate is a fraction of the normal size, with a diminished chocolate-to-sugar-coating ratio.

The idea of manufacturing miniature versions of chocolates probably came about from researching parties. It was most likely deduced that normal-sized bars are too big to be served at parties. So, the size of the sweets and chocolate bars was reduced so that more could fit into a serving bowl. This is an elaborate scheme to fool partygoers. By reducing the size of the sweets in the bowl, more can be snatched in one fell swipe than if they were normal-sized. But really, how much of a difference does an inch or so make when you go to grab a bar from a bowl? Just how many more can one hold as a result of their reduced size?

Other Sizes and Oddities

The Hulk-sized sweet has taken many forms. Rice Krispies once produced a two foot long, green Rice Krispies treat. Kit Kat also wanted to call their 'Big Kat' the Hulk bar. The Big Kat has been described as having about three times the chocolate coating of the normal wafer.

This one should be familiar. The King Size was the original monster treat.

Obviously this is a last-ditch effort to clear up the whole business about the 'Fun' size. Too bad it simply added to the general confusion in that, if the original fun size was smaller than normal, the Super Fun size should be much smaller. The Super Fun size is in fact much bigger.

The best-known sweet to use this size is M&Ms. They were extremely small, and came packaged in a cylindrical container.

So What is the Fun Size Good for?