'The Gruffalo' and 'The Gruffalo's Child' - Children's Stories Content from the guide to life, the universe and everything 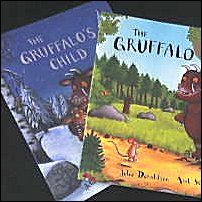 The Gruffalo and The Gruffalo's Child are both highly successful children's stories, written by Julia Donaldson and illustrated by Axel Scheffler. The first, The Gruffalo, was initially published in 1999 in the UK by Macmillan Children's Books as a 32-page A5 boardbook, and was intended for young readers aged from three years, although children of all ages (including babies) enjoyed the colourful story and pictures. The Gruffalo's Child soon followed after the success of the first story and both tales are written in rhyming couplets, with the same pattern repeated several times and a few words changing as the story progresses. A lovely mix of adventure, friendliness and fear, with a wonderful melodic quality the books are fantastic and engrossing. They are also perfect for reading aloud at bedtime, silly voices and all!

A Gruffalo is quite a fearsome creature. About the size of a large bear and covered in rough brown fur, it stands upon its hind legs and stalks the deep forest searching for food, especially mice as they:

...taste good on a slice of bread!

As the fables go, Gruffalo is very distinctive. It has terrible tusks, claws and teeth, knobbly knees, turned-out toes, big orange eyes, a black tongue, purple prickles all over its back and each Gruffalo has a poisonous wart on the end of its nose. Not something to run into when out for a stroll in the woods! Julia Donaldson's telling of this wonderful new mythical beast's adventures (or modern fairy stories), is beautifully illustrated, with a happy family feel.

A mouse took a stroll through the deep, dark wood.

This story tells the tale of a mouse who goes walking in the wood one day, and bumps into some nefarious characters who would like to invite her for dinner - with the idea that she's the main course! She is able to stave off a fox, an owl and a snake by telling of this terrifying creature she is going to have tea with - a Gruffalo. Of course she is most surprised when an actual Gruffalo appears on the scene, but quick-thinking puts the mouse in the driving seat. This 'Big Bad Mouse' finishes her walk in the wood with the Gruffalo and her new 'friends' safely rounding off the day with a nice wholesome nut for dinner.

The Gruffalo's child is bored, so instead of heeding the words of her father, she goes out into the snowy wood looking for the terrible 'Big Bad Mouse'. She bumps into a fox, an owl and a snake before running into the path of a little mouse and her friend - the Big Bad Mouse! But fear not - the story ends happily with the Gruffalo's child no longer bored and back safely in her cave with her dad.

The Gruffalo was the UK's bestselling picture book of the year 2000 and has gone on to sell over one million copies in 31 editions worldwide - including German (Der Grüffelo), Italian (A spasso col mostro) and even Hebrew (Trofoti) translations. The audio book version (a CD within the paperback picture book) narrated by Imelda Staunton, was released in 2002, and a jigsaw book version was published in 2004. The book has also been packaged with a Gruffalo plush toy that is about 8" in height, complete with purple prickles and a wart on the end of its nose. The Gruffalo Song, sung by the author, was immediately infectious with fans of the books and was later released with the book, audio book, as a standalone CD single, and on a musical CD with other songs from Julia Donaldson's tales. Within the stories themselves, Axel Scheffler's art introduces other different animals and objects to find within the pages, and a simple but unique style that brings the reader back time and time again.

The Gruffalo won the Gold Award (in the 0 to 5 years category) in the 1999 Nestlé Smarties Book Prizes, the 2000 Nottingham/Experian Children's Book Award and the Blue Peter Best Book To Read Aloud Award1. The Gruffalo's Child won the Best Children's Book Award at the 2005 British Book Awards. But further proof of the terrific art and stories is that the books are used in nurseries, schools, play groups and even hospitals to not only encourage children to read and enjoy books, but to bring a great amount of joy!

Amazingly, The Gruffalo was also made into a very successful 50-minute musical stage play by the Tall Stories theatre company. Opening at the Criterion Theatre in London's West End in July 2005 the play toured the UK, including a stint at London's Royal National Theatre, before moving to venues in New York City (Broadway) and Warsaw. The Gruffalo's Child, another 50-minute stage play, followed suit premiering at the Polka Theatre, Wimbledon in October 2005 and was just as popular as its predecessor with both adults and children loving the interpretation of the firm family favourite.

Further Gruffalo fun and games can be found at the Gruffalo website, or if you like the Gruffalo stories you could try some of Julia Donaldson and Axel Sheffler's other collaborative efforts - available in any good library or bookshop.