Gumbys - The Monty Python Characters Content from the guide to life, the universe and everything 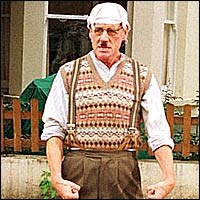 No, they're not the little green cartoon characters made from clay. Gumbys1 are characters that were frequently featured in various sketches from the 1970s television show Monty Python's Flying Circus.

Gumbys are extremely dim-witted, loud, sometimes violent men that are all uniform in appearance, mannerisms and speech. They are called 'Gumbys' because 'Gumby' is their surname, after two initials of unspecified meaning, such as RI Gumby, DP Gumby etc.

'I would like to see John the Baptist's impersonation of Graham Hill!'

Lastly, their most defining and famous article of clothing: a hat made from a white handkerchief, with the four corners knotted. The unofficial term for this is 'Sidcup'. This term was coined in Douglas Adams's and John Lloyd's dictionary of words for things there are not yet words for, The Meaning of Liff (1983).

Sidcup (n.)
One of those hats made from tying knots in the corners of a handkerchief

Gumbys usually stand with their knees bent, legs spread apart, slouching, with their hands in loose fists hanging down near their thighs or pelvic area. They speak in a loud, low, slightly slurred voice. The Gumbys also enjoy banging two bricks together, sometimes while their head is between them.

'I would like to meet someone with superior intelligence.'

They were quite surprised by the positive reaction to the Gumbys, these daft people with handkerchiefs tied on their heads. When they walked into the studio one time what happens but the whole front row of the audience had handkerchiefs tied around their heads! Gumby just had to appear and there was a roar of laughter.
- Ian MacNaughton, Python friend and colleague, in an interview in the book Monty Python Speaks! by David Morgan, 1999.

One of the first sketches in which a Gumby appears was the Gumby Crooning sketch, from the first series. In this, Graham Chapman croons while hitting his head with bricks. Probably the most famous sketch however, is the Gumby Brain Specialist, which gave birth to the classic Python quote: 'My brain hurts!'

Other sketches featuring Gumbys include Gumby Flower Arranging, Historical Impersonations, and the voice of a Gumby was heard in a trailer for the movie Monty Python and the Holy Grail. In the first Python movie, And Now For Something Completely Different a Gumby was blown up in the How Not To Be Seen sketch. This was also in the television series.

During track 14, 'The Intermission' on the soundtrack of Monty Python's Spamalot, you can hear a Gumby saying 'An...Inter...Mission...' over the sound of organ playing similar to that at the end of Monty Python and the Holy Grail.

Though all of the Pythons played Gumbys at some point during the series, it is usually Michael Palin who is remembered in the role. In a 1999 reunion, the Pythons4 dressed as Gumbys. However, Eric Idle was not present at that event and therefore Eddie Izzard filled in for him.