National Rail Terminals in Central London - Part 2 - South Content from the guide to life, the universe and everything 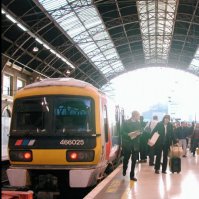 Whereas each station serving the area north of the Thames serves a specific set of routes, most of the stations in the southern region serve the same maze of lines in south London, Kent, Sussex and Surrey.

Two of the stations, Waterloo and London Bridge, are south of the Thames. Victoria, Charing Cross, Blackfriars and Cannon Street are north of the river1. These are listed clockwise, starting from Victoria.

Victoria Station is the busiest and one of the largest of the London terminals. It was built by an alliance of four rail companies to take over from a station in Battersea that was serving the line to the Great Exhibition site at Crystal Palace. The station was built in two parts over the basin of the former Grosvenor Canal, opening in 1862.

The western side of the station was run by the London, Brighton and South Coast Railways. London Chatham and Dover, with the help of Great Western, did the other half. With the exception of Paddington, Victoria was the only London terminal to be built for broad-gauge trains.

The Kent side of the station was rebuilt in 1908, and the Brighton side a year later.

The wall dividing the stations was taken down in 1924. However, the unofficial split remains to this day, with the western section of the station serving the southern region to South London, Brighton, Sussex and the south coast. South-eastern services to southeast London and Kent run from the eastern section. Victoria is currently home to the Gatwick Express service. Aside from a local service to London Bridge, all Victoria lines go through Clapham Junction, where they cross the lines coming from Waterloo.

The IRA set off a bomb in the station in 1991, killing one person and injuring many others.

Victoria's transport links are excellent. It has a bus station and Victoria Coach station is also nearby. Three Underground lines serve the station: the Circle, District and Victoria Lines.

It is easy to say that there is no station closer to Central London than Charing Cross, as road distances to London are all measured from outside the station. Sitting on The Stand, it is a short walk from Trafalgar Square, the National Gallery, Admiralty Arch, Whitehall and the Mall.

The station was opened by the Southeastern Railway on 11 January, 1864 with a John Hawkshaw single-span roof. The station was so short of space that the six platforms stretched out onto Hungerford Bridge. While the Victorian frontage remains, most of the rest of the station building is covered by Embankment Place, a 1990s office complex.

Southeastern trains serve the same destinations as they do from Victoria, as well as routes via New Cross, Deptford and Greenwich. Likewise, Southern serves the same routes as Victoria; in addition, it serves trains through Dulwich and Herne Hill.

The station ultimately derives its name from the stone cross that was placed here in 1291 to mark the last resting place of the funeral procession of Queen Eleanor, wife of Edward I. The village of Cyrringe (meaning turn, relating to the bend in the Thames) existed in around 1000, so the cross became known as the stone cross of Cherryngge. This evolved into Charing Cross.

As long as I gaze on Waterloo sunset, I am in paradise.
— The Kinks, 'Waterloo Sunset'

Waterloo has the most platforms of any of the London terminals, with 19 National Rail platforms, as well as five for Eurostar and four at Waterloo East.

The original station was built in 1848 by London and Southwestern as a through station. However, plans to run trains into the City were never realised. Lack of maintenance took its toll on the station and it was knocked down at the turn of the 20th Century. The new station, which grew to have a 800ft (240m) concourse and 21 platforms, took 22 years to complete. The current station, along with the International extension, covers 30.5 acres (12.3ha).

Waterloo is the terminus for Southwest Trains and serves, as the name suggests, south-west England. All its trains go via Clapham Junction. Destinations include Guilford, Portsmouth, Southampton, Weymouth and Reading. It also serves suburban destinations in Surrey and West London, including Hampton Court, Richmond, Epsom, Windsor and Eton. A number of Waterloo's lines head north of the River Thames to places like Twickenham, Hounslow and Brentford.

The clock at Waterloo station is well known as a meeting place for people going on blind dates. Terry and Julie were two lovers who Ray Davis painted into his portrait of an English romance in The Kinks' song 'Waterloo Sunset'. Ray Davis also wrote a movie called Return to Waterloo. Sir Bob Geldof made 'Love Like a Rocket' as a follow-up.

The station is one of the two terminals that sit south of the River Thames. It sits on the corner of Waterloo Road and York Road, slap-bang in the centre of the South Bank, near the National Theatre and Royal Festival Hall. County Hall with the London Aquarium, FA Premier League Hall of Fame and London Eye are also nearby. Walking across Westminster Bridge, you can get to the Houses of Parliament and Westminster Abbey. St Thomas's Hospital2 and Lambeth Palace are just south of the station. It gets its name from the bridge that was built to commemorate the victory over Napoleon.

Waterloo is on four tube lines of which two, the Bakerloo and the Waterloo & City, are named after the station. The other two are the Jubilee and the Northern (Charing Cross Branch).

To avoid confusion, the platforms are called A, B, C and D and serve Southern and Southeastern trains to Sussex and Kent. Southwark station on the Jubilee Line is a short walk from Waterloo East.

Next to Waterloo East is Windmill Walk, the bridge here is where the Dalek battle from Doctor Who episode 'Rememberance of the Daleks' took place.

Until the opening of the route into St Pancras via Stratford, Waterloo International is the terminus for Eurostar trains to Brussels and Paris. The name of the station has infuriated the French and confused the Belgians. The French were obviously not amused that the station bears the name of one of their greatest defeats. It is not unknown for Belgian passengers trying to get to the town after which the battle was named to not twig when paying a large fare and being asked to show their passport that the train was not a local service.

The station was designed by Nicholas Grimshaw and the 400-metre-long roof was the work of Anthony Hunt Associates. It was opened in 1994 and is now facing the end of its international life. Plans were put forward to use it as a terminal for the long-distance trains to Weymouth; however, they would mean extensive redesigning of the lines into the station. Other options include making it into offices or a shopping centre.

The current station acts as a terminus for south-eastern train services through London Bridge to Orpington. It also serves Thameslink trains to South London, Brighton and Bedford.

Blackfriars Underground station serves the District and Circle lines. There are a large number of different entrances onto nearby roads, linked by a rather grotty tunnel complex.

It is just off New Bridge Street, at the edge of the City of London. The Tate Modern is just across the River. HMS President, the Inns of Court and the Royal Courts of Justice are to the west. St Paul's and the Old Bailey are also nearby.

Holborn Viaduct was one of a number of stations on the London, Chatham and Dover Railway north of Blackfriars. Over the years, the station has had two levels of tracks, one above the other. After the main station was closed and demolished, the lower level was used for Thameslink trains between Farringdon and Blackfriars. A new station re-opened as St Paul's Thameslink, in the same place as the former Holborn Viaduct station. St Paul's Thameslink was renamed City Thameslink, to avoid confusion with the nearby Central Line station.

Cannon Street is one of the only two southern terminals to be in the City of London. It was opened by the Southeastern Railway in 1866. Most of the old buildings have vanished under a refurbishment and new office blocks. Originally the terminal featured a 700-feet-long train shed designed by (guess who?) Sir John Hawkshaw and a hotel frontage designed by EM Barry.

The street outside was home to many candlemakers and was originally known as Candelwichstrete before succumbing to the Cockney dialect. Samuel Pepys recorded the result of the local pronunciation as 'Cannon Street'.

With just over a million passengers a year, Cannon Street is one of the least busy of the London terminals.

Cannon Street is on the Circle and District Underground lines. Bank, Monument and Mansion House stations are all short walks away.

London Bridge Station is one of the busiest in London. As well as being a through station on the Southern, Thameslink and Southeastern lines, it is also a major terminus.

The original station was opened in 1836 by the London and Greenwich Railway. The London and Croydon Railway opened their station next door in 1839. Both were knocked down and rebuilt three times over the next four decades. A joint station only lasted from 1844 - 1850, before two new stations were opened up. Southeastern Railways, who had taken over from London and Greenwich, knocked down their platforms again in 1864 and built the new high-level through platforms to link up with their lines to Cannon Street and Charing Cross. London and Croydon became London, Brighton and the South Coast. They rebuilt their bit of the station in 1853, extending it in 1866. Sir John Hawkshaw, who obviously had the monopoly on roofs, was called in to design a new single-span roof3.

Much of the station that is now visible is the result of a 1978 redevelopment by British Rail.

London Bridge is well-known as a bottleneck in the Southern Region. All the trains from Cannon Street and Charing Cross, as well as some Thameslink trains, have to squeeze through the six through platforms. The nine bay platforms serve destinations, mainly on Southern trains, to South London and the South Coast. London Bridge operates the only terminal-to-terminal service in London, a Southern Region service through Peckham and Clapham High Street to Victoria.

The station is served by two Underground lines, the Northern (Bank Branch) and the Jubilee.

1Though the platforms of the latter three are on bridges that reach over the river.2Ray Davies was confined here for treatment and had a view over the river and Waterloo Bridge.3Hawkshaw obviously applied an 'if it ain't broke, don't fix it' approach to the design!