Earthbuilding - Building Using Natural Materials Content from the guide to life, the universe and everything 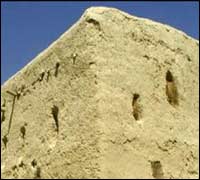 Man has always had a strong nesting instinct and, until relatively recently, the majority of people had to create their own homes. Professional builders only constructed churches, big public buildings, castles and mansions.

We have increasingly bought ready-made, off-the-peg houses, but the growth of the owner-builder movement has led to the rediscovery of the value of the use of natural resources, economic approaches, sustainability and self-help. What greater satisfaction can there be than to create your own nest?

Climate can determine the method most suitable for you. For example, you are unlikely to want to live in a bamboo house in a temperate climate, since big bamboo grows in the tropics and it also has next to no insulation. The most versatile material is strawbale, which can keep you warm in the cool and cool in the hot: its insulation qualities serve both equally well. As for wet weather, as long as your roof has large overhanging eaves and the walls are well-rendered and maintained, all materials will survive indefinitely.

A fifth of the world's homes are built from earth, mostly of pise (rammed earth) or adobe (mudbricks). In addition to these, there are several other methods of earth-building, as well as techniques that do not use mud, soil or clay. Most of the methods outlined have been in use for centuries and were precursors to today's bricks and concrete. Just because a building is constructed from natural materials does not mean there are any practical difficulties for the provision of electricity and plumbing. Usually a building permit or warrant from the local council will be required before the build starts. The design plan used to obtain the permit will include design of service provision. All the techniques that are described require solid footings and usually foundations, for which brick or concrete are the best materials.

Rammed earth or pise has been used all over the world in ancient and modern times. The great fortresses of the 10th Century in the Middle East are mostly of rammed earth construction and they stand remarkably unweathered today. Rammed earth is the best way of making walls from sandy soil by means of compression. Damp soil is packed solidly by ramming it into a strong rigid framework, or form, with vertical sides, placed in position over firm footings. It is made in courses: one section of wall at a time.

Some degree of carpentry skills are needed to build the formwork. The ramming itself is time-consuming and hard physical work, although mechanical rammers can be used. However, it is about twice as fast as mudbrick construction, partly because the wall is constructed in situ and partly because the earth is just damp and not sticky. Rammed earth will not shrink and develop cracks, although earth not sufficiently compacted will crumble away. It is possible to repair it, but it is best to avoid the problem in the first place. Ramming requires little water, which can be an important consideration in dry climates. On the other hand, ramming cannot be undertaken in wet weather, unless there is a roof already in place and the stockpile of earth is kept covered.

Mudbrick or adobe is a building material which consists of clay-loam soil puddled with water, sometimes containing straw. The ideal soil requires a clay content and the straw can be added to reduce drying and cracking. However, almost any soil can be adapted to make mudbricks; making it one of the most flexible and convenient building methods. It is most popular due to its simplicity, which is easily grasped by the layperson with limited experience, time or resources. If the design and construction are good, the building will last indefinitely.

There are several advantages to mudbrick building:

Of course there are also some disadvantages, too:

This is a building method used little today, due to the relatively temporary nature of the resulting walls. It was the traditional building technique used in Iron Age Europe. A timber frame is constructed, then infilled with a latticework of withies and twigs or bush (this is the wattle). The latticework is attached to the inside and to the outside of the frame and the space between is filled with mud and straw (sometimes wool, dung, animal skins in the past) for insulation. The surfaces are daubed with mud or manure and finally whitewashed or mud-screened.

Cob is enjoying a resurgence at the moment. It requires good quality clay, mixed with water and straw, to form a 'plastic' mixture. It is laid directly into light formworks on the wall - usually between a post and beam timber frame building - and allowed to dry thoroughly before the next layer is added. The drying period can take over a week, so the overall method is slow but straightforward - perhaps perfect for the weekend self-builder. It is worth erecting the roof before starting on the walls, to provide some protection from wet weather. Once the rough wall is complete, it is trimmed smooth and lintels and door cavities can be carved out. Cob can be loadbearing (ie can carry the roof itself, without timber supports) but it is more often used as an infill.

This construction technique has been pioneered in the USA and is now a worldwide method of building. It is mostly used as infill walling to a post and beam construction, but - like cob - it can be load-bearing. One advantage of using a post and beam framework is that the roof can be in place ahead of construction, during which the straw needs protection from wet weather. Bales can be simply stacked up and pinned against the plane of the timbers if it is to be infill. If it is loadbearing, the bales also need to be pinned into the footing. Once constructed, a chainsaw is used to cut out window and door cavities. Using chicken wire, bales are retained and provide reinforcement for the render coating. Two layers of render, in and out, will waterproof the walls. Strawbale building requires few specialist skills and is ideal for self-build. Energy efficiency is very high as the straw insulates well and the buildings can last indefinitely.

Timber is used in most post and beam structures and is the most often-used method to carry the weight of the roof of a building. The walls can then be infilled as desired with wood or another material. Threats of rising damp, woodworm and termites (depending upon the climate) need to be considered and prevented from the outset.

These use a fundamental building method: the design is usually based upon locally-available timber, with which roof supports are constructed and infilled with smaller timbers. Self-harvested, new, or recycled timber can be used: old telegraph poles seem to be particularly well-suited to polehouse construction. Wooden houses are most suited to a warm climate, unless considerable insulation is installed.

Bamboo is another building material best suited to warm climates - mainly because the large species used for construction only grow in the tropics and sub-tropics. It is extremely flammable, so extra care needs to be taken in building design to reduce the threat of fire. It is grown and used across Asia and often combined with other building materials and techniques, such as timber and adobe. Because bamboo is round and hollow and separated into culms, it is very strong and can support more weight than an equivalent length of wood. Its lightness makes it easy and fast to manhandle and place. It can also be cut and shaped more easily than wood. Bamboo grows fast and can be grown on a small scale by the builder. It is a fast and cheap option for long-lasting buildings. The disadvantages are that it is not weather-resistant unless treated (steaming and soaking in a copper solution is the norm) and the foot must be fixed in either dry soil or concrete to avoid rot.

These are most commonly used in temperate climates. Stone buildings will last longer than any other type. However, stone-walling is a slow process, requires skills and is usually physically demanding. Stones can be laid in regular courses, with mortar between them, or walls can be constructed using slipforms: formwork into which stones are placed and concrete mix is poured into fill it up. Once dry, the form is slipped off and moved onto the next course. Stone buildings tend to be cold, but insulation within the wall cavity or on the inside of the wall can reduce heat loss.

It is perhaps not surprising in these times of increased awareness of the impact that we have upon the earth, that there is a burgeoning desire and movement to construct our homes from materials that are from the earth; using methods that are simple, non-invasive and self-reliant. There are methods that suit every climate, every aspiration and every purse. They are all ancient methods, modified in the light of modern understanding of mechanics, engineering and safety. And what's more, in most western countries, the state will actually help you to build such a home.

Dream on and then act!