Tangram - the Chinese puzzle Content from the guide to life, the universe and everything 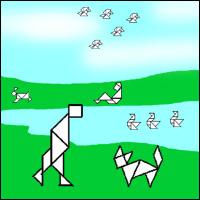 The tangram is a puzzle of Chinese origin, that consists of seven flat pieces (called tans): two large triangles, two small triangles, a medium triangle, a square and a parallelogram. You can put these seven tans together to make shapes of anything from cats, birds and kangaroos to boats, people and teapots. Though you must follow these rules:

You don't have to be particularly clever to play with tangrams. You can find pictures of shapes to follow, or you can try to figure out how to make a square, or a rectangle, or a triangle or parallelogram. It may not be as easy as it looks. But with some thought, and most important, patience, you will soon figure it out.

How to make your own tangram set

If you don't want to spend the money, or you can't find anywhere to buy a tangram set, the alternative is to make your own. It is fairly easy, though you must keep in mind that it must be precise, or else your tangram might not work as well. And you may want to practise the following instructions on a piece of paper first, just to get the hang of it. And for a visual aid, click here.

First, with some thin wood (or if you're really cheap, cardboard), cut out a perfect square. It can be any size you like.

Now, with a ruler and pencil, draw a line diagonally between two corners. Now draw another line, bisecting one of these pieces to form the two large triangles.

Next, with the other half, mark a point halfway along each of the two short sides, then join them with a line. Then you will have the medium triangle and a trapezium, needing further division. Draw a line bisecting remaining piece along the line of symmetry, (continuing the diagonal which divides the two large triangles) to make two pieces, each with two short sides, a medium side, and a long side. Divide one of these into a square, and a small triangle. Divide the other into an identical small triangle, thus leaving the parallelogram.

Then carefully cut the pieces with a saw, and sand or file off any rough edges, afterward. Though tangram is traditionally black, you can leave the pieces plain, or you can paint or varnish them as you like. Enjoy!

Brief history of the tangram

No one knows exactly when or how the tangram was invented. The earliest known writing of them was in 1813, but they are possibly older. It is possible that they were originally in invented as a game for women and children, so in those days, they would not be considered important or noteworthy.

In 1903, American puzzle expert Sam Loyd wrote The Eighth Book Of Tan. In this he told that the tangram was invented 4,000 years ago by the god, Tan.

According to the encyclopedia lore, the game of Tangrams is of very ancient origin, and has been played in China for upward of 4,000 years, somewhat in the nature of a national pastime... The seven books of Tan were supposed to illustrate the creation of the world and the origin of species upon a plan which out-Darwins Darwin, the progress of the human race being traced through seven stages of development upto a mysterious spiritual state which is too lunatic for serious consideration.

This was later discovered to be untrue, and that Loyd made it up as a practical joke. But the publication did provide over six hundred new shapes, much of them Loyd's own work.

Origins of the name

There has also been some debate over the origin of the name. Possibly derived from the word trangram meaning a puzzle or trinket. Or perhaps táng (the Chinese dynasty) and gram, Greek for 'writing'. Or táng tú. Tú meaning a picture or diagram.

When the tangram became popular in Europe and America in the 19th century, it was called 'The Chinese Puzzle Game'. But later in the century, the word tangram became well known.

Several other similar puzzles were manufactured by a German company, FA Richter. The Pythagoras was another seven piece square dissection, the Circle Puzzle was ten pieces made from a circle, and the Cross Breaker, a cross dissection which can also form a rectangle.

The tangram obtained admirers such as Edgar Allen Poe, Lewis Carroll, Thomas Edison, and Napoleon. They were also popular pastimes during World War I, in the trenches of both sides.

Massimo Morozzi, an Italian designer created the Tangram Table. It is essentially a larger counterpart of the regular tangram pieces. The Tangram Table is made of up the seven separate shapes, with specially designed legs that enable the tans to stand up. Then they can be arranged into the varied shapes possible as with the traditional tangram.