This proposal, for four half hour programmes, was submitted to
BBC Radio 4

From one extreme to another across the International Dateline from Alaska to Chukotka. For Richard Creasey it will be an extraordinary 60 mile journey from America’s Wild West to Russia’s Wild East.

EDITORIAL SYNOPSIS: This is a proposal which has evolved from the offer 360 - Changing the World by Degrees. The intention in this new proposal is to combine strong stories with a real sense of purpose. To this end we are offering four linked stories in a remote and intriguing part of the world where Richard Creasey can offer particular expertise. These four programmes investigate highly significant environmental issues on either side of the Bering Strait. Now that the nuclear warheads have gone from this international fault line, a new danger has emerged: the threat of mutually assured environmental destruction. Sometimes in the name of joint-ventures between the two nations, sometimes for profit, and sometimes simply for survival. 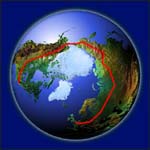 Prog One - Nuclear Barges
Richard begins in the warmth of an American home in the coastal town of Nome in Alaska. A picture is built up of how normal American life is maintained in this hostile environment and the huge infrastructure that this entails.


On the other side of the Bering Strait, on the same tundra and by the same sea, is the coastal town of Pevek. Like many other towns in the area the homes are in four-storey concrete blocks of tiny apartments built in Soviet times. The infrastructure has collapsed and there is virtually no power supply. The solution is simple, at least in engineering terms. The catastrophe it could cause, though, is terrifying. However you feel about it, it’s ingenious: take the reactors out of nuclear-powered icebreakers, put them in steel barges 160 metres long, float the barges in the bay at Pevek, and bring nuclear power to the area at the flick of a switch. Richard hears the official story from the Office of the Governor of the Chukotka Autonomous Region in Anadyr, and compares it to the what he finds in Pevek. Richard gives a vivid description of the place as he flies in over the barges. These nuclear pontoons may appall the comfortable residents of Nome, Alaska, but here the news of a winter with heat and light is welcomed.

Prog Two - Oil.
The Russian company Sibneft is the only petro-chemical firm to tentatively explore the possibility of extracting oil from Chukotka.

They have just begun work on three fields around Anadyr, the area’s main town. In August of this year the United States said it would help Russia fund the exploration of new giant oil provinces to “maintain Russia's impressive output growth and ensure stability on world oil markets”. Next summer Sibneft plans to scale up its drilling in Chukotka. And, conveniently, the environmental restrictions which are so rigorously adhered to in Alaska are either not in place at all on the Chukotkan side, or can sometimes be avoided with a little ‘negotiation’.

This programme looks at what has been left over both on land and in the sea.

In Alaska the countryside is scarred by hulks of iron left behind after the gold rush. In Chukotka there are the gulags - the nuclear mountains. But that is just the introduction to a story about today. In the ghost towns of Chukotka two thirds of the buildings are abandoned. Ruins for the remaining citizens to dodge. And there is toxic waste, oil from machinery all the debris that - at best in Chukotka - was chucked into a tidy pile. During the summer thaw it festors and seeps into the water and - presumably kills the animals, birds and fish that are scavenging for food.

Prog Four - The Diomedes
In the final programme Richard visits Russia and Alaska at their closest point.

Looking at each other from either side of the International Date Line, in the middle of the Bering Strait, are two islands: Little Diomedes (American) and Big Diomedes (Russian). Through the long winter it is possible to walk the few miles on the ice from one island to the other. Once, villagers did just that until the Soviets put a stop to it, and the situation remains unresolved today.


UNESCO have already agreed that Big Diomede would qualify for World Heritage Status if the Russians proposed the idea. The villagers from Chukotka would then return to their island. At the core of this programme would be the personal stories: of the American soldiers on Little Diomedes and the Russians on Big Diomedes, of the indigenous families in Chukotka and Little Diomedes who long to be reunited.

Go to the Contents page

Go to the BBC Radio 4 site