Charlotte, Emily and Anne Brontë found success as authors in their lifetimes, and their fame endured and increased after their untimely deaths. Their determination to write was fostered by their personal experiences and also by their family circumstances.

Originally from Ireland, their father Patrick Brontë was born on 17 March, 1777. He was known as Patrick Branty when he enrolled at St John's College, Cambridge in his mid-20s, but changed his name (perhaps being inspired by Horatio Nelson becoming Duke of Bronte1 in 1799). In 1812 he moved to the county of Yorkshire in England to work as a curate2.

His wife Maria Branwell was from Cornwall. She was born on 15 April, 1783. Maria met Patrick in 1812 when she was visiting her aunt and uncle in Leeds, and they were soon married. She was 29 and he was 35. Maria's parents had already died, so did not influence her choice, but her friends did not fully approve of her marriage. Curates did not tend to be wealthy, plus they noted that Patrick was eccentric. For example, in anger he would damage furniture, and he regularly fired his pistol (which he kept for self-defence) out of the window.

Until 1823, the children were educated at home. In that year, Maria and Elizabeth went to a boarding school in Wakefield. However, Mr Brontë couldn't afford to send all his daughters there. He then learned that Rev Carus Wilson had founded the Clergy Daughters' School with fees set at a level that his fellow clergymen could afford. All the girls except Anne were sent there in 1824. Rev Wilson ran the school on a tight budget. Meagre and unhealthy food rations, plus unheated buildings and long walks to church from the school, meant that disease was regularly able to take hold. Maria fell ill in 1825 and was eventually taken home by Mr Brontë, but she died on 6 May. Elizabeth was sent home soon afterwards, as she had developed symptoms of consumption (tuberculosis), and she died on 15 June.

As the Brontës only son, Patrick Branwell was expected to be able to grow up to get a good job and provide for his sisters until they were married.

He was tutored by his father for many years. He showed some talent for painting, and began planning to become an artist, which was a potentially lucrative career in the days before photography. He produced a portrait of Charlotte, Emily and Anne (including a portrait of himself that he later painted a pillar over).

Unlike his shy sisters, he was sociable and handsome. He joined a boxing club and a Freemason's Lodge and became secretary of the local Temperance Society. He played the church organ

He went to London in 1835, but nothing came of any plans for him to enrol at the Royal Academy to study art, so he returned to Haworth and put his energies into writing. He produced a translation of the classical poet Horace's Odes. He submitted poetry to Blackwood's Magazine, but his work was not published, in spite of (or probably because of) the begging letters he sent. He wrote directly to the poet Wordsworth in 1837, but received no response.

After this lack of success as a writer, he returned to art - at the age of 21 he established a portrait studio in Bradford, thanks to financial help from his father. However, the venture was not successful, so he was summoned back to Haworth when he fell into debt after a few months.

In 1839, Branwell became a tutor to the Postlethwaites in Broughton-in-Furness for six months - by then he was regularly drinking whisky and getting so drunk he would wake up at home without knowing how he got there. Then he became a booking clerk at a railway station on the Leeds and Manchester line4, as he wanted a job where he could meet more people. However, he was dismissed for not preparing the accounts accurately enough.

In 1843, he became a tutor at Thorp Green, the home of the Robinson family, where Anne was working as a governess. However, in 1845 he lost that job, too, having being dismissed by Mr Robinson for bad behaviour - Branwell had become infatuated with Mrs Robinson and caused a scandal.

It is not known exactly what happened, but it certainly affected Branwell. In a letter attributed to him, it is written that Mrs Robinson was 'too fond of me'. He described her as 'her I love best on earth,' and when her husband died in 1846 he wrote that she had sent him a message to tell him that she had become a widow. However, in spite of his hopes that she would continue to return his affection, she had only limited correspondence with Branwell after that, and married a wealthy widower in 1848.

In his sorrow, Branwell turned again to alcohol, and to laudanum, an opium-based drug. He tried to write a novel, but struggled with the 'mental effort'. He died of 'chronic bronchitis-marasmus' (a lung condition probably associated with tuberculosis) on 24 September, 1848. He was 31.

Unlike their brother, the three sisters were talented and also able to work hard. Not only did they have to apply themselves to their studies and their writing, but also they had to do housework - the housekeeper Tabby could not do everything herself, especially at times when she was not in the best of health (she lived into her 90s, having been at Haworth Parsonage for around 30 years).

At first they aimed to get a good education so as to take the role of governess, a job considered suitable for women at that time. Charlotte and Anne were successful in gaining positions. However, the work was hard, as they struggled to relate to children so different from the children they had been, and they had little leisure time.

Their next plan was to start their own school. In order to be able to compete with the proprietors of other small schools, they needed qualifications, so Charlotte and Emily spent some time at a finishing school in Brussels, Belgium. They learned French, German and Literature. They also developed their teaching skills: Charlotte became an English teacher, and Emily gave piano lessons to her fellow pupils.

After their aunt's death in 1842, they tried to set up their planned school in Haworth, but did not manage to recruit any pupils. In 1845, Charlotte discovered that both Emily and Anne had written poems, so resolved instead to work towards achieving their dream of becoming published authors.

They chose the pseudonyms Currer, Ellis and Acton Bell - not women's names, but not specifically men's names, either. Charlotte said: 'the ambiguous choice being dictated by a sort of conscientious scruple at assuming Christian names positively masculine, while we did not like to declare ourselves women, because - without at the time suspecting that our mode of writing and thinking was not what is called 'feminine' - we had a vague impression that authoresses are liable to be looked on with prejudice.'

The book of poems was published in 1846 at their own expense (30 guineas) but only two copies were sold that year. However, they had all started working on novels. The first to be finished was Charlotte's The Professor, inspired by her time in Brussels. Anne's Agnes Grey and Emily's Wuthering Heights were first to be accepted for publication, but Jane Eyre, the novel Charlotte became most famous for, was the first to be published, in 1847.

After Branwell died in 1848, Emily developed a cough. She had tuberculosis and she died on 19 December that year, aged 30. Anne became ill with tuberculosis soon afterwards. On 24 May, 1849, Charlotte and her friend Ellen Nussey took Anne to Scarborough for the sea air. They visited York Minster en route, and then Anne returned to the place she had been familiar with during her time as a governess. Anne died there on 28 May, 1849, at the age of 29.

Alone, Charlotte continued working on her next novel, Shirley. It featured characters based on people she was acquainted with, including Arthur Nicholls, the curate at her father's church. It was published in 1849. Her last finished novel was Villette, which was published in 1853.

Mr Nicholls proposed to Charlotte in December 1852, revealing feelings Charlotte never thought he possessed. Mr Bronte strongly disapproved, so Mr Nicholls resigned from his role as curate. He went to Pontefract, but wrote to Charlotte, and she eventually wrote back to him. At first Charlotte merely pitied him, but then she began to grow fond of him. She told her father, and he eventually consented to their marriage, not least because the replacement curate wasn't as good as Mr Nicholls had been, and Charlotte could continue to live with him as well as her husband.

They were married on 29 June, 1854. Mr Nicholls was perhaps too attentive, encouraging her to go on walks rather than write, but her health improved and she began a new novel called Emma. However, that winter she caught a cold and then developed nausea and feelings of faintness. She found she was pregnant. In her weakened state, it was likely that she had developed tuberculosis. Her husband cared for her and provided 'the best earthly comfort that ever woman had'. She died on 31 March, 1855, aged 38.

Four months after Charlotte died, Mr Brontë invited her friend and fellow author Mrs Elizabeth Gaskell to write a biography of Charlotte, to avoid unauthorised and inaccurate pieces being written about her in magazines. The biography Mrs Gaskell produced was not the most accurate, as she didn't have access to all of Charlotte's letters and writings, plus she incorporated her own judgement on matters such as Branwell's disgrace rather than trying to find out both sides of the story. However, the book helped to increase the fame of Charlotte and her sisters.

Souvenir hunters began to contact Mr Brontë and Mr Nicholls. Some of Charlotte's letters were cut up so that fragments of her handwriting could be sent to them. However, many survived for later biographers to explore (Charlotte wrote more than 950 letters during her lifetime).

Although Patrick Brontë had been in poor health for many years, having trouble with his lungs, his digestive system and his eyes, he died at the age of 84 in 1861 after having outlived his wife and all his children. Arthur Nicholls returned to Ireland that year, and died in 1906.

The Brontë Society was founded in 1893 to preserve the memory of Charlotte, Emily, Anne and their family. Haworth Parsonage is now a museum telling the story of the Brontë family. 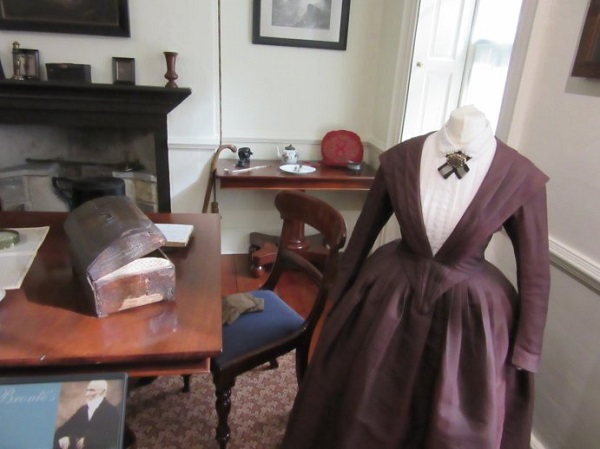 1 Bronte is a town on the island of Sicily. In Greek Mythology, Bronte is goddess of thunder.2Foreshadowing his daughters' careers, he published several books of poetry around that time.3She lived with them until she died in 1842.4The village of Haworth would not be served by a railway until after Branwell's death. The Keighley & Worth Valley Railway opened in 1867.