You think academic writing is bad now? 100 years ago, they didn't have postmodernism. But they had condensed books. Journalist and editor Edwin Grozier paid a bunch of professors and whatnot to produce the Cliff Notes version of the classics for 100 Best Novels Condensed. Some of these epics, especially those by Bulwer Lytton, are best appreciated in small doses, anyway. Enjoy this version of 'Ben Hur' as summarised by a Harvard professor, who probably enjoyed the honorarium. Thank us later.

Lew S Wallace was born in 1827 at Brookville, Indiana1, and perhaps was, quite unconsciously, potent in spreading the idea, dear to some, that in that state is located the literary center of this country. He died in 1905.

Like the students of to-day in the great struggle, he left his books for the Mexican War. He served again in the Civil War and rose to be Major-General in the Volunteer army. As after the Mexican episode, he returned again to the law; he was Governor of Utah from 1878 to 1881, and minister to Turkey from 1881 to 1885, when as a good diplomat he won the esteem of the late unlamented Abdul Hamid and could really put through business with that scientifically dilatory tyrant2.

He is known by his three books 'The Fair God' (1873), 'Ben-Hur' (1880), and 'The Prince of
India' (1893). The first is a very clever reconstruction of the story of the conquest of Mexico
by the Spaniards. The reader feels a great sympathy with the highly developed natives who fell
helpless before the superior arms of the invaders.

The story, however, is by no means to be put in the same class with 'Ben-Hur.' The skill, the knowledge, the reverence with which the story of Christ as told (largely through the lives of others) have made “Ben-Hur” one of the books to take a secure hold on the public, both as book and on the stage, where the famous chariot-race has won a classic place. 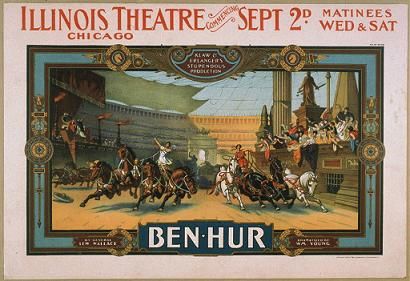 BEN-HUR: A Tale of the Christ by LEW WALLACE

The workmen put their hands to the cross and carried it, burden and all, to the place of planting. At a word they dropped ‘the tree into the hole; and the body of the Nazarene also dropped heavily and hung by the bleeding hands. Still no ery of pain – only the exclamation divinest of all recorded exclamations, 'Father, forgive them, for they know not what they do.' The cross, reared now above all other objects, and standing singly out against the sky, was greeted with a burst of delight; and all who could see and read the writing upon the board over the Nazarene’s head made haste to decipher it. Soon as read, the legend was adopted by them and communicated, and presently the whole mighty concourse was ringing the salutation from side to side, and repeating it with laughter and groans:

The sun was rising rapidly to noon; the hills bared their brown breasts lovingly to it; the more distant mountains rejoiced in the purple with which it so regally dressed them. In the city the temples, palaces, towers, pinnacles, and all points of beauty and prominence seemed to lift themselves into the unrivaled brilliance, as if they knew the pride they were giving the many
who from time to time turned to look at them. Suddenly a dimness began to fill the sky and cover the earth – at first no more than a scarce-perceptible fading of the day; a twilight out of time; an evening gliding in upon the splendors of noon. But. it deepened, and directly drew attention, whereat the noise of the shouting and laughter fell off, and men, doubting their senses,
gazed at one another curiously; then they looked to the sun again; then at the mountains, getting farther away; at the sky and the near landscape, sinking in shadow; at the hill upon which the tragedy was enacting; and from all these they gazed at one another again, and turned pale, and
held their peace.

'It is only a mist or passing cloud,' Simonides said, soothingly, to Esther, who was alarmed. 'It will brighten presently.'

Ben-Hur did not think so.

'It is not a mist or a cloud,' he said. 'The spirits who live in the air – the prophets and saints – are at work in mercy to themselves and nature. I say to you, O Simonides, truly as God lives, He who hangs yonder is the Son of God.'

And leaving Simonides lost in wonder at such a speech from him, he went where Balthazar was kneeling near by, and laid his hand upon the good man’s shoulder.

'O wise Egyptian, hearken! Thou alone wert right – the Nazarene is indeed the Son
of God.'

lthazar drew him down to him and replied, feebly, 'I saw Him a child in the manger where He was first laid; it is not strange that I knew Him sooner than thou: but, oh, that I should live to see this day! Would that I had died with my brethren! Happy Melchior! Happy Gaspar!'

'Comfort thee! said Ben-Hur. 'Doubtless they too are here.'3

Within the frame of the story of Christ is told the tale of Ben-Hur, beginning with the appearance of the three Wise Men, Balthazar, Melchior, and Gaspar, and ending with the sublime tragedy on Golgotha. From the days of the scenes at the manger until the culmination of the great story, the figure of Christ appears but once, and that for a moment, but over all that happens in the intervening years hovers the gentle spirit; thrilling as the episodes are in themselves, strongly as the characters are portrayed, they are but a preparation for what is to follow, a mere worldly setting for Him who was too great for all save a few to understand at that time.

Some twenty-one years after the scenes at the manger, a young Jew, Ben-Hur, a prince in Jerusalem, rich, happy, ambitious, was standing by a parapet of his palace, watching the progress of Valerius Gratus, imperial governor of Judea. As the Roman passed beneath the wall amid the jeers and insults of the Jews, the young prince leaned far out to see the new governor, a loose tile
was displaced, and, as bitter fate would have it, fell full upon the governor. The accident was not fatal, but it was an opportunity for exemplary justice, especially as the estates of the Jews were very desirable to the governor and his friend Messala, hitherto almost brother to Ben-Hur though the latter had been. The unhappy Jew was sent as a rower to the galleys, where the limit of life was at most but a year. His mother and sister were immured in a secret cell in the Tower of Antonia, where they were doomed to the fate of lepers. The only. act of kindness Ben-Hur could remember during the years that followed was on the day he was dragged to the galleys. 'The hand laid kindly upon his shoulder awoke the unfortunate man, and, looking up, he saw a face he never forgot – the face of a boy about his own age, shaded by locks of yellowish bright chestnut hair; a face lighted by dark-blue eyes, at the time so soft, so appealing, so full of love and holy purpose, that they had all the power of command and will.' That was in Nazareth.

Now Ben-Hur in time became a rower on the flagship of Arrius, duumvir and admiral; how the flagship was destroyed in a great sea-fight; how Ben-Hur rescued the admiral, became his adopted son and his heir, learned at Rome the manner of Roman war and Roman sports, returned to the East a Roman officer in the train of a consul setting forth on a great campaign against the Parthians; how he discovered that his father’s old steward, Simonides, had succeeded in saving from confiscation the vast intangible wealth of the Hurs and had multiplied it many times, till the young Roman-Jew was the richest private citizen in the world; the discovery that Messala was entered for the highest stake in the great sporting event of the Orient; how Ben-Hur won the affection of Ilderim, the Arab sheik, who had entered his steeds of the desert for the great event – all this leads up to the dramatic encounter of the famous chariot-race. The author drew his description of the race from one written over twenty-three hundred years ago by the tragic poet Sophocles4. It is one of the curiosities of literature that the great scene, through the pages of Lew Wallace’s novel, has become as famous on our stage as it was so long ago on that of Greece.

By his victory in the arena Ben-Hur exacted ancient Jewish justice on his hated adversary, who was crushed in body and impoverished in fortune – he had wagered on his success all the wealth he had stolen from his former friend. The victor almost fell prey, however, to the vampire daughter of Egypt who was rival for his love with the gentle Jewish Esther. But henceforth his thoughts were concentrated on Him who was attracting all eyes. Was he Messiah
or king? Ben-Hur, in his hatred of Rome, in his pride of race, dreamed only of a king of this world, who should right ancient wrongs and exalt his chosen people. And so he threw himself with all his force, with all his wealth, with all the knowledge gained at Rome, into making secure and strong the way of the king whom he would follow. But it was for one supreme in things spiritual rather than material that the way was being made ready. And Ben-Hur’s mother, rescued
with her daughter from her long imprisonment by a chance change of jailers, but hopeless lepers both, saw the truth sooner than her son.

'O Master, Master!' she cried as He passed upon the road, 'Thou seest our need; Thou canst make us clean. Have mercy upon us – mercy!'

'Believest thou I am able to do this?' He asked.

'Thou art He of whom the prophets spake – Thou art the Messiah!' she replied. His eyes grew radiant, His manner confident.

'Woman,' He said, 'great is thy faith; be it unto thee even as thou wilt.'

And so, in the end, Ben-Hur recognized what Balthazar had known from the beginning. 'O wise Egyptian, hearken! Thou alone wert right – the Nazarene is indeed the Son of God!'

1Not Brookville, Pennsylvania, which produced less famous but more readable writers.2If anyone can enlighten us as to why the Sultan of Turkey was 'scientifically dilatory', we'd love to hear it.3If this extract from Ben Hur has not convinced you that you'd rather do almost anything but read this novel, you're hopeless. Bring on a cinematic chariot race.4In Electra, according to some classicists.