Trilby and Svengali: or, How to Be So Un-Woke You Write in a Coma

In 1894, Daphne du Maurier's grandfather George wrote a runaway bestseller called Trilby. It became famous for its portrayal of 'bohemian' artists in Paris and for its sinister character Svengali. The term 'Svengali' became a catchphrase for a sort of manipulative behind-the-scenes power broker. (And yes, the character is antisemitic, so we wouldn't let du Maurier get away with it today.)

There were plays and movies. If you'd like to see a pretty good one from 1931, John Barrymore's Svengali is a really good Expressionist film.

Here's a sample of the book, which you can read at archive.org.

PS: Besides being 'racy', Trilby introduced the phrase 'in the altogether', meaning 'nude'. In this novel – which admittedly is almost 500 pages long – George du Maurier manages to insult just about every type of person in the world who is not an English male between 25 and 45. Talk about limiting your demographic… 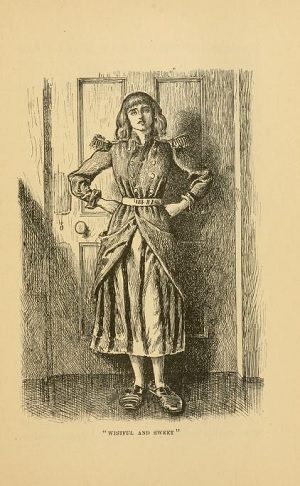 It was the figure of a very tall and fully developed young female, clad in the gray overcoat of a French infantry soldier, continued netherwards by a short striped petticoat, beneath which were visible her bare white ankles and insteps, and slim, straight, rosy heels, clean cut and smooth as the back of a razor; her toes lost themselves in a huge pair of male list slippers, which made her drag her feet as she walked.

She bore herself with easy, unembarrassed grace, like a person whose nerves and muscles are well in tune, whose spirits are high, who has lived much in the atmosphere of French studios, and feels at home in it.

This strange medley of garments was surmounted by a small bare head with short, thick, wavy brown hair, and a very healthy young face, which could scarcely be called quite beautiful at first sight, since the eyes were too wide apart, the mouth too large, the chin too massive, the complexion a mass of freckles. Besides, you can never tell how beautiful (or how ugly) a face may be till you have tried to draw it.

But a small portion of her neck, down by the collarbone, which just showed itself between the unbuttoned lapels of her military coat collar, was of a delicate privetlike whiteness that is never to be found on any French neck, and very few English ones. Also, she had a very fine brow, broad and low, with thick level eyebrows much darker than her hair, a broad, bony, high bridge to her short nose, and her full, broad cheeks were beautifully modelled. She would have
made a singularly handsome boy.

As the creature looked round at the assembled company and flashed her big white teeth at them in an all-embracing smile of uncommon width and quite irresistible sweetness, simplicity, and friendly trust, one saw at a glance that she was out of the common clever, simple, humorous, honest, brave, and kind, and accustomed to be genially welcomed wherever she went. Then suddenly closing the door behind her, dropping her smile, and looking wistful and sweet, with her head on one side and her arms akimbo, 'Ye're all English, now, aren't ye?' she exclaimed.
'I heard the music, and thought I'd just come in for a bit, and pass the time of day: you don't mind? Trilby, that's my name – Trilby O'Ferrall."'

She said this in English, with an accent half Scotch and certain French intonations, and in a voice so rich and deep and full as almost to suggest an incipient tenore robusto; and one felt instinctively that it was a real pity she wasn't a boy, she would have made such a jolly one1. 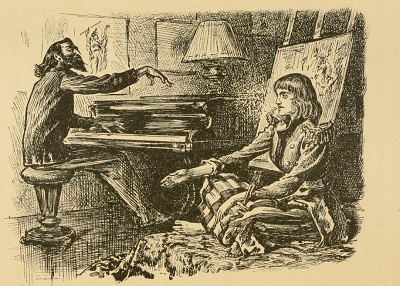 First, a tall, bony individual of any age between thirty and forty-five, of Jewish aspect, well-featured but sinister. He was very shabby and dirty, and wore a red beret and a large velveteen cloak, with a big metal clasp at the collar. His thick, heavy, languid, lustreless black hair fell down behind his ears on to his shoulders, in that musicianlike way that is so offensive to the normal Englishman2. He had bold, brilliant black eyes, with long, heavy lids, a thin, sallow face, and a beard of burnt-up black which grew almost from his under eyelids; and over it his mustache, a shade lighter, fell in two long spiral twists. He went by the name of Svengali, and spoke fluent French with a German accent, and humorous German twists and idioms, and his voice was very thin and mean and harsh, and often broke into a disagreeable falsetto.

His companion was a little swarthy young man – a gypsy possibly – much pitted with the smallpox, and also very shabby. He had large, soft, affectionate brown eyes, like a King Charles spaniel. He had small, nervous, veiny hands, with nails bitten down to the quick, and carried a fiddle and a fiddlestick under his arm, without a case, as though he had been playing in the street.

'Are you fond of music?' asked Little Billee.

'Oh, ain't I, just!' she replied. 'My father sang like a bird. He was a gentleman and a scholar, my father was. His name was Patrick Michael O'Ferrall, fellow of Trinity, Cambridge. He used to sing ' Ben Bolt4.' Do you know ' Ben Bolt5 '?'

'Oh, certainly, if you will be so kind.'

Miss O'Ferrall threw away the end of her cigarette, put her hands on her knees as she sat cross-legged on the model-throne, and sticking her elbows well out, she looked up to the ceiling with a tender, sentimental smile, and sang the touching song6.

From that capacious mouth and through that high-bridged bony nose, there rolled a volume of breathy sound, not loud, but so immense that it seemed to come from all round, to be reverberated from every surface in the studio. She followed more or less the shape of the tune, going up when it rose and down when it fell, but with such immense intervals between the notes as were never dreamed of in any mortal melody. It was as though she could never once have deviated into tune, never once have hit upon a true note, even by a fluke – in fact, as though she were absolutely tone-deaf and without ear, although she stuck to the time correctly enough.

She finished her song amid an embarrassing silence. The audience didn't quite know whether it were meant for fun or seriously. One wondered if she were not paying out Svengali for his impertinent performance of 'Messieurs les etudiants10.' If so, it was a capital piece of impromptu tit-for-tat admirably acted, and a very ugly gleam yellowed the tawny black of Svengali's big eyes11. He was so fond of making fun of others that he particularly resented being made fun of himself – couldn't endure that any one should ever have the laugh of him12.

At length Little Billee said: 'Thank you so much. It is a capital song13.'

'Yes,' said Miss O'Ferrall. 'It's the only song I know, unfortunately. My father used to sing it, just like that, when he felt jolly after hot rum and water. It used to make people cry; he used to cry over it himself, I never do. Some people think I can't sing a bit. All I can say is that I've often had to sing it six or seven times running in lots of studios. I vary it, you know – not the words, but the tune. You must remember that I've only taken to it lately. Do you know Litolff ? Well, he's a great composer, and he came to Durien's the other day, and I sang 'Ben Bolt,' and what do you think he said? Why, he said Madame Alboni couldn't go nearly so high or so low as I did, and that her voice wasn't half so strong. He gave me his word of honor. He said I
breathed as natural and straight as a baby, and all I want is to get my voice a little more under control. That's what he said.'

The rest of the plot is kind of obvious when you think about it from the point of view of a cheap 1890s bestseller. Trilby has strong vocal potential, but can't carry a tune in a bucket. Svengali, however, is a hypnotist. When he puts her under, she sings like…well, not an angel, but like what people in 1890s thought was good opera singing, for some reason we cannot quite fathom. Have our ears improved that much? Anyway, they go around Europe and make a fortune, until all that hypnosis gives both of them a serious etheric disease and they both die of bogus music and not being English, or something. There's probably supposed to be a moral in there, but I wouldn't want to bet on it in the 21st Century. So now you know.

One more thing: a stage production of this mess popularised the 'trilby hat', so when you see a goombah in a trilby, remember that this is another thing to blame George du Maurier for.

1No comment. Seriously. No comment.2I don't have to say anything here, do I? Tell me I don't.3I'm not sure, but I think he said his friend played the violin.4Oh, heck, You have to listen to it once in your life. Don't bother to thank me.5And don't you wish you didn't?6It touches something in Your Editor. This touching is not pleasant. In fact, it is bad touching.7The woman's name is not 'Alice Ben Bolt'. It is Alice. Ben Bolt is the idiot addressed in the song.8So brown? How much browner can you get than brown? Gag me with a spoon.9Please bear in mind that the recording in the link above is considered to be a good rendition of 'Ben Bolt'. It is hard to imagine a bad one.10The company find it annoying that Svengali, whom they do not like, is a really good pianist, and his friend a really good violinist. Life is so unfair to Englishmen by not giving them all the talent.11If you find an example of 'tawny black eyes' in nature, h2g2, please send us the photo. We'll make a fortune.12We're not taking this off this author. Go suck an egg.13Oh, rath-uh.