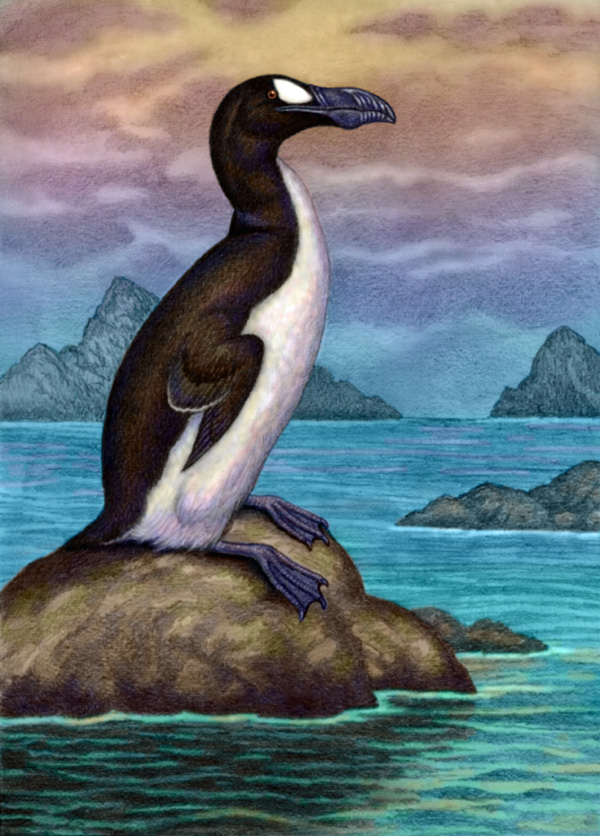 Another day, another extinct species. This day I share with you my painting of a Great Auk, Pinguinis impennis ('penguin without flight feathers'). Yes, that scientific name gives you a clue: this was actually the first bird called a 'penguin'. But auks are not closely related to penguins. In actuality, penguins were named after the great auk, which was known to humans first. They reminded the sailors who first ventured into southern oceans and saw them of the auks they knew back home. And subsequently, great auks (and other auks also) got renamed 'auks' after their name in Scandinavian languages. Auks only occur in the northern hemisphere, penguins in the south.

This wasn't the only auk, as the name should clue you in, but merely the largest – at least the largest in historical times. A few prehistoric auks were larger. Modern auks include guillemots or murres, razorbills and the well-known and well-loved puffins. All modern auks can fly; the great auk could not. The remaining auks also use their wings for 'flying' underwater, much in the manner of penguins; the great auk specialized in this to the point where it could no longer use its wings for propelling it through the air, thus resembling the penguins even more. The great auk was also much larger than the remaining auks. The present heaviest auk species is the Thick-billed Murre, which can reach just over a kilogram/about two pounds. The great auk could exceed a weight of 5 kg/11 lbs, and stood up to 85 cm/34" tall, making it as big as a medium-sized penguin. Even its coloration was very penguin-like, blackish above and white below, the scheme interrupted only by a large white patch in front of each eye. That's in its summer coat; its winter plumage was a bit less neat, with a white throat and a streak extending behind its eye. It had a very stout bill, marked with parallel ridges towards the tip. In many ways it was similar to the surviving razorbill, Alca torda, and is sometimes included in the same genus.


Because of being unable to fly, greak auks were vulnerable on land. But they didn't come onto land much. Most of their lives they spent swimming in the ocean, even resting and sleeping while drifting on the waves. They could hold their breaths for about 15 minutes, and dive to a depth of 75 m/250'. There are even claims that they could dive to a depth of a kilometre/1000 yards – but this sounds a bit extreme! They preyed mainly on fish, also on other ocean critters such as crustaceans. They used their small wings for speedy swimming and underwater manoeuvring. Their webbed feet were mainly used for steering. They preferred swimming in shallow water, but sometimes were found as much as 500 km/300 miles from the nearest land.


The one reason why the great auks still needed to come onto the land, was to breed. No bird has yet mastered the trick of keeping its eggs inside its body until hatching, as can be done by some living reptiles and also by some of those great extinct ocean reptiles. So, auks, like penguins, need a high, dry place to lay their eggs. Some modern auks nest on high cliffs, where their eggs are out of reach of most predators. But because great auks were flightless, they couldn't do this. They sought out islands that were far away from the mainland and free from mammalian predators like Arctic foxes. The islands also needed to be not too steep, so the auks could waddle up onto the beaches. Suitable islands were few and far between, and therefore the auks congregated in great numbers wherever they did breed. These breeding islands were mainly around the British Isles, Scandinavia, Iceland, Greenland, and eastern Canada and the northeastern USA. In earlier times they also lived on islands off the Atlantic coasts of France and Spain, and as far south as Florida; earlier still they even occurred in the Mediterranean Sea!


On such suitable islands, they mated in the summer and the females lay their eggs on the bare rocks. We don't know much about their breeding habits since they were little studied before going extinct. They seemed to have mated for life, and the female lay just a single egg per season – unless that egg was lost, in which case she could lay a replacement egg. The egg was oval, narrowing towards one end, which would have caused it to roll in a small circle rather than a straight line, to prevent the likelihood of it rolling away and being lost. Each egg was different from the others, marked with a unique pattern of scribbles, which might have allowed the parents to know it on sight. Male and female both incubated the egg, standing upright as they kept it on top of their feet rather than squatting down on it. The chick is said to have been covered in grey down, and was initially fed by both parents, who regurgitated semi-digested seafood to it. At the age of only two or three weeks, the chick would abandon the nest and start swimming with its parents. They still cared for it, even carrying the chick on their backs as they swam, but the chick soon learnt to catch its own food, initially ingesting a large amount of plankton, the tiny marine critters that drift with the ocean currents. They matured slowly, and started reproducing only at the age of four to seven years.


So why did they go extinct? First of all, for a very long time they did NOT go extinct. The species might have lived for a million years or more, prior to humans arriving on its scene. And before it, there were other very large, flightless auks living in the northern oceans and breeding on remote islands, proving that it was a very viable mode of life. The present-day penguins prove that it is still so. So there was nothing necessary or inevitable about its extinction. In its heyday it thrived, nesting in vast numbers. And it even survived the onslaught from humanity for a very long time. Already 100 000 years ago, it was being hunted by Neanderthal people. Low-intensity hunting continued for most of that time over most of the species' range, though humans only arrived in the New World much later. The species was important to these early humans, and they were depicted on cave walls and their skins and bones used as decorations. But only with modern, 'western' humanity did the hunting pressure increase to disastrous levels. People saw these auks as an almost inexhaustible resource. Their eggs were taken, they were hunted for food, for oil, for their soft downy feathers, and even as fishing bait. They were never much afraid of humans, but even if they were, it wouldn't have made much of a difference since they wouldn't have been able to escape. I will not even tell you of the sickening things the humans did to these poor, defenseless birds. Suffice to say that if the animal world could form an opinion of humanity, we would be their demons and their monsters.


In consequence, the numbers of great auks plummeted. There were laws trying to limit their exploitation as early as the sixteenth century, but people paid little attention to these. When science finally figured that they might be heading to the point of no return, there was a rush for getting 'specimens' of eggs as well as skins so long as these were still to be had. The last couple of great auks were strangled in 1844 on the island of Eldey off Iceland. The skin of the male of these now resides in a museum in Brussels; the female might be in Cincinnati. One final individual was glimpsed in 1852. Today, the legacy of the species comes to about 78 remaining skins, 75 eggs, and 24 skeletons. That's what's left of a species that once numbered in the millions of living, flourishing birds. That, and lots of depictions and references in popular culture – most people today in Europe and America have at least heard of the Great Auk – but that can't replace the birds themselves. The only 'hope' … which is extremely slim and something we shouldn't even think about lightly … for bringing them back, is through genetic engineering from the DNA that's left in their remains…